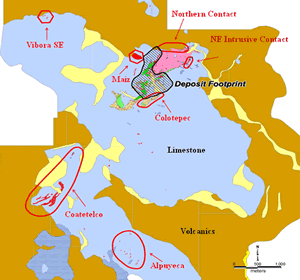 Map of the Cerro Jumil gold/silver property in Mexico with the new drill targets in red. Four new target areas are in close proximity to the known mineralized zone and will be tested during the current drill program.

Esperanza Resources (EPZ – $1.65) published results of an independently prepared Preliminary Economic Assessment (PEA)* for its 100% owned Cerro Jumil gold/silver project in Morelos, Mexico. The PEA shows that, at a very conservative gold price of $1,150 per ounce, the project has an after tax Net Present Value (NPV) of $122 million at a 5% discount rate generating an Internal Rate of Return (IRR) of 26%. At a near present gold price of $1,700 per ounce, Cerro Jumil produces an after tax NPV of $309 million and an IRR of 53%.

The comparison of Cerro Jumil’s EPV with Esperanza’s current market capitalization of $83.7 million, makes it clear that the further development of the property will undoubtedly have a strong and positive impact on the Company’s stock price.

The Preliminary Economic Assessment for Cerro Jumil is based on the 2010 resource estimate of 935,000 gold equivalent ounces in the measured and indicated categories, and 252,000 gold equivalent ounces in the inferred category. Very interesting to know is that Esperanza is currently expanding that resource through a 15,000 meter expansion and in-fill drill program. First analytical results, announced in July of this year, showed there are additional mineralized veins between 1.00 and 3.85 grams of gold per tonne on the property.

Furthermore, mapping and sampling of the greater Cerro Jumil concessions (15,025 hectares) reveals 10 additional target areas that warrant further exploration. Four target areas are in close proximity to the known mineralized zone and will immediately be tested during the current drill program. The six other target areas are about 3 to 6 kilometers outside the known resource area. Permits and community approvals will need to be obtained first before these can be drilled. We expect more drill results to be announced in the next few weeks.

Summary of the Preliminary Economic Assessment

The PEA has evaluated two methods for open-pit mining and heap-leach** gold recovery. In the first method, the mined rock will be crushed to a maximum size of 55mm (approx. 2 inches). From there, it will be conveyed to the leach pad and irrigated with recovery solutions. Gold will be recovered from pregnant solutions utilizing carbon adsorption, subsequent electrowinning and on-site smelting to produce a doré***. The doré will be shipped off-site for final refining. This is considered the Base Case.

The second method is identical to the first one, except that the mined rock will directly be fed to the heap leach pads without being crushed first. This is called the Run-of-Mine (ROM) alternative.

With an average production of 106,000 ounces of gold per year, Cerro Jumil is a significant project. It’s economically viable with an NPV of $122 million at a very conservative $1,150/oz gold price. Start-up and closure costs of $120.6 million are mild and operating costs of $499 per ounce of gold is fairly low.

Based on the 2010 resource estimate, the PEA shows that Cerro Jumil is a technically straight-forward and economically viable project with a Net present Value of $309 million at today’s gold price. Moreover, Esperanza is conducting a 15,000 meter expansion and in-fill drill program, from which the first results indicate that the resource will be increased.

Esperanza is well-funded with $23 million in its treasury. This is more than sufficient for continued drilling and feasibility studies.

The Company now plans to move the project into a full feasibility study in the course of 2012 with the ultimate goal of advancing Cerro Jumil to production. Esperanza is a Buy Recommendation.

* The Preliminary Economic Assessment (PEA) is one of many steps which have to be taken prior to making a decision to start production at a project. The report’s main content is an economic analysis of the potential viability of a mineral resource. Next, a Pre-feasibility Study needs to be completed, followed by a Detailed Feasibility Study. At the same time, an Environmental Assessment has to be carried out.

** Heap leaching is an industrial mining process to extract metals and other compounds from ore. The mined ore is heaped so it can be irrigated with a dilute alkaline cyanide solution to dissolve the valuable metals. The solution then percolates through the crushed ore until it reaches the storage pond. The leach solution containing the dissolved minerals is then collected and treated in a process plant to recover up to 75% of the target mineral. The dilute cyanide solution is either re-used in the heap-leach-process or sent to an industrial water treatment facility where the residual cyanide is treated and residual metals are removed.

*** Gold doré (pronounced gold doh-rey) is a bar of semi-purified gold. After being mined, the first stage in the purification process of the gold ore produces a cast bar (gold doré) that is approximately 90% gold. The other 10% is mostly metals like silver and copper.