News » No Summer Doldrums at Tecogen

No Summer Doldrums at Tecogen

Tecogen Inc. (TGEN – $3.40), the manufacturer of ultra-efficient and clean natural gas powered heating and cooling equipment, is having an excellent summer in terms of machine sales. Since July 1st, it announced the sale of no less than fourteen units. In addition, it is quite well possible that not all contract wins were made public.

The past week, Tecogen sold an Ilios high efficiency air-source water heater to a sports and fitness facility near Bangor, Maine. As there is no natural gas distribution system in the region, this Ilios unit will run on propane and will consume only half the energy compared with the oil-fired water heater it replaces.

The Ilios high-efficiency water heater operates like an electric heat pump but uses a gas engine instead of an electric motor to power the system.

The water heater, uses a heat pump, which captures warmth from outdoor air even if it is moderately cool outside. Heat pumps work somewhat like a refrigerator, but in reverse. Refrigerators extract heat from inside the refrigerator and move it outside the refrigerator. Heat pumps extract heat from outside and move it indoors. In both cases, fluids move the heat around by flowing through heat exchangers. At various points the fluids are compressed or expanded, which absorbs or releases heat.

The gas engine’s waste heat is recovered and used in the process, unlike its electric counterpart, which runs on power that has already lost its waste heat. The net effect is that the efficiency of an Ilios’ heat pump far surpasses that of conventional boilers for water heating. This translates directly to lower fuel consumption and, for heavy use customers, significantly lower operating costs. Gas engine heat pumps deliver efficiencies in excess of 200%.

Tecogen Co-CEO Benjamin Locke stated, “Ilios enables us to compete in markets that may not be ideally suited for our other core products. It dramatically expands our reach to customers who might not otherwise consider Tecogen.” 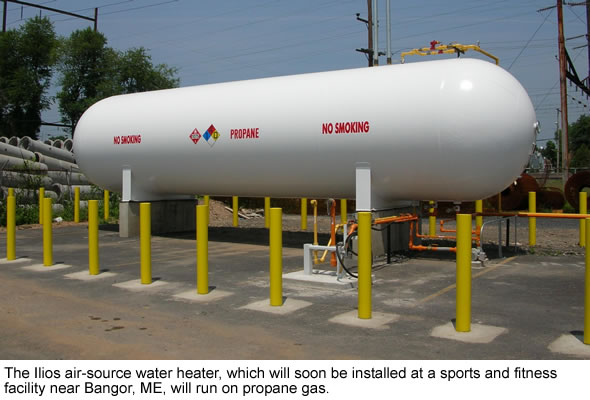 The 625 kilowatt cogeneration system will soon supply the 85,000 square foot facility with electricity and thermal energy for space heating in the colder months and air-conditioning in the warmer periods. Although no details were provided, it is estimated that the order was worth around $2 million.

This order is a true testament of Tecogen’s top notch technology. After all, the pharmaceutical company would never have chosen Tecogen’s technology if there were even the slightest concern of reliability.

The TECOCHILL is exceptionally useful, as it consumes virtually no electricity thanks to its natural gas powered engine. All in all, it lowers a building’s cooling costs by 30 to 60 percent. In addition, the chillers offer optional “waste” heat that is available whenever it is running. The free engine heat can be recovered and used to offset boiler gas that would have been needed to meet the dehumidification requirements.

A few days later, three more TECOCHILLs were sold. In this case the order is from an indoor cannabis growing operation near Tampa, FL. The order marks Tecogen’s first sale into Florida’s recently legalized medical marijuana business and the sixth transactions with the indoor cannabis industry.

The units will provide 450 refrigeration tons of cooling for a 40,000 square foot (~3,700 square metre) grow facility, which is being retrofitted out of an existing facility.

Because TECOCHILL uses very little electricity, it helps customers avoid expensive and generally time consuming electric service upgrades from their utility. Older buildings that are being retrofitted for use as indoor growing facilities frequently do not have the electrical infrastructure needed to support the immense electrical needs required by both the lighting as well as the HVAC system needed to remove the heat generated by the lighting.

Given the expected growth of the cannabis industry, it is going to get competitive for growers very quickly. To date, some 240 applications to grow and sell marijuana have been submitted in Massachusetts alone. Once the price per pound starts to decline as more growers enter the market, only those who truly have a handle on their energy cost and usage will be successful.

Tecogen is dramatically expanding its reach into the indoor agriculture industry. Although so far a majority of its sales were to the cannabis industry, growing leafy greens, herbs, and tomatoes also holds substantial promise for Tecogen because of the exceptional cost savings that are generated with the Company’s chillers.

The final sale of July was for another two TECOCHILL chillers, this time to an office building in Boston, MA. The units will enable the building to reduce its annual cooling-related energy costs by well over 50% through the avoidance of costly demand charges. The result is a simple payback period for the customer of less than four years. This is before the possible consideration of any form of government rebate or credit.

It is clear that the Company is off to an outstanding start of its third quarter. During the third quarter last year, Tecogen reported a positive net income for the first time in its history. The Company has been able to repeat that feat in the two subsequent quarters.

Tecogen’s second quarter results, for the period ended June 30, 2017, will be announced on Monday, August 14, 2017. They are certainly numbers to look forward to, as this will be the first quarter in which the results of the recently acquired American DG Energy (ADGE) will be consolidated with Tecogen’s.

While second quarter results will only include roughly half of ADGE’s quarterly results, as the merger was only completed mid-May 2017, they should point to the significant value that American DG provides to Tecogen. Recommendation BUY.