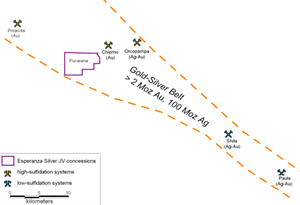 The Pucarana project is located in a productive gold-silver district in south-central Peru. It lies between the Chipmo and Poracota mines, which combined, produced 360,000 ounces of gold and 131,000 ounces of silver in 2010.

Esperanza Resources (EPZ – $1.03) notified Estrella Gold (EST: TSX) that it has met its stage 1 obligations, earning a 51% interest in the Pucarana Gold Project in Peru. Under the joint venture agreement between the two Companies, Esperanza had to expend at least $200,000 within the first year after receiving the drill permit, in order to obtain a 51% share in the project.

Earlier this year, Esperanza drilled 10 holes totaling about 2,500 metres on Pucarana. Unfortunately, only low-grade mineralization was encountered in vein structures.

The Pucarana property is located in the Arequipa region of southern Peru and consists of two concessions, totaling 1,889 hectares. It’s situated between the high-grade underground Poracota and Chipmo mines, both operated by Buenaventura (BVN: NYSE). These two mines together produced 360,000 ounces of gold and 131,000 ounces of silver in 2010, indicating that the district contains very significant potential for additional mineralization.

Esperanza could earn an additional 9% interest in Pucarana if it decides to continue making expenditures on the property. However, this is an unlikely scenario as the Company indicated that it doesn’t anticipate to continue drilling after the first drill results came back from the lab. The joint-venture partners are evaluating all options for the property.

Letter of Intent with Citation Resources

Esperanza also signed a Letter of Intent with Citation Resources (CTT) this week, in which Citation can acquire Esperanza’s 100% interest in the Biricu property in Morelos State, Mexico. According to the terms of the agreement Citation will be required to complete exploration expenditures of $4,000,000 within four years, including $250,000 in the first year. Esperanza would also receive a payment of $10 per ounce of defined gold resource at the time of a feasibility and a 2% net smelter return royalty.

The Biricu concession comprises more than 38,000 hectares of highly prospectable ground and is located in the direct on-strike extension of five skarn deposits in the Guerrero gold belt. These five deposits, El Limon-Los Guajes (owned by Torex Gold Resources Inc), Ana Paula (owned by Newstrike Capital Inc), Bermejal, Los Filos and Nukay (owned by Goldcorp Inc) contain more than 15 million ounces of gold. The first two deposits are currently in production, and the fourth and fifth are entering feasibility studies.

This is a good deal for Esperanza as the Company didn’t have any immediate plans for Biricu. The way I see it, there are two possible outcomes.

If there is a large enough quantity of gold at Biricu, Citation will make the necessary expenditures in order to earn the 100% interest in the property. In return, Esperanza will receive:

If Citation doesn’t find enough gold to proceed with explorations, the property will return to Esperanza with x amount of work conducted on it at no expense for Esperanza.

Both announcements indicate that Esperanza manages its portfolio of properties wisely.

The Company hasn’t announced what it intends to do next with Pucarana, but I suspect there’s a plan, otherwise it wouldn’t have held on to the property. And as for Biricu, we’ll just have to wait and see what exploration plans Citation comes up with and what the results are of those efforts.