News » My Visit to the International Precious Metals & Commodities Show

My Visit to the International Precious Metals & Commodities Show 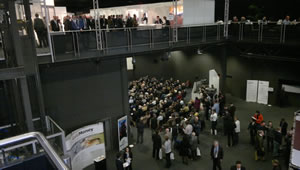 On November 4th and 5th, I attended the International Precious Metals & Commodities Show in Munich, Germany, which is the largest annual European investor show for metals and mining companies.

Roughly 2,000 visitors strolled along the 130 booths from various mining companies, vendors and publishers. The general atmosphere at the show was good, but judging from the many people buying physical gold and silver coins or bars, you could tell they were uncertain about the future.

Quite a few visitors also paused at the NSGold Corp (NSX – $0.45) booth to take a closer look at the core samples with visible gold and silver the Company brought along. Only very few companies took this initiative, and it paid off as it triggered peoples curiosity.

By the way, NSGold was recommended this week by myronswinningjuniors.com, an interesting website concentrating on junior mining stocks. The author gave two key reasons for his purchase: Near term gold production in Nova Scotia and the upcoming spin-out of the Mexican silver assets into a new company called NSX Silver.

Next to NSGold, I spoke with a few other very interesting mining companies, which I’ll introduce in the coming weeks on Smallcaps.us.