Following the news of several property deals arranged earlier this month, Globex Mining Enterprises Inc. (CA: GMX – $0.69 & US: GLBXF – $0.52 & GER: G1MN – €0.45) has continued to set the pace with a high level of activity. This is to be expected in a resource bull market. For a player with a suite of high quality exploration projects available it is a seller’s market indeed. This week, Globex announced additional successful transactions and updated financial gains from previously arranged deals.

Two transactions were reported to vend certain property interests in the Province of Quebec. In the first, several property holdings located near the town of Val D’Or were included in a major cash sale agreement. Globex had assembled a cluster of claims in close proximity to the Sigma and Lamaque gold mines. These were held as the Sigma East and Sigma 2 properties.

Globex originally acquired all of the property cells involved in this transaction through staking. The Sigma East properties were staked in 2015 and the Sigma 2 area, more recently in October 2019. Globex recognized the potential value of these land packages due to recent exploration and development activity in the region. Also, historical exploration records indicate that erratic gold mineralization had been encountered in previous drilling work completed within the claim groups. 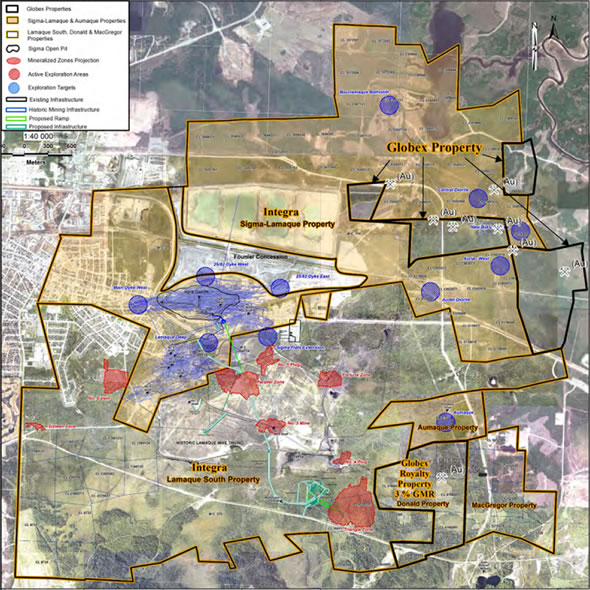 Sixteen property cell fractions of Sigma East were included in this deal, along with the Sigma 2 property. A subsidiary of Eldorado Gold Corporation [TSX – ELD], agreed to purchase these assets to consolidate ownership of a mine development. Eldorado operates the nearby Lamaque gold mine, where commercial production commenced just over a year ago. Under the terms of the transaction, Globex received a cash payment of $1,606,000 from Eldorado.

In the second deal reported this week, Globex vended a portion of its property interests within the Windfall Lake district to Osisko Mining Inc. The property claims comprise the Windfall East project, only recently acquired by Globex through staking in March 2019. This deal followed a natural progression since the decision to acquire the property was in fact motivated by the successful exploration activity in the area reported earlier by Osisko. Similar to the transaction with Eldorado, the ability to recognize open property interests proximal to a high profile discovery area enabled Globex to capture ownership of a land position that could be sold shortly thereafter.

A total of six cells were involved in the deal, including one that is on strike and to the east of Osisko’s Windfall Lake project. Three other cells are offset from the main structure to the southeast. The remaining two cells involved in the deal are situated to the southwest of the Black Dog deposit area. Globex continues to hold ownership of another cluster of property cells in the district related to its Windfall Property which is not part of this transaction.

Osisko paid $100,000 in cash to secure 100% ownership of these holdings. Globex continues to retain a 2% Gross Metal Royalty on the Windfall East property cells in the event that any subsequent metals production may be achieved in the future.

Globex furthermore received a payment in shares of Nickel and Technologies Ltd. [CSE – NICO] as part of a previously arranged royalty deal for the Marbridge South nickel property. A total of 53,846 shares with a book value of $38,000 were transferred to Globex. This may be considered a bonus payment for a property interest held through a royalty partner. The principal transaction involved royalty partner Quebec Precious Metals, in a deal vending ownership of the property to Nickel and Technologies Ltd.

In addition, the Company reported that its existing royalty leverage through the Mid-Tennessee Mines project operated by Nyrstar NV is increasing. The spot price for zinc has now risen back above the price level of $1.10 per pound. As per the original transaction terms, the royalty is automatically increased to 1.4%, instead of 1%, on mine production. The recurring income from this one project has already amounted to a very significant amount over the last several years. Globex is now the beneficiary of this higher royalty leverage while the zinc price holds in the current range or higher.

Securing ownership of property interests in proximity to exciting exploration districts has been a successful strategy for Globex on numerous occasions in the past. Globex is able to respond quickly when high-profile exploration results and mineral discoveries are presented, in order to lock up available land positions nearby through staking. This creates a low cost of entry to build leverage to evolving discovery stories.

Property holdings that had been overlooked often become highly sought after as important parcels to consolidate larger projects. Globex is then able to achieve a capital gain through these transactions at premium valuations. Further potential upside may also be furnished through retained royalty interests.

All of the transactions reported this week were enabled by this strategy. In total, the cash and share payments generated by these deals amounted to more than $1,740,000. This additional funding boosted the working capital position for Globex to approximately $10 million. And with the increased royalty revenue stream from Nyrstar, now that zinc has risen above $1.10 per pound, the financial position for Globex will be further strengthened.

Globex is one of the most effective project generators in the junior mining sector, arranging deals that create shareholder value. Just this month, the Company has reported numerous successful property transactions. As a result of all these deals, Globex’s stock reached a new high of 77 cents this week, which is a double compared with just 3 months ago.

Globex now controls a suite of 188 resource properties worldwide. As this resource bull market gains momentum, the pipeline of attractive property interests will be fully primed to enable the Company to complete additional transactions. Meanwhile, the strong working capital position ensures that Globex is fully funded to continue with this successful strategy for a long time to come. Smallcaps Recommendation: BUY.