Moreover, if EnWave didn’t have to book a one-time impairment charge of $865,000 due to the ending of the collaboration agreement with Sutro Biopharma, the Company would have achieved an awesome net profit of $761,000 in the third quarter. 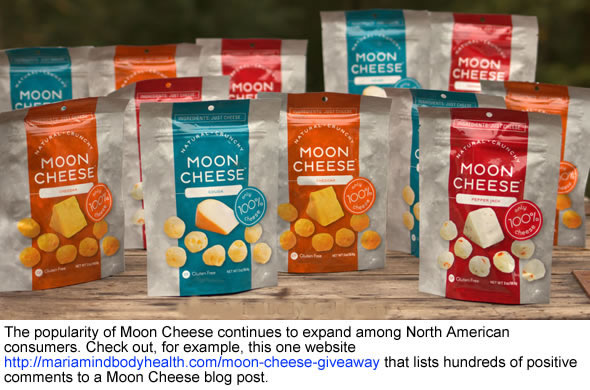 The popularity of Moon Cheese continues to expand among Noth American consumers. Check our, for example, this one website http://mariamindbodyhealth.com/moon-cheese-giveaway that list hundreds of positive comments to a Moon Cheese blog post.

On April 30, 2018, EnWave and Tilray, a large, well-established Canadian medical cannabis licensed producer, expanded their royalty-bearing license agreement to include rights for processing legalized cannabis in the country of Portugal. In addition, Tilray submitted a third purchase order for a 60kW REV unit to be installed at its new Portugal medical cannabis production facility.

Also in the cannabis space, EnWave entered into a Technology Evaluation and License Option Agreement (TELOA) with one of Canada’s largest licensed cannabis producers (LP) to enable the LP to evaluate EnWave’s REV technology for rapid decontamination and dehydration of cannabis. The TELOA grants the LP the exclusive rights to license REV for processing cannabis in a non-specified country in Europe.

Two more TELOAs were signed during the third quarter. The first one with Fresh Business Consulting, a diversified investment and consulting firm headquartered in Spain, to develop several innovative food products using EnWave’s technology in Peru. And the second one with a major Australian dairy company to evaluate the REV technology for the development of several dehydrated, premium dairy ingredients. Both companies have rented a small scale REV machine.

The increase in royalties is very important. First of all, it indicates that a growing number of EnWave’s clients are selling larger quantities of REV dried products. Moreover, the rise is also important because this revenue go straight to the bottom line. Royalties are expected to continue to go up in 2018 and beyond as new license agreements are signed and additional REV machinery comes online.

A couple of items stand out on the balance sheet. First, on June 30, 2018 the cash and cash equivalents number was $7.08 million compared to $2.21 million on June 30, 2017 an increase of $4.88 million. The rise is primarily due to the equity financing of almost $9 million in November 2017. In February 2018, the Company spent $2.28 million to acquire the 49% non-controlling interest in NutraDried. The Company had net cash outflows from operating activities of $74,000 for the first three quarters of 2018.

In other news, Mr. Brent Charleton was promoted to President and Chief Executive Officer of EnWave. Since joining EnWave in 2010, he has been promoted on six separate occasions. During that period he has been a major contributor to the Company’s commercialization success and has been leading the proactive licensing strategy and deployment of EnWave’s REV technology. Dr. Tim Durance, the former CEO, will be leaving the Company to pursue other interests.

We will soon conduct an update interview with Brent Charleton. In case you have a question for the Company’s brand new CEO, don’t hesitate to let us know. We will consider including it in our interview.

While EnWave continues to increase its worldwide presence in the food, pharmaceutical, and rapidly growing legalized cannabis sectors, NutraDried is performing exceptionally well with its crunchy cheese snacks.

In early fall, NutraDried’s production capacity of Moon Cheese will more than double thanks to the installation of a second 100kW nutraREV machine and a 10kW REV machine. This is a very necessary investment, as the current machine is running at full capacity.

Thanks to NutraDried’s solid performance, EnWave is now cash flow positive and would also have been net profitable if it hadn’t been for the one-time impairment charge. The stock continues to trade well below its actual value. We expect this to change in the near future. Recommendation: BUY.