The emergence of the Covid-19 pandemic created a systemic shock that is affecting just about every aspect of the world economy. Many businesses have been forced to almost curtail operations. Since the duration of this crisis is unknown, the ultimate financial outcome is also uncertain.

For investors this uncertainty is contributing to a worldwide stock market selloff. There is downward pressure on every asset class. Many companies have opted to issue updates detailing the status of their operations along with additional guidance regarding potential impacts as the situation evolves.

In the midst of a very ambitious exploration campaign currently underway at several properties, Renforth Resources Inc. (CA:RFR – $0.03 & US:RFHRF – $0.03 & GER:9RR – €0.01) has presented a promising status update this week. As a junior explorer, focused on fieldwork in northern Quebec and Ontario, the Company is fortunate that the corona virus has not directly affected its operations at the present time. Management is monitoring the situation and maintaining a prudent level of caution to ensure that none of the staff or contractors operating on behalf of the Company are exposed to any additional risks.

The New Alger property remains the focus for exploration activity. Renforth reports that it has now completed the second round of diamond drilling work at the project. Four drill holes were completed around the emerging Discovery Veins deposit target. The drilling program amounted to a total of 2052 meters of drill core and the full allotment that was planned.

Assay results from that first drill hole were presented last month. These results included a section of 8.75 g/t gold across a 0.75m interval. Several other gold-bearing intervals were also encountered from this drill hole.

Each of the other drill holes encountered attractive alteration zones and samples have been submitted for assay. One of the drill holes was aborted after a short distance and then re-oriented to avoid blocky rock conditions. The drilling was subsequently completed in the altered alignment down to the full target depth of more than 500m.

The presence of altered volcanics and sedimentary rock units further to depth were confirmed in this drilling work. In addition, similar intervals of quartz veining were encountered in these drill holes. Higher grade gold has been encountered within these veins in previous work, along with the contact zones and alteration halos in proximity to the veins. Renforth is therefore very excited for the pending assay results from the remaining drill core sections.

Renforth is now looking ahead to plan the next round of work at New Alger. Additional fieldwork is scheduled around the Discovery Vein target area. Surface stripping has exposed the system up to 500m along strike. The Company plans to continue sampling work to find out if the strike can be further extended. In addition, a 100 to 200 tonnes bulk sample will be blasted on surface at the Discovery Veins, in an area that gives an average grade of 1 g/t Au. This work will continue through the Spring and is fully funded.

Renforth’s winter 2020 drill program at New Alger was concluded with 2052m drilled in 4 holes, which are highlighted in the image above with the two ellipses.

Lots of Activity Planned to Advance Other Exploration Prospects

The Parbec Property has already delivered promising results and remains an important project for further discovery potential. Renforth is planning to commence Metallic Screen work to test samples previously extracted for coarse gold content. This follows the success that the Company achieved with a similar testing regime completed with the New Alger sample material. Further details on this work will be reported shortly.

Another promising Quebec project, the Malartic West property will also see further work completed later this year. The copper-gold showing that was encountered during fieldwork in 2019 is considered a very appealing target for further investigation. Similar to New Alger, resource zones at Malartic West are also hosted within Pontiac Sediments associated with the Cadillac Break. A number of prolific gold and copper mines have been established in the district. Renforth will issue further updates on the status of this work commitment as the planning is completed later this year.

Activity by the Company has focused on the Quebec assets in recent years. However, the Nixon-Bartleman property in Northern Ontario is also slated for fieldwork later this Spring. Previous operators of the project had exposed gold alteration in trenching along a 200m corridor. Subsequent fieldwork completed by Renforth in 2014 extended this mineralized strike length to 450 meters. Sample results included an interval of 0.3m with an average grade of 22.1 g/t gold. This represents a large and appealing target that merits further investigation. Additional fieldwork is planned for this area in the early summer months. Renforth will issue an update as the planning is completed. 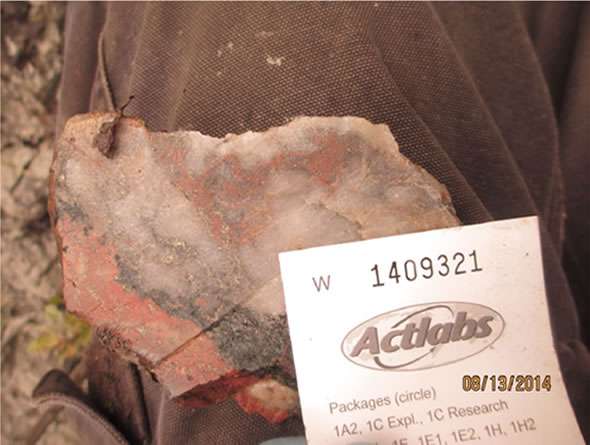 The Nixon-Bartleman Property hosts classic structurally controlled gold mineralization, the full extent of which has been largely ignored by previous owners.

Shareholders remain confident based on this update. Renforth continues operations on a ‘business as usual’ posture. Given the major disruptions that are occurring in many other sectors at the current time, this is to be construed as good news. The Company is maintaining an appropriate response to monitor the situation regarding the Corona virus and avoid possible exposure among its personnel. However at this time the threat is not expected to impair its ongoing exploration activity.

The imminent release of further assay results from New Alger is a speculative tail wind for the stock. Confirmation that drilling work penetrated the targeted rock structures supports the potential that additional high grade gold may be reported shortly. This in turn provides a potential catalyst for a move higher in the share value for the Company.

Renforth is not sitting idle while the laboratory assay process continues. The Company has reviewed the other projects in the portfolio and is maintaining positive momentum. Additional work is in planning for each of the other properties. This focus to remain among the most active exploration stories in Canada, even during the uncertainty of the Corona virus outbreak, is a defining characteristic of the Company. Renforth is committed to continue with exploration programs and remains an excellent candidate to deliver discovery success. Smallcaps Recommendation: BUY.