There has been a growing awareness of the importance of maintaining a healthy environment and this movement has also led to some hostility and resistance towards mining activity. While it is true that some mines have created damaging consequences for the environment, society as we know it today could not function without mining. The reality is that mining companies have become much better stewards of the environment and are now held to account such that any operating mines must be restored to the natural condition of the landscape once their productive activity winds down.

But what is to come from the legacy of toxic waste and tailings that remain from historic mines in many parts of the world prior to this wave of responsible environmental mining practices? Contaminants may be found in the soil and water as a reminder of past mining that may have been ongoing decades ago.

Canadian-based BacTech Environmental Corp (CA: BAC – $0.02 & US: BCCEF – $0.02 & GER: 0BT1 – €0.01) owns a technology that holds promise to clean up some of the contaminants commonly found in tailings from current and past mining activity. The Company has the rights to a commercially=proven processing circuit that uses active bacterial agents to break down minerals and rapidly oxidize rock, enabling a more efficient and complete recovery process. The primary objective is to recover valuable metals leftover from previous mine processing, but the benefits also include removal of some of the toxic waste materials, such as arsenic, that contribute to contamination of the local environment. Call it a win-win arrangement. 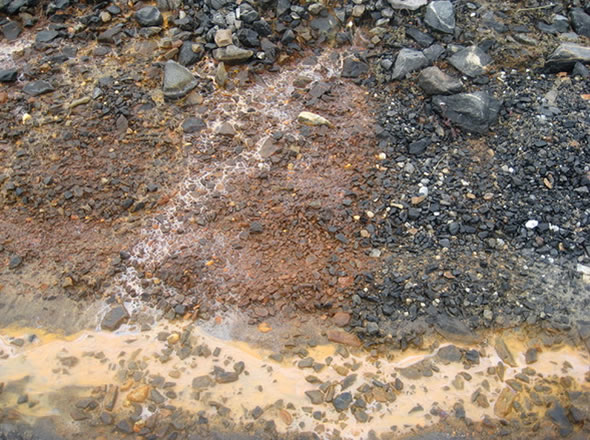 Acid and arsenic being released from the Snow Lake stockpile

Potential for Successful Processing and Remediation of Tailings at Snow Lake

This week, BacTech signed a Letter of Intent with GMR Inc., as a technology partner contributing towards the development of a working metallurgical solution for the treatment of 70 year old concentrate near Snow Lake, Manitoba. A large stockpile of arsenopyrite concentrates were disposed at surface from many years of mining activity in the area, and this stockpile is a concern due to the presence of arsenic. However, there is also a resource of gold and silver remaining in the tailings with the potential for a profitable recovery operation if an efficient processing circuit can be established. 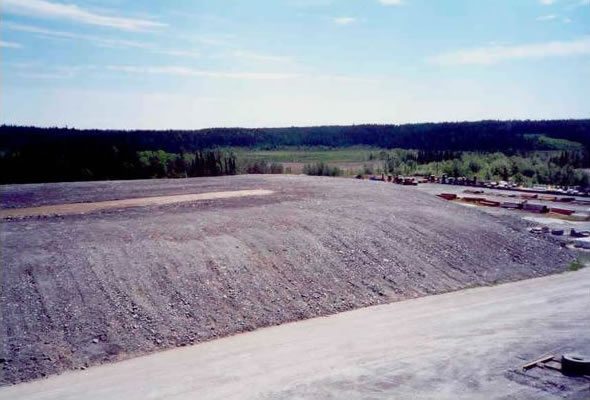 BacTech is no stranger to this project, having investigated using their proprietary processing circuit in 2011. The Company completed a drilling program at the stockpile and the assay results were used to establish a compliant resource for the remnant gold and silver in the tailings. From this work it was established that the concentrate stockpile contains an estimated 264,596 tonnes of Measured Resources grading 9.76 g/t of gold and 2.17 g/t of silver. In addition, Indicated Resource estimates include 9,300 tonnes grading 9.2 g/t Au and 2.15 g/t Ag and an Inferred Mineral resource of 28,000 tonnes of 7.0 g/t Au and 2.4 g/t Ag.

Lab testing indicated that 95% of the gold and more than 88% of the silver could be recovered through subsequent processing. However, at that time there were economic impairments that could not be overcome due to the deficiency of iron in the concentrate. Adding a ferrous iron to the process increased costs per ounce and, as a result, the ferric arsenate residual material could not be stabilized for recovery. As a result, BacTech withdrew from the project.

Metallurgical Solution May Contribute Towards Removal of Historic Arsenic Contamination

With the advance of metallurgical processing technology, potentially beneficial processes may be brought to bear at Snow Lake that restores the project to economic viability. GMR has also secured the participation of Dundee Sustainable Technologies as a technology partner, to employ a vitrification process that is expected to mediate the iron deficiency and enable separation of the arsenic from the stockpile, allowing it to be safely disposed.

As part of the agreement, BacTech has provided data from its previous work at Snow Lake including results from testing of the processing circuit using sample material from the stockpile. The Company will also license its bioleaching process to the partnership and contribute towards the development of an economic processing solution.

BacTech received an advanced payment of $20,000 in cash as part of this agreement, and will also stand to earn a 3% undivided interest on any income earned from the subsequent operation of a successful processing solution at the project.

There are many positive considerations involved in this partnership that could become extremely rewarding for BacTech shareholders as this initiative advances. Ideally, the establishment of a working processing loop that removes arsenic contamination from a former mine site is a win for the entire mining sector, and for the local community around Snow Lake that may have been affected by this toxin. In addition, the endeavor is underway without cost to taxpayers, which also represents a very important consideration.

However, if the process is successfully developed to recover a significant amount of gold and silver from this stockpile and generates a profit, then BacTech will also be the recipient of a cash payment stream from this operation that goes straight to the bottom line.

There are reasons to be optimistic for this outcome. Since the concentrates are stockpiled at surface and already processed through preliminary crushing and grinding of the rock, much of the risk and cost structure related to mining and processing will not be an issue for this project. In addition, the high grade of gold and silver in the concentrates suggests a valuable output of metal will be produced if the circuit operates in line with previous lab testing.

More importantly, with a successful and profitable resolution to the legacy of toxic mine concentrates from Snow Lake demonstrated, BacTech may anticipate an enthusiastic invitation to participate in many other such projects in the future to address remediation of historic mine waste dumps located worldwide. Bioleaching is also an acceptable technology that appeals to the environmentally conscious movement that is often found in opposition to mining activity. Therefore, the process may be more in demand once it has been proven to address contamination issues and also generate an operating profit. SmallCaps Recommendation: BUY.