Gold Keeps on Coming for Renforth Resources and Its Parbec Project

It seems that nary a week goes by without at least one significant news release issued by Renforth Resources Inc. (CA:RFR – $0.10 & US:RFHRF – $0.09 & GER:9RR – €0.06). The active winter drilling season at the Parbec and Surimeau projects has led to an enormous backlog of drill core samples submitted for assaying. Renforth is receiving data in small batches and reporting this information on a regular basis. This week the Company issued another update of drill core assays. Data for four complete drill hole samples was reported, including PAR-20-115, 122, 123 and 126.

As has been the case in every previous update for Parbec, Renforth achieved meaningful gold values in all of the drill holes. The best result of this batch was a 3.7m section bearing an average of 1.65g/t gold in PAR-20-115. A similar interval of 3.85m was reported in PAR-20-123 with an average of 1.12 g/t gold.

Another commonly observed attribute to the Parbec exploration, multiple mineralized intervals were again encountered in all four the drill holes. Higher grade gold mineralization was reported within more narrow sections, such as the interval of 0.45m that carried 5.2g/t gold in PAR-20-126. In a 0.5m section of PAR-20-123 a high grade of more than 7g/t gold was encountered. This was also notable as it was confirmation drilling for a result reported from the 1940s.

In all, the assay results from these drill holes represent another step forward to confirm additional gold values that will contribute towards a much greater gold endowment defined at Parbec. When the final drill core assay is in hand the focus shifts to completing an updated resource estimate. Assay data for core samples from a total of 33 drill holes remains outstanding.

This latest batch of successful gold intercepts contributes to the definition of a more complete deposit. Areas of the property that were outside of the previously established gold deposit are being investigated. These included gap zones where the drill density was not sufficient to assume gold resource zones for the deposit and also historic drill holes where gold values were previously encountered but could not be included in the resource estimate until further confirmation was presented to validate these sections. Deeper gold zones below the previous limits of the deposit area have also been achieved.

The thorough approach to exploration has delivered some exciting additions to the overall deposit. Even some of the more narrow bands of gold mineralization have been encountered in step out drilling. These zones now amount to a much more significant component for the total gold resources of the project. The confirmation of gold mineralization in newly discovered areas of the deposit also improves the prospective economics for the project. Sections that were formerly considered waste rock may now be upgraded to valuable resources. The discovery of unexpected gold mineralization encountered very close to surface at the top of some of the drill holes is also encouraging.

A more complete database is now being assembled for the various types of gold settings that comprise the Parbec deposit. Like individual sections of a layer cake, the documented gold zones will count as slices of a much larger deposit. This can be represented in three dimensions and studied as part of an optimized mining plan. Those sections and layers that are situated within the conceptual open pit shell contribute more appealing economic clout for the project. And so each new interval reported is important for creating greater shareholder value.

Located adjacent to the largest open pit gold mine in Canada, the Parbec gold deposit is maturing into a highly appealing acquisition target for many of the mid-size and senior mining companies active in the district. The winter exploration program has already achieved some of the strategic objectives. New gold zones were reported, and wider mineralized intercepts along with higher grade sections have been presented.

Successful confirmation of historic drilling work is also part of the plan for the recent exploration. Roughly 13,000m of previous drilling work was excluded from the last resource update. As further positive validation of these historic drill holes is achieved, Renforth will be able to add this large chunk of attractive data to the calculation of the overall gold deposit. A lot of attention will be focused on the pending update for the estimated gold resources of the project. With a significant number of drill core samples still untested, the potential for additional meaningful discovery surprises remains another positive factor. 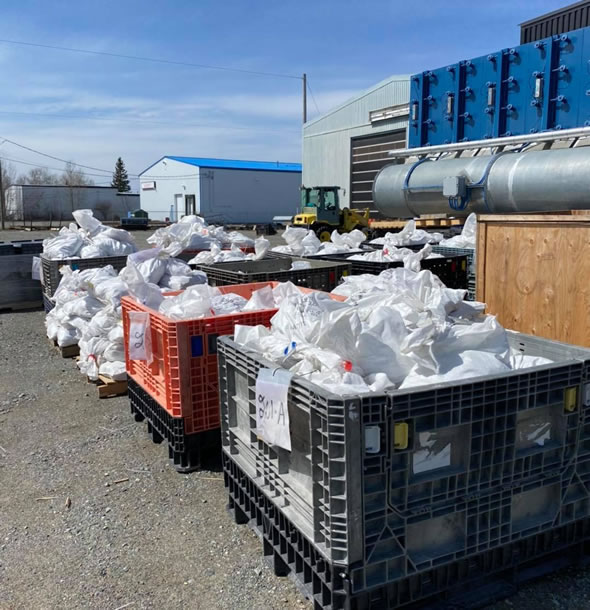 Parbec drill samples sitting in the yard at the lab means that there’s lots of data still to come.

The speculative aspect for Renforth is further enhanced as the nearby Surimeau project is already generating some surprises on the exploration front. And the recently reported additional property holdings are another element to build the premium on this story. So even as shareholders look forward to additional assay results from Parbec, there is the promise of further exploration success awaiting at Surimeau.

As one of the most ambitious junior exploration stories active in Canada, Renforth has a legitimate one-two punch in play with Parbec and Surimeau. The large backlog of outstanding drill core assays from both projects will provide continuous news flow in the weeks ahead. It appears that a hot summer indeed is shaping up for Renforth shareholders. Smallcaps Recommendation: BUY.