In what amounts to a breakthrough year, shares of Globex Mining Enterprises Inc. (CA: GMX – $1.08 & US: GLBXF – $0.85 & GER: G1MN – €0.72) have consolidated somewhat this month after a significant surge in price. The rise in shareholder value is no surprise as in recent months Globex has reported deals that resulted in significant capital gains as some of these holdings were sold at premium valuations. However a balanced strategy also requires effective acquisitions to maintain an inventory of high quality properties. To be sure, the lavish suite of property interests currently held by Globex includes many projects that were acquired earlier in the cycle for extreme bargain considerations. This tends to occur at the lows of bear markets. Occasionally, a solid acquisition may become available even during this phase of bull market sentiment.

It helps that Globex is focused on Quebec as its primary area of interest. The jurisdiction is famous for exceptional exploration potential and Globex may be considered to have ‘home field’ advantage. Finding the right properties to acquire and knowing the correct value price to pay have served management well for many years.

This week, Globex reported yet another transaction and this time it was an asset acquisition. The Company announced that it had purchased 100% ownership in the Rouyn Merger gold property. Located in Quebec within the prolific Cadillac Break structural corridor, the property comprises an area of more than 1500 hectares. Globex issued payment of 183,000 common shares to IAMGOLD Corporation [IMG] to secure ownership. IAMGOLD also retained a 1% NSR on the property as part of this deal.

Several historical gold zones have been identified by previous operators of the Rouyn Merger property area. These include the Rouyn Merger, O’Neil-Thompson and East O’Neil gold occurrences. These zones are located in close proximity to the Cadillac Break structure. Gold veins were encountered at the Rouyn Merger deposit through shallow drilling efforts completed in the 1930s. Limited mining occurred in the late 1940s, with an estimated production of 4000 ounces of gold. Gold resource estimates were presented by various operators of the property, none of which may be relied up under current reporting standards. The historic activity however serves to demonstrate the exploration potential. 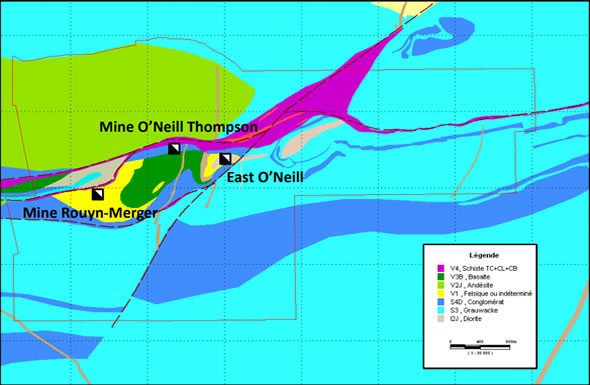 Similarly, the O’Neil-Thompson deposit was outlined in the 1930s with a limited production history documented in 1936. Speculative gold resource estimates were also outlined for the nearby East O’Neil deposit although no previous mining activity is known.

Prior to IAMGOLD gaining ownership, modern exploration efforts resumed at the property in 2015-16 under the guidance of Kinross Gold Corporation [K]. Several rounds of drilling tested historical targets and achieved some notable gold intercepts. An attractive result was a section of 16 g/t gold across a one meter interval followed by 0.5 metres of 4.19 g/t.

The district surrounding the Cadillac Break is known for high-grade, structurally hosted gold deposits. Kinross had been exploring for the potential discovery of a near-surface, bulk tonnage gold deposit. The Canadian Malartic Mine, currently the largest open-pit gold mine in Canada, was developed using that strategy. High grade, narrow vein structures were not what Kinross was looking for. Despite promising early results the program did not advance further.

Rouyn Merger was subsequently returned to IAMGOLD per the IAMGold/Kinross option agreement terms. However it was considered a non-core asset for IAMGOLD as the focus shifted to other projects. Globex was able to make the right offer at the right time to arrange this transaction.

This attractive property acquisition builds leverage to a high profile mining district that is famous for gold production in Quebec. Globex holds a great many other property interests in the Abitibi Greenstone Belt. The Company has also completed multiple transactions to vend interests in other properties in this district. It represents the ideal region for a transaction specialist like Globex to advance its business model.

Prior to completing this acquisition, Globex compiled all available historical exploration data for the property. A 3D model was developed to provide the basis of future exploration potential. Several shallow, high-priority drilling targets were identified as part of this process. Appealing targets were also outlined at deeper elevations. Globex plans to complete a high resolution Novatem aeromagnetic survey for the property later this month. This data may then be included within the geological model to gain further insight for target definition.

With the Rouyn Merger gold property, Globex appears to have identified another winner. Even given the elevated share price so far this year, the cash value for this acquisition is only in the range of $200,000. This may be seen as yet another bargain as work commences to unlock additional discovery potential. Globex plans to undertake exploration to outline high grade vein-hosted gold deposits at several high potential areas of the Rouyn Merger property. They are in the right district to do so and have secured a very solid prospect for the right price. Smallcaps Recommendation: BUY.