The Mid Tennessee Mines, owned and operated by Nyrstar NV (OTC – NYRSY), were shut down in 2015 due to low zinc prices. Because the metal price has significantly recovered since, Nyrstar restarted mining and processing operations in May 2017.

The royalty of July was received based upon 2,373.4 tonnes of zinc production at an average zinc price of US$1.26 per pound. Note however that the current zinc price is already up to US$1.40 per pound and that the mine and mill at Mid Tennessee are still in ramp up phase. The objective of Nyrstar is to produce 50,000 tonnes of zinc concentrate per year, or 4,166.7 tonnes per month by November 2017. Consequently, Globex’ monthly royalty payment is expected to go up significantly by year-end. 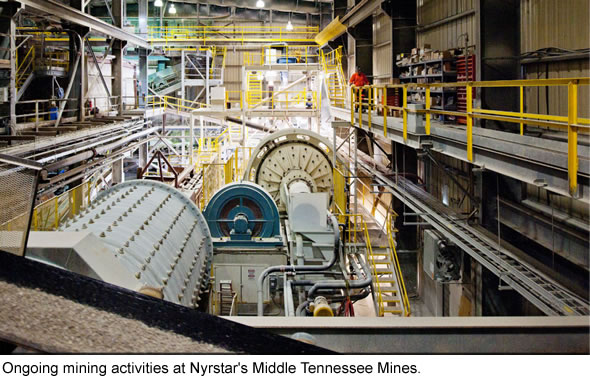 In other news, Enforcer Gold (TSX-V: VEIN), which has optioned Globex’ Montalembert Gold Property, is rapidly advancing with its 2017 exploration program.

So far, the company has completed 490 m of channel sampling over new and existing trenched exposures including the No. 3 Vein located ~175 m south and along strike of the No. 2 Vein (see map below). In addition, 260 rock samples have been collected from mapping and prospecting over a 1.5 km x 1.5 km area that encompasses the Galena and No. 2 veins. Partially received results from these rock samples have prompted follow-up work in several areas.

Moreover, Enforcer has conducted over 45 line-kilometres of induced polarization (“IP”) survey. The company is currently reviewing the 3D modelling and interpretation from the ground IP survey. 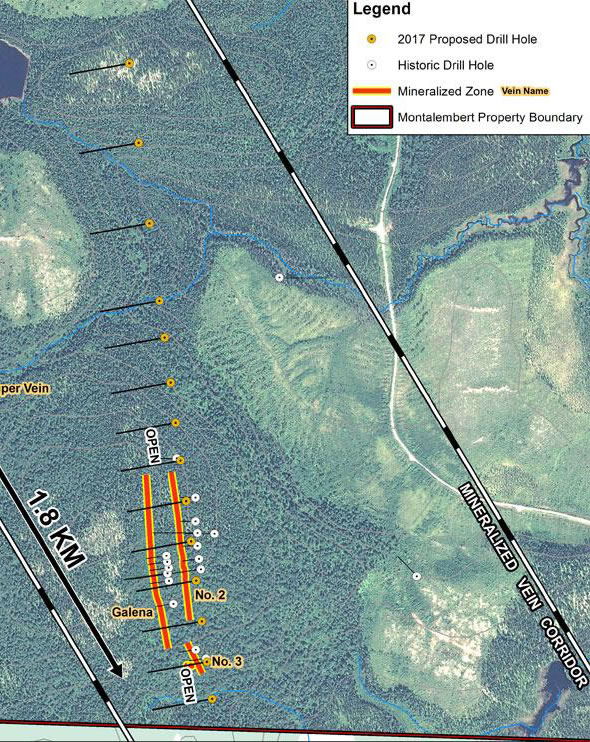 Finally, Enforcer has drilled 20 large diameter HQ drill holes totalling 2,227 m. However, due to the busy summer exploration season the assay labs are jammed to capacity. Consequently, the exploration team is waiting for assay results for 18 of the 20 holes drilled to date. Because these results are key to further drill hole planning, the team has elected to take a short pause in drilling to allow for assay results to be received.

One result from drilling that Enforcer did announce was that it noted visible gold in drill hole MDD17006, which tested the No. 2 vein. It intersected sheared basalt over a 2.3 m downhole core length (true width currently unknown) with visible gold noted within a grey quartz veinlet at 28 m downhole, or ~20 m vertical depth.

Enforcer can earn a 100% interest in the property over a 4 year period by paying Globex $2.6 million, issuing 8.5 million shares of common stock and by undertaking $15 million in work. Globex retains a 3.5% Gross Metal Royalty on all production from the property with a royalty of 6% on the first 150,000 oz of gold production.

Enforcer is using the time that the lab needs to process the drill core to deploy several geological and prospecting teams over the 7300-hectare Montalembert project area. One team will focus on multiple high-priority geophysical anomalies interpreted from the company’s high-resolution aeromagnetic VLF-EM survey flown in March as well as from historical geophysical surveys by previous exploration companies. Undoubtedly Enforcer will continue to happily surprise us in the coming weeks and months with some exciting results.

At full capacity, Globex anticipates receiving royalty payments from Nyrstar of over $1.5 million per year. This is a very attractive financing method to advance Globex’ other projects without any shareholder dilution. Recommendation BUY.