Electric vehicles are becoming more widely adopted, and the sales growth is expected to continue. The increasing demand may create supply issues for critical elements currently used in the manufacture of batteries to power them. Cobalt is one of many critical elements that represent a potential bottleneck restraining production growth. It should be noted that China is already consuming a large percentage of worldwide output for the energy metals: lithium, graphite and cobalt. Research has been underway for some time to displace cobalt from the manufacturing process.

A new frontier for battery technology development aspires to achieve superior performance using other elements. Tesla is considering a new battery design that will incorporate high purity manganese to replace cobalt and resolve one potential supply issue. However this would then significantly increase demand for manganese if the technology is perfected. There is no current source of manganese mine production within North America and all must be imported.

This exciting technology development should be of interest to Globex Mining Enterprises Inc. (CA: GMX – $0.76 & US: GLBXF – $0.60 & GER: G1MN – €0.51) shareholders. The Company already retains a 1% GMR on the Houlton-Woodstock New Brunswick manganese project and 1.35 million Manganese X shares, and 3 million shares in another company with a 2% GMR. 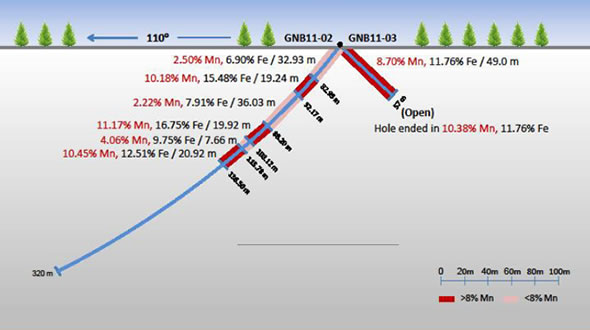 On the Woodstock property considerable widths of iron and manganese bearing material were encountered during a previous drill program.

However, Globex has opted to increase its leverage to the potential upside for manganese demand. This week, Globex announced the acquisition of another advanced manganese prospect. The Company has secured ownership of a block of now 24 claims encompassing the Glassville South manganese zone in New Brunswick.

The project area hosts a historic manganese resource that was originally defined in 1956. A program of seven drill holes targeting a geophysical anomaly had encountered attractive grades of manganese near surface. This work led to a preliminary historical non Ni 43-101 resource of more than 450,000 tons bearing an average of 11% manganese plus 8.45% iron. While this resource may not be considered accurate under current reporting standards, it certainly does represent a compelling target for further exploration as a significant showing.

Globex has reviewed the technical data available for this prospect and believes that additional discovery potential exists in proximity to the currently outlined deposit zone. A drilling program could serve to confirm the previous encountered manganese zone. Drilling may also include exploration targets that could add to the overall deposit further along strike.

In addition, the setting for the Glassville South manganese zone is attractive given the conceptual footprint of the deposit area and the relatively shallow depth of the alteration. The economic potential for a mine development is therefore enhanced. Relatively low risk exploration activity could enable Globex to present an advanced manganese deposit. This in turn could provide the basis to increase shareholder value with through a future JV transaction for the project.

Meanwhile, work continues to advance the Houlton-Woodstock Manganese Project. Originally acquired by staking in 2011, Globex achieved a manganese discovery shortly thereafter with a successful drilling program. This in turn attracted Manganese X Energy Corp [TSXV – MN] to enter into an option deal with Globex to acquire the project in 2016. Under the terms of this transaction, Manganese X agreed to issue payments in cash and shares, along with exploration commitments to earn 100% ownership. Currently, Globex owns 1.3 million shares of Manganese X Energy, today worth well over $1 million.

Manganese X commenced exploration work immediately afterwards. The company reported additional success through a drilling program, highlighted by wide intervals with grades of 13-16% manganese oxide encountered. In May 2017, Manganese X embarked on further exploration, as well initiating metallurgical studies. Ongoing advancement of the manganese deposit improves the potential for development into a producing mine. A domestic source for manganese will become a higher priority if a technology breakthrough is achieved for the new manganese battery design in process by Tesla. This in turn could ultimately generate a significant royalty stream payable to Globex.

Globex received more positive news this week, as NSGold Corp [TSXV – NSX] reported an updated inferred mineral resource of 3,454,000 tonnes with an average diluted grade of 4.71 grams per tonne containing 523,000 ounces of gold (uncut 804,000 oz gold). In addition, NSGold announced that it wants to sell its Mooseland Gold Property, or the company as a whole.

This news caused a sharp increase in NSGold’s share price, which again is good news for Globex shareholders, as it owns 1,745,408 shares of NSX, today worth about $785,000. Moreover, Globex holds a 2% Gross Metal Royalty on any future production of Mooseland.

Next to closing lucrative royalty deals and outright selling properties, Globex also advances some of its holdings. As such, the Company commenced a five-hole drill program on its 100% owned Laguerre-Knutson-Raven River gold property in Ontario.

Once again, Globex management has recognized early stage potential for strategic elements and worked to build leverage for further upside. One should not underestimate the first-mover advantage achieved by the Company with this strategy. Globex has been able to secure ownership of attractive manganese prospects, achieving bargain-level acquisition costs.

Note that initial exploration work at the Houlton-Woodstock project advanced the property to enable a profitable transaction. This month Globex is proceeding with the same strategy by acquiring the attractive Glassville South manganese zone that may also be rapidly advanced to a higher profile prospect.

The priority to develop a domestic mine supply for manganese may gain momentum with further development progress for a manganese battery design. If so, the additional resource leverage through this property acquisition may become a very shrewd investment.

Globex is one of the most successful project generators in the mining sector with an extensive portfolio of property interests. The strategy to buy low and sell high remains effective even as a new bull market is gaining momentum. During the last several quarters the Company has achieved profitable transactions to vend certain interests with attractive gains. However, Globex also continues its strategy to acquire new assets and maintain a pipeline of prospects with full diversification to a variety of resources. This latest property acquisition is a demonstration of the capacity of management to respond quickly to a new trend and the potential to create shareholder value. Smallcaps Recommendation: BUY.