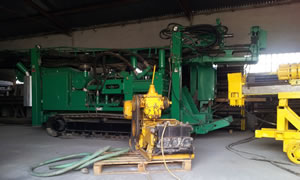 Part of the underground drill rig which is installed at Strieborna, 180 metres below surface.

Global Minerals (CTG – $0.38 & DFPN – €0.32) has commenced the first phase of an underground drilling campaign at its 100% owned Strieborná silver/copper property in Slovakia.

It will carry out underground drilling from level 6, approximately 180 metres below surface, and will target the Strieborná vein, which is a mineralized structure of 1.2 kilometres long, 600 metres deep with an average thickness of 3.4 metres. First assays are expected to be ready early next year. At the same time, another drill station is being excavated at Level 6 where a second drill rig will be installed shortly.

Roughly 35 holes, totaling 5,000 metres, are planned from these two platforms. The goal is to both upgrade Strieborná’s current resource estimate from the Inferred category to the Measured and Indicated categories and to expand the resource with step-out drilling to the Northeast of the vein.

Dewatering of the mine also continues unabated. When we visited the project a couple of weeks ago, the water was almost down to Level 7 (230 metres below surface), so it would be logical when it’s below that level by now. When access to the underground tunnel at Level 8 (280 metres below surface) is available, another drill rig will be installed there, from where an additional 5,000 metres, aimed at the Strieborná vein, will be drilled.

In total, 50-60 holes are planned, which is significant knowing that only about 12 holes were drilled at Strieborná during the Soviet era. All the analytic results from the drill campaign will be included in a new resource estimate, which is expected in the second quarter of 2013.

In other news, Global Minerals contracted AGP Mining Consultants, a respected mining consultancy based in Canada with plenty of experience in central and eastern Europe, including underground operations like Strieborná.

AGP will evaluate different underground mining scenarios and processing alternatives, which should give Global a good understanding of the project from an economical and operational point of view. For example, AGP will study the several possibilities to get the mined ore on surface where it can be further processed.

These results will also be included in the upcoming Preliminary Economic Assessment, or PEA.

The Strieborná property is swirling with activity. About 50 people work on site in multiple shifts. Drilling from Level 6 has commenced and a second platform is being prepared to install another drill rig. About 10,000 metres of drilling is expected and results will be incorporated in a new resource update by the first half of next year.

Moreover, the mine is being dewatered down to Level 8, from where more drilling will take place. Areas that have been dewatered are immediately rehabilitated.

We like Global Minerals as Strieborná is a fairly advanced project, given the existing underground infrastructure, with limited downside risk. Metallurgical studies are advancing, Slovakia is familiar with the mining industry and the Company has about $10 million in cash.