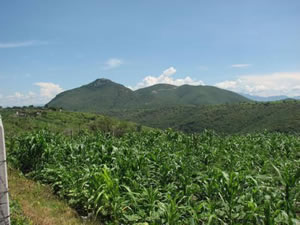 There are no residences on the Cerro Jumil property where project work is being undertaken. And only a very small area of the land is agricultural and used to raise crops such as peanuts, tomatoes, corn, and agave (see photo above).

Esperanza Resources (EPZ – $1.51 & EKX – €1.18) obtained the surface rights agreement for Cerro Jumil. This is a key accomplishment to bring the 100% owned gold property in Mexico towards production.

The agreement with the communal landowners has an initial term of 15 years and provides for continued exploration and development as well as for the planned construction and operation of a mine at the project.

In Mexico, the government basically owns and holds all the mineral and petroleum resources located under the surface of the ground. In other words, the owner of the surface title only controls the land’s surface and the right to work it.

In order for an individual or company to explore and drill for minerals under the surface, they have to obtain the mineral title of the land from the Mexican Ministry of Mining, which is charged with controlling all mining matters.

So while Esperanza already owned the mineral titles of Cerro Jumil since 2003, it first had to come to an agreement with the owners of the surface titles to actually start constructing the mine. This has been accomplished now and continues to move the project forward.

The agreement was reached with the help of the so-called “FIPP program”, which is a voluntary federally funded and administered government program in Mexico that encourages more efficient and productive use of rural land, facilitates a shared investment between rural landowners and public and private investors and ensures legal certainty exists for all parties.

Esperanza’s common shares also started trading in the United States on the OTCQX International market, under the symbol “ESPZF”. This provides US based retail and institutional investors easier access to the Company’s shares.

The OTC platform, operated by OTC Markets Group, is the world’s largest electronic marketplace for OTC-traded equities. It lists more than 10,000 securities trading over $229 billion in dollar value in 2011, an increase of 59% compared with 2010. The OTC listed companies are divided in three tiers:

Esperanza is currently in full preparation of a Bankable Feasibility Study, it started work on a Environmental Impact Statement and is in a straight line to get all the necessary permits to commence mining operations by the middle of next year.

Additionally, the listing on the OTCQX opens up the U.S. investor market. It gives investors access to the Company’s securities through hundreds of online and full-service brokerage firms in the United States, which provide liquidity and execution services.

These are all important steps for Esperanza as it’s transitioning from a development Company to an actual gold producer.