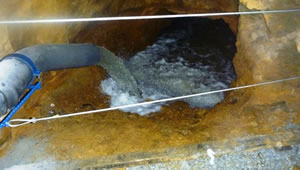 Part of the underground dewatering system at Strieborná.

Esperanza Resources (EPZ – $1.10) had another important week as it closed its previously announced $34 million private placement. At the same time, Global Minerals (CTG – $0.34) , which is 26.8% owned by Esperanza, is well on its way to gain access to the Strieborná vein.

Moreover, the agents, which conducted the offering, partially exercised their agents’ option and sold 3,214,000 special warrants for additional gross proceeds of approximately $4 million.

The net proceeds will be used to further advance Cerro Jumil and for general working capital purposes.

After the Strieborná property was abandoned in 1994, due to very depressed metals prices and the transition from a communist to a market economy in Slovakia, all underground tunnels and shafts were flooded.

To regain access to the silver/copper/antimony mineralized structure of 1.2 kilometres long, 600 metres deep and an average thickness of 3.4 metres, Global Minerals is pumping out all the water, restoring the haulage and access tunnel and adding full electrical service.

Currently, the water has been drained down to about 140 metres deep, and the Company expects to reach Level 6 (~180 m below surface) in a few weeks. After that, a drill program will begin with the intent to expand the resource and to improve the potential economics of the project.

Dewatering will continue to Level 8 (280 m below surface) to get to the internal vertical shaft, which provides access between Level 6 and 13 – the lowest level at 525 metres below surface.

When the water is down to Level 6, a bulk sample of the mineralized ore will also be collected for additional metallurgical testing.

Metallurgical samples, composed of material collected from the spring 2011 drill program were subjected to conceptual level grindability and flotation studies at SGS and Blue Coast Research. Test work demonstrated that a conventional, low cost flotation process yields a high grade silver/copper/antimony concentrate with as much as 5,423 grams silver per tonne (158 tr. ounces per ton), 22% copper and up to 17% antimony.

Antimony is a lustrous grey metallic-looking solid, with intermediate to relatively good electrical conductivities. It’s found in nature mainly as the sulfide mineral stibnite (Sb2S3) and has the chemical symbol Sb, which is derived from the Latin stibium, the name given to antimony sulfide in the classical period.

China is by far the largest producer of antimony. It’s often used as alloying material for lead and tin as it improves the properties of the alloys which are used in solders, bullets and plain bearings. Additionally, antimony is used in some medicines, lead-acid batteries and microelectronics.

With the new bulk sample, Global Minerals will test whether it’s more economical to ship the concentrate to the smelter containing the antimony, or if it’s better to use the hydrometallurgical treatment process, developed by Sunshine Mining and Refining Company, to selectively remove the antimony before shipping it to the smelter.

It’s important to test this because antimony is considered a pollutant and smelters will charge a fee per percentage of antimony in the concentrate. On the other hand, using the Sunshine process has a cost price as well. These two costs will be compared.

The Company is also investigating the handling of arsenic and mercury that is found in the concentrate. Initial results indicate that this can be safely and effectively managed. Additionally, the tests will assess if the small amount of gold in the concentrate could have a positive effect on the economics of the project.

Esperanza Resources and Global Minerals both have a promising project. The Cerro Jumil silver/gold project in Morelos State, Mexico, is moving towards production and Strieborná was already a well advanced project when Global Minerals picked it up.

Moreover, both Companies are very well funded. Esperanza just raised roughly $34 million and Global raised $12.5 million in March of 2012. This is enough to continue the development of the properties in the foreseeable future.