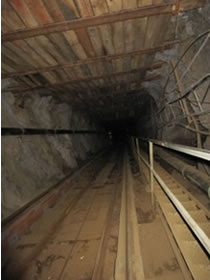 Part of the underground decline at Strieborná from which Global Minerals is pumping out the water. Late spring they’ll reach the bottom, after which they’ll make a connection with the Strieborná vein.

Esperanza Resources (EPZ – $1.32) participated for $1.5 million in the financing and certain Sprott funds and clients of Sprott Private Wealth committed to purchased $10,222,000. Esperanza now owns about 26.8% of all issued and outstanding shares of Global Minerals, while Sprott affiliates control close to 12%.

With a cash position of more than $15 million, Global Minerals now has enough money to restore access to the Strieborná vein, commence an underground drill program to increase the already substantial resource estimate (see below), prepare a Preliminary Economic Assessment and rehabilitate the rest of the property.

Additionally, the funds will also be used to explore some of the newly identified prospects on the Company’s 135 square kilometer exploration block. Trenching and initial drilling at Paca and Cucma, the two most advanced prospects, is expected this year.

After increasing the size of the private placement from $8 million to $11.5 million earlier this month, Global Minerals was, due to high demand, again able to expand the financing to almost $12.5 million.

One unit consists of one common share of Global Minerals and one warrant. The common shares are subject to a four month holding period expiring on July 23, 2012. Each warrant entitles the holder to acquire an additional common share at a price of $0.75 per share until March 22, 2014.

Some of the proceeds of the financing will be used to complete the rehabilitation of the Maria Mine, which provides access to the Strieborná silver vein. Once this is completed, an underground drill program will be initiated to expand the current resource estimate.

The NI 43-101 resource occurs within a mineralized structure of 1.2 kilometres long, 600 metres deep and an average thickness of 3.4 metres. This is the so-called Strieborná silver vein.

In addition to the Strieborná vein, the property includes several parallel veins and similar structures. Although these veins have been explored by underground tunneling and drilling and are known to be mineralized, they have not been included in the above resource estimate as further exploration is required.

The fact that the financing was increased twice and closed at a impressive $12.5 million, proves that investors have confidence in a positive outcome for Strieborná.

Esperanza Resources is in a comfortable position. Next to its own promising Cerro Jumil silver/gold property in the State of Morelos, Mexico, it also benefits from the progress at Global Minerals as it holds 28% of the latter’s shares.