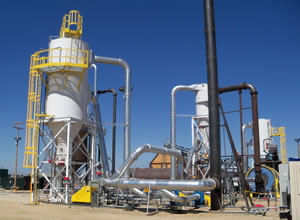 The Global Green demonstration plant operations have been suspended as more money needs to be raised first.

Global Green Solutions (GGRN – $0.03) is suspending operations at its Greensteam demonstration plant because it ran out of money. The Company’s engineers made good progress on emissions, but were unable to get the demo unit’s emissions down to the low levels necessary to secure a air quality permit from the San Joaquin Valley Air Pollution Control District. Greensteam’s technical team believe they know how to reach those low emissions, but in order to do that, the Company needs more time, and thus money.

Although this is a major setback, it’s important to note that the Company isn’t throwing in the towel. As with many young technology companies, raising enough money to keep operations going is a problem. Global Green isn’t an exception to that.

The Company somehow always managed to raise enough money to continue operations, and I thought the closer they came to the finish line, the easier it would become to raise more money. Sadly enough, that hasn’t been the case.

The Company is actively seeking new investors. In the meanwhile, management is evaluating each aspect of the Greensteam project including the technical plan, staffing and overhead.

The objective is to re-start operations as soon as that evaluation is completed and enough money has been raised to implement the results of the evaluation.

This is clearly a disappointment. The last several weeks, the ¼ scale demonstration unit had continuously been producing steam firing biomass fuel. Good progress, albeit slower than anticipated, continued to be made.

It all comes down to the fact whether Global Green can raise enough money to restart operations in the coming weeks. It’s clear this is a matter of weeks, rather than months, as the technical staff that has been working on this project for years, won’t remain available indefinitely.

For now, I lower my advise on Global Green to Hold. After the Company has released more information about its restructuring, I’ll reconsider my advice.