Worldwide mining and exploration activity is gradually returning to normal following the worst of the Covid-19 virus crisis. Anticipation is building for the first modern exploration program to commence at the Silver City Project in Germany. Acquired by Globex Mining Enterprises Inc. (CA: GMX – $0.40 & US: GLBXF – $0.27 & GER: G1MN – €0.24) in 2017 on the basis of its long history of prolific mining activity, the project was largely overlooked for more than a century.

Globex evaluated the scale of past mining and envisioned the potential for further discovery to resume activity in the district. The Company engaged in preliminary fieldwork and geophysical surveying while the database of historical mining was under review. A modern, systematic exploration campaign was in planning to begin thereafter.

However, in September 2019, Globex arranged a transaction for the project with Excellon Resources Inc. [EXB]. The terms of the deal require Excellon to issue payment in cash and shares for a period of three years to earn 100% ownership of the project.

Initially, Excellon will focus on the underexplored silver zones of the property. Drilling activity will be concentrated in close proximity to historic silver mines.

The benefits for Globex shareholders from the transaction are attractive. Just the cash portion of the deal is worth several times what Globex invested to initially secure the property. With accumulated minority ownership in Excellon through the shares issued in payment, Globex also retains leverage to upside value if ongoing exploration is successful.

Perhaps the greatest value proposition is yet to be realized. Globex retains a Gross Metals Royalty (GMR) on all future production from the project. This includes a 3% royalty for the precious metals, and a 2.5% royalty against all other metals. The GMR is held in perpetuity, although Excellon may repurchase part of the outstanding royalty for a cash payment. Regardless, this GMR represents a valuable consideration that may yet generate a significant stream of cash payments to Globex.

Globex shareholders may thus find the news very appealing that Excellon is commencing its first drilling program at Silver City. Consider that the historic silver mining at the property continued for more than 750 years. Extremely high grade ore was reported, with silver values up to 3500 g/t mined during that time. Mining came to a halt in the 1870s. In fact, almost no modern exploration was completed since.

Silver City comprises what amounts to an entire historic mining district within its property boundaries. Spanning an area of 164 square kilometers, the project includes extensive geological trends. Silver enriched veins and deposits have been mapped within a corridor extending 36 kilometers along strike on the property. Alteration zones up to 5 kilometers in width exist within this corridor. There is also the potential for valuable deposits of other minerals to be discovered, including zinc, barite and graphite.

The previous mining rarely extended deeper than 200 meters below surface. However, the Mineral Systems Analysis Group with the Freiberg University of Mining and Technology estimates that resource zones may extend to depths of 450 meters. The opportunity for a high profile discovery to emerge at Silver City is attractive indeed.

Excellon is effectively positioned with a head-start for its exploration plans. The remnants of historic mines and surface workings outline a large area where high grade resources were extracted. Thereafter, research completed by mineralogical groups contributed to the database. High profile targets await further investigation.

Initially, Excellon will focus on the underexplored silver zones of the property. Drilling activity will be concentrated in close proximity to historic silver mines. Excellon has been granted permitting approval for a drilling program of 15 holes. In total, about 2500 meters of drilling will be completed. However, if positive results are encountered during the program, Excellon may extend work to add a further 12 drill holes under this plan.

An experienced international drilling company is under contract to complete the program. Excellon expects the first drill hole will be underway prior to the end of this month. Samples will be submitted for laboratory assays, and the first results may be in hand as early as a month after drill core is extracted.

There is a regional significance to the Silver City Project and the long history of mining in Saxony, Germany. Established institutions within the local area that specialize in mining and exploration technology are aware of the magnitude of this former mine complex.

Earlier this month, Excellon announced an agreement with a prestigious institution to collaborate during the exploration process. Located just kilometers from the project, the Helmholtz Institute Freiberg (HIF) for Resource Technology is engaged in R&D for advanced exploration technology. HIF regards the pending drill program as an opportunity to participate in a world class exploration target in its own back yard.

Excellon will provide samples of drill core from the current program to allow HIF to complete additional testing. Exploration technologies may be developed in real time as the work continues. This will include hyperspectral analysis of drill core, which is expected to provide accurate preliminary data for mineralogy and grade. This in turn may enable Excellon to adjust its drilling program on the fly without having to wait for additional assay results from lab testing.

HIF was set up by the German government to support exploration and mining initiatives within the country. The unit also works in partnership with the University of Freiberg. A relationship also exists with European EIT raw materials network. Suffice to state that the importance of this program goes beyond that of a speculative exploration effort, in terms of the overall regional context for this project.

Excellon has arranged a live online presentation to highlight the pending exploration program at Silver City. The Senior VP of Exploration for Excellon, Ben Pullinger, will be discussing the project and the exceptional potential for a significant discovery. Among the topics to be covered, the historical perspective of this district and the scale of previous mining activity will be outlined. Investors may register to participate in this live broadcast through the Toronto Geological Discussion Group website.

We also understand that the airborne magnetometer survey at Globex’ Francoeur/Arntfield/Lac Fortune gold project in Quebec is progressing very well. In fact, the data collection for the survey has been completed. A new type of helicopter was used, which enabled a very precise, low-altitude flight plan. As a result, extremely detailed and high resolution imaging is expected to be generated from the interpretation of this data. 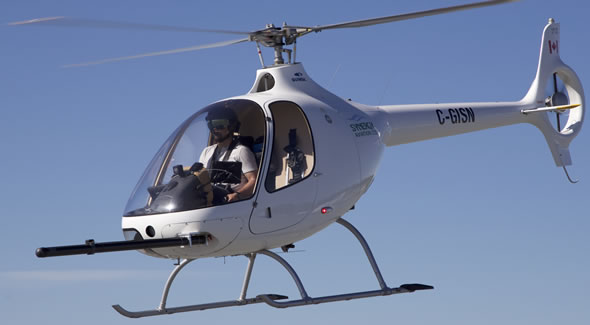 Because the helicopter is relatively small, the motor doesn’t interfere with the readings and it can fly at tree top level, giving great readings. The magnetometer is in the arm sticking out in the front. It takes 1,000 readings per second.

When the geological imaging based on this survey is available, it is expected to provide greater clarity for structural target zones hidden below surface on the property area. This may help unlock further discovery success as key features related to gold alteration are illuminated for further investigation.

Globex is impressed with the performance of the geophysical program such that the Company has opted to immediately complete similar surveys for other of its high-profile properties. Management believes that the potential to achieve greater success through subsequent exploration work is enhanced by this opportunity.

The odds for achieving a significant mineral discovery are much higher in proximity to historic mines than for a typical Greenfields prospect. Given the enormous size of the Silver City property, and the magnitude of historic mining activity extending back for centuries, one may expect it to be of even greater potential. Taken in context that almost no modern exploration activity has been underway since the previous mining was winding down more 150 years ago, the attractiveness of this project is self-evident.

Excellon expects to carry the torch at Silver City to a new era of prosperity. The commencement of a diamond drilling program to investigate some of the many target areas could begin the process to outline valuable precious and base metals deposits that were overlooked in the past. Assisted by an experienced drilling contractor, and advanced systems deployed by a faculty specializing in exploration technology, the odds are that much better. And Globex is directly leveraged to this enhanced discovery potential, through its minority ownership interest of Excellon share capital and also through the GMR held against the property in the event that mining activity resumes.

Silver City is just one of many such projects that Globex has vended in transactions to create shareholder value. Advancing under the leadership of optioning partners, the exploration costs are borne by other companies. However, the leverage to a successful outcome at any of these projects could generate a windfall of royalty income to Globex for years in the future.

As one of the most successful project generators in Canada, Globex has amassed a speculative upside based on dozens of projects that are advancing through the activity of partner companies. The exciting exploration program about to commence at Silver City is yet another illustration of the potential for this business model. Smallcaps Recommendation: BUY.