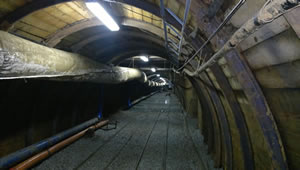 Part of the tunnel at Level 6 from where are the drilling took place during the past drill campaign.

Global Minerals (CTG – $0.135 & DFPN – €0.108) released analytic results on all remaining drill holes from its underground drill program at Strieborná. These results are particularly interesting because they not only prove that mineralization extends towards the southwest, but also at least 50 meters above the top of the previously estimated resource (see cross sections below).

Drilling has now been completed at the 100% owned silver/copper project and all drill data is currently being incorporated into a new resource update. Based on the excellent vein widths and high silver grades that were found during this drill campaign, it’s fair to say that the previous resource will be increased.

Moreover, the project’s economics will most likely improve thanks to the discovery of the upward extension of the vein, which provides early access when actual mining commences.

The final 12 holes, drilled from drill site 2 on level 6 (approximately 180 meters below surface) all intersected mineralization. The holes confirm the presence of the high silver grade in the current Strieborná resource area (see grey area on cross sections) and also indicate the extension of the mineralization to the southwest and upwards.

The entire Strieborná resource area, as it’s known today, was derived by channel sampling and diamond core drilling, conducted by previous owners of the property.

Looking at the cross section below (click image for larger view), the top of the resource is situated around Level 7 over a length of approximately 300 meters. It then appears that the resource dips to Level 9 where it continues for an additional 1,000 meters.

In reality, the top of the resource, outside the red ‘Focused area’, is most likely to continue at, or even above, Level 7, as proven by the latest drill results. The reason that there’s no mineralization shown between Level 7 and Level 9 outside the Focused area, is that no drilling or channel sampling was ever conducted there.

Also the vertical continuity of the resource was only tested in the middle of the vein by underground drilling from Levels 6, 10 and 13 (see the bulge of the resource area below Level 13). In reality, the vein is expected to continue much deeper and wider than shown on the cross sections.

Other veins in the Rož?ava ore field, of which Strieborná is part, typically are approximately 1.5 km wide and more than 500 meters in vertical extent.

Now that drilling has been completed, the Company can focus on the following steps to move the Strieborná project towards production.

First, an updated resource estimate, based upon the drill results from the past campaign, is being prepared and is scheduled to be published in July.

Secondly, metallurgical tests to assess the most commercially beneficial method to produce silver/copper concentrates, are being finalized. Metallurgical samples, composed of material collected from the spring 2011 drill program were subjected to conceptual level grindability and flotation studies at SGS and Blue Coast Research. Tests on the collected samples demonstrated that a conventional, low cost flotation process would yield a high grade silver/copper concentrate with as much as 5,800 grams silver per tonne (186 tr. ounces per ton) and 25% copper at recoveries of 94% for silver and 96% for copper.

Also, engineering studies to determine the most optimal way to get the mined ore to the mill site are almost finished. AGP Mining Consultants, a well-respected mining consultancy with lots of experience in central and eastern Europe, is looking at different underground mining methods, but sublevel stoping seems to be the most likely scenario.

Next, the new resource estimate, results from ongoing metallurgical tests and the report from AGP will all be incorporated into a Preliminary Economic Assessment (PEA), which is expected in the third quarter. The PEA will give a clearer image on the cost estimate to take Strieborná into production.

In the meantime, the Company is reviewing various financing alternatives to take Strieborná to production. The CAPEX to put the mine into production is estimated to be well below $100 million.

The recent drill program has clearly expanded the current resource upwards, which is good news as those areas are most accessible in the proposed mining sequence.

Furthermore, drilling has shown that although the resource area already looks impressive, and provides many years of mining opportunity, the actual vein is much bigger than what’s shown on the cross sections.

And finally, next to the actual Strieborná vein the entire 135 square kilometer property has much more upside potential. To date, four more veins, parallel to the Strieborná vein, have been identified. During the 2011 field season, the Company identified several potential surface drill targets in each of these areas.

So basically, Global Minerals is a Company with a project that’s moving towards production, which has excellent on-surface and underground infrastructure, a solid management team and lots of upside resource potential.