Thanks to EnWave Corp’s (TSXV:ENW – $1.34 CAD & OTC:NWVCF – $1.05 USD & Frankfurt:E4U – €0.87) ongoing collaboration with the US Army Natick R&D Center, the development of new nutritious and lightweight meals for military issue continues to advance. A variety of REV-dried products, such as a cheddar cheese energy bar, and a mocha desert bar, were recently displayed as part of a demonstration event held at the Pentagon courtyard.

These new food products accomplish the objective to deliver enhanced nutrition while also substantially reducing the total weight of the rations compared to other options issued to military service members.

The advantages afforded by the Radiant Energy Vacuum (REV) technology allows about half of the moisture content of the foods to be removed, thereby ensuring longer shelf life and lower weight for the rations, while maintaining the flavor and original texture of the meals. Moreover, REV represents an improvement over the option of freeze-drying foods, as they do not require adding water before consuming the rations.

Meals Ready to Eat (MRE) are the primary meals issued to the military during field deployment. Each MRE allotment is intended for a single meal for one soldier, including a main entrée, sides, and a beverage. They are packaged for easy distribution, and to maintain a long shelf life without spoiling under intense conditions that may be encountered in the field.

About ten years ago, the Defense Department’s Combat Feeding Directorate (CFD) began fielding the First Strike Ration (FSR), which was designed to give combat troops the equivalent of three MREs a day in a compact, lightweight package. The First Strike Rations were about half the weight and size of a day’s worth of MREs.

Prototypes of the Close Combat Assault Ration (CCAR) however, developed in cooperation with EnWave, weigh even less – about as much as one MRE – and offer a 76 percent reduction in size, according to Jeremy Whitsitt, deputy director of the CFD. 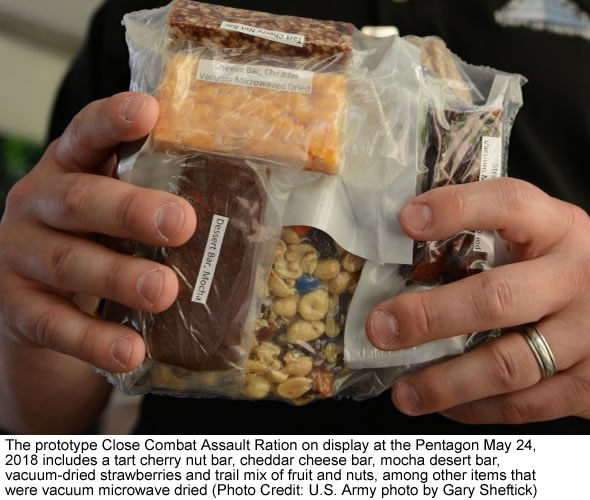 The new rations would reduce the weight an infantryman will need to carry on a three-day mission by almost 10 percent. Consequently, rather than “field-stripping 9 MREs and taking things that are easy to carry, they can take three of these Close Combat Assault Rations and still get 3,000 calories a day but have more room in their pack for more ammunition, more medical supplies, more water — things that will keep them in the fight longer,” Whitsitt continued.

“It’s designed for those guys like Army Rangers, special ops guys, light infantry — guys that would potentially be in a mission scenario that would require them to carry multiple days of food without the potential of being resupplied,” Whitsitt concluded.

The goal is to begin testing the CCAR in 2020 and fielding it to replace the FSR in 2023. The CCAR will not replace the MRE, which will remain the primary field ration.

The opportunity to showcase some of these highly nutritious new rations at this prestigious demonstration, including vacuum dried strawberries, a trail mix of fruit and nuts, and even a spinach quiche packet, is yet another powerful validation for EnWave and its REV technology. 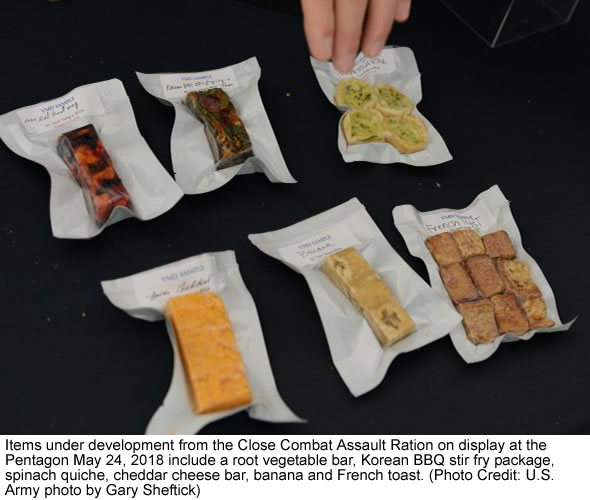 A Busy Schedule of Events and Trade Shows

The successful rollout of EnWave’s Radiant Energy Vacuum technology continues in part due to the strategy to participate in high profile trade shows and conferences, where the Company has the opportunity to interact directly with potential clients.

EnWave is currently attending the Food Machinery & Technology Exhibition (FOOMA) in Tokyo, Japan. FOOMA is a high profile event showcasing products, technology, and food processing services. EnWave actually has an operating 2kW REV machine in its booth as part of its marketing plans for the show.

While the event at the Pentagon was limited to military insiders, the food product line of military rations under development will be on display during the Institute of Food Technologies (IFT) conference to be held from July 15-18th in Chicago, Illinois. The ITF Food Expo is one of the largest conferences of its kind, attracting food industry decision-makers from around the world. ITF is therefore an ideal event for EnWave to interact with insiders and highlight the ability of REV technology to improve on existing processing options, and for the development of new products.

The recently concluded event at the Pentagon, along with the follow up demonstration planned at IFT in Chicago, will serve to illustrate the progress in development of efficient new food products using the REV technology. The potential market for these foods for military issue is enormous. However, the ongoing development work is itself an important marketing opportunity that EnWave may use to attract new clients and grow its sales.

In a field deployment there are great benefits realized from issuing rations that are lighter in weight, within smaller packaging, and ready to eat with minimal additional preparation required. The bonus from these products developed using REV machines is that they are also considered to be much more appealing and flavorful to eat, as reported during preliminary testing with soldiers.

The importance of a strong presence at high profile demonstration events is often underestimated in terms of marketing clout and the contribution to a successful sales strategy. However, networking at targeted events, where the sales team meets with industrial end users and discusses all the benefits of REV technology, has contributed to achieving meaningful sales contracts along with partnership opportunities to develop entirely new products.

Meanwhile, other events on the calendar may also open new doors, generate new leads, and present new sales channels that build on the successes of earlier marketing efforts. Recommendation: BUY