EnWave is already building the 10Kw nutraREV machine for Umland, and will receive a 5% royalty on the wholesale value of all cheese snacks that are produced and sold. Production and distribution of the snacks are scheduled to start in the current quarter.

Point32 Foods LLC will handle the distribution. Point32 is one of the partners in Umland and has broad experience in the kosher and natural food industry. What makes is very interesting is that Point32 Foods is already a manufacturer and distributor of freeze dried foods such as yogurt, smoothies, fruits, and veggie snacks.

The fact that this company, which has been using regular freeze drying equipment for several years, now turns to an innovative REV machine is a strong validation and recognition of EnWave’s technology. Moreover, it could be an indication that Point32 considers switching their entire production to REV.

Food that may be consumed according to halakha (Jewish law) is termed kosher in English, meaning “fit” (in this context, fit for consumption). Among the numerous laws that form part of halakha are the prohibitions on the consumption of unclean animals, such as pork. The same applies to dairy products. Milk, for example, is only kosher when it comes from a kosher animal, such as cows and sheep, while milk from a non-kosher animal, such as horses and camels, is non-kosher.

Noteworthy is that the deal with Umland was unexpected in that EnWave never announced a cooperation or research agreement. This leads us to believe that Umland’s test period was relatively short. The 51% EnWave owned NutraDried business, which is showing strong commercial success with its cheese snacks, obviously also makes it easier for other parties to commit. 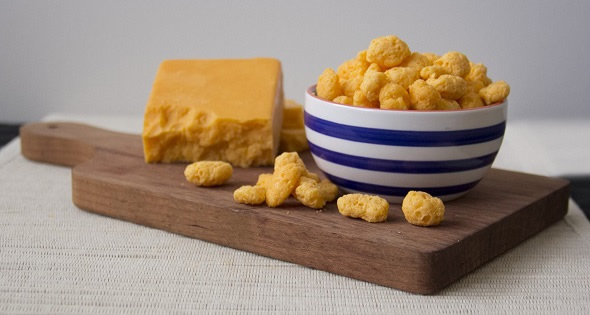 Thanks to its growing number of distributors, NutraDried has secured additional distribution. Today, Moon Cheese is available in approximately 1,700 locations across the United States and Canada.

In addition, a few weeks ago, EnWave announced that, commencing in June 2015, Cheddar and Gouda Moon Cheese snacks will be part of a sixteen week long trial program at 3,500 locations of a major coffee chain in the United States. If, for example, only 2 packs of Moon Cheese are sold per day in each store at a realistic $2 wholesale price per pack, the 16-week trial period would generate $1.56 million in sales.

The Umland cheese snacks will be similar to the existing NutraDried Moon Cheese snacks, except that a kosher cheese brand will be used.

Although selling state-of-the-art dehydration equipment remains EnWave’s core business, it’s clear that the decision to start producing cheese snacks was very smart as it provides an immediate and growing source of revenues. Moreover, having a fully operating REV machine that manufactures cheese snacks, is very useful to show prospective buyers what REV technology is capable of.

With Umland, EnWave reached another success in the cheese snack business. It’s too soon to tell how much revenues this deal will generate for EnWave. However, Point32 Foods switching from regular freeze drying units to a REV machine is equally as important. It shows that manufacturers are paying attention to EnWave and that they’re slowly but surely giving the benefit to the superior REV technology. Take advantage of the weakness in the market to add some shares to your position.