The sharp and unexpected fall of oil prices, from $100 per barrel less than a year ago to about $50 per barrel today, has resulted in a drop in diesel prices. Because natural gas prices at the pump have remained relatively stable in the $2.00 to $2.25 per gallon range, the price spread between diesel and natural gas has tightened.

While the wait-and-see attitude of potential customers has its impact on the Company’s financials in the short term, it’s making headways with its technological innovations and in specific niche markets. As such, American Power Group has plenty of growth opportunities. In addition, it’s significantly expanding the number of engine families that it’s allowed to retrofit by the Environmental Protection Agency (EPA).

The Company’s dual-fuel technology is a non-invasive system that enables stationary and vehicular engines to run on diesel fuel together with either liquefied natural gas, compressed natural gas, pipeline or well-head gas, and bio-methane, with the flexibility to return to 100% diesel fuel operation at any time.

The EPA’s testing and compliance procedures to get approval differ based on the age category of the vehicle or engine that is being converted. There are three categories:

The initial focus of the Company was on obtaining approval to install a dual fuel conversion system for a large number of engine families within the OUL category. These engines types account for 2+ million of the estimated 3 to 4 million Class 8 trucks on the road today in North America. During the past couple of years, APG received an astonishing 456 approvals from the PEA that cover engine model years from the mid 1990’s to 2009 for six of the top seven OEM engines. 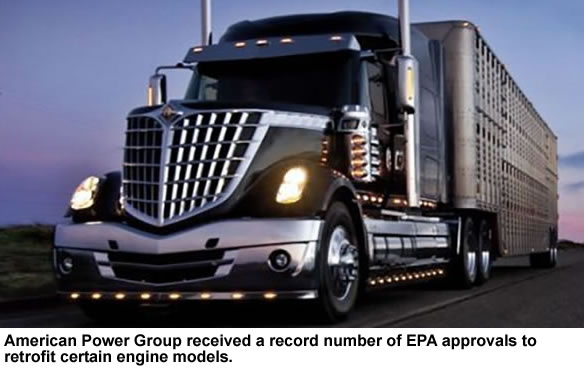 With OUL approvals practically complete, the Company turned its attention on obtaining approvals for Intermediate Useful Life (IUL) engines. Another 600,000 to 700,000 Class 8 trucks fall into this designation. Although the IUL approval process is more expensive than OUL because of additional testing requirements, the IUL addressable market is strategically important because it allows APG access to the medium to larger fleet owners who operate 300+ vehicles and who keep their trucks 4-5 years.

Lyle Jensen, American Power Group’s President and CEO commented: “One of the most important attributes of APG’s non-invasive Dual Fuel System for truck owners who rotate their fleet every four to five years is the ability to transfer the APG system and natural gas tank to their next vehicle at the time of rotation. For a few thousand dollars, the next truck in rotation can be up-fitted with the existing APG Dual Fuel System and natural gas tank and APG’s read-only electronic control module will be re-programmed to the next applicable EPA approved engine model. APG’s system and third-party natural gas tanks are rated for a 15 to 20 year operating life that can generate estimated lifetime fuel savings measured in the hundreds of thousands of dollars or multiples of the total dual fuel investment.”

As mentioned above, APG’s sales have declined due primarily to slower Canadian oil and gas conversions and delayed vehicular orders. Net sales for the first quarter of fiscal year 2015, ended December 31, 2014 decreased approximately $787,000 to $1.06 million, compared with the first quarter last year.

Despite the lower revenues in the first quarter, the Company’s backlog was $1.6 million at December 31, 2014, which is 4.5X higher than the backlog a year ago. In addition, APG closed a new $3.2 million expanded and extended bank credit facility as well as a $2 million capital raise with a strategic investor. The Company now has enough money in the bank to execute its growth plans.

And there are plenty of growth plans and opportunities for American Power Group.

Because of the current low diesel/natural gas price gap, there will be customers that adopt a wait-and-see attitude before making their initial commitment to natural gas or commit to additional follow-on dual fuel related capital expenditures. As a result, we expect APG’s year to start slow, but gain momentum as it continues its sales training with the natural gas supply partners’ sales teams, adds more IUL engine approvals, and completes the multiple Latin America evaluations currently in place.

In addition, there are many fleet owners who are looking for long term overall cost efficiencies and appreciate that it’s only a matter of time before $3.50+ diesel prices return. We believe those who have the foresight to build competitive strength in a down market will use 2015 to complete their dual fuel natural gas testing in order to hit the ground running for the next cycle of diesel prices. Hold on to your shares of American Power Group.