In order to do so, EnWave and NutraDried signed a Technology Evaluation and License Option Agreement that grants the latter the right to develop various protein matrix products, such as sports nutrients, protein bars, complete meal replacement snacks, and dietary products. Upon signing, NutraDried paid EnWave an upfront fee.

We can’t help feeling that this deal will rapidly evolve. Especially because it was immediately mentioned in the press release that if commercial protein matrix products were developed by NutraDried, that Spire Enterprises would become the distributor in the United States. In our opinion, the first Radiant Energy Vacuum (REV) dried protein bars and nutrients could see the light of day in a few months. Moreover, we wouldn’t be surprised if Spire already had an end customer in mind for the new products.

Nutrition and energy bars are part of a broad cultural shift towards healthier food products, as they fit right in a busy lifestyle. Instead of eating three meals a day at set times, these snacks are ideal to eat throughout the day at home or on the go.

A recent Packaged Facts report estimates the market size for cereal /granola bars and energy/nutrition bars in 2016 at USD$8.3 billion, for a compound annual growth rate of 7.5% over the five-year 2012 to 2016 period. 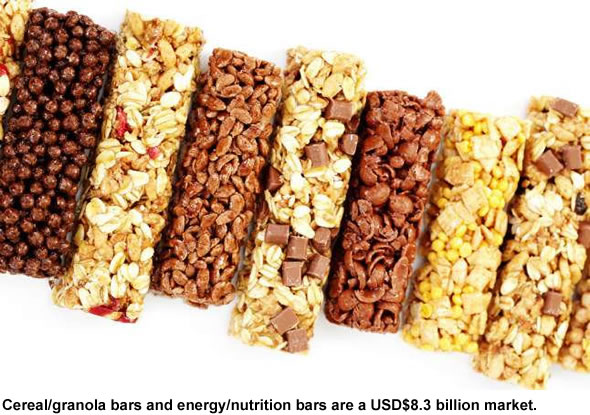 The added value of EnWave’s REV technology is that the dried fruits and nuts retain their flavor, color and nutrient concentration. In addition, REV heightens the efficacy of the proteins. It goes without saying that these are highly sought after qualities for food ingredients.

Last week, NutraDried signed a Master Supply and Distribution Agreement with Spire Enterprises to accelerate sales of the already highly successful Moon Cheese snacks. Next to 3,400 Starbucks stores, Moon Cheese is currently available in approximately 6,000 individual locations across North America. Spire will leverage its vast network of distribution relationships, including Pepsi bottling distributors throughout the U.S., to aggressively expand the availability of the snacks.

Spire is obligated to purchase a certain amount of product on a quarterly basis so that NutraDried is, at least, cash flow positive. This way, EnWave won’t have to invest any more money in NutraDried. Even to the contrary, the subsidiary will most likely become a cash contributor.

More and more food and biopharmaceutical products are realizing that REV is the way to go if they want to stay one step ahead of the competition. Because of EnWave’s business model, in which territorial exclusivity is granted for certain products, it’s a matter of signing an agreement first.

This is especially notable by the number of research and commercial contracts EnWave has closed the past few months. While the deal flow at most companies is relatively slow during the summer, it’s been extremely busy at EnWave. Hardly a week goes by without an new agreement being announced. This indicates that there’s no time to waste and that companies want to move forward fast.

The worldwide market size for dried products is estimated at an astonishing $400 billion. The largest segment, estimated at $140 billion, is the food industry, which includes dried fruits, vegetables, meats, etc. The biopharmaceuticals segment comes in second with a $67 billion market share, closely followed by probiotics, food cultures and enzymes, that generates $61 billion annually.

Moon Cheese proves how popular a product can become in a short while if it has some unique qualities. We’re convinced that the new NutraDried product line can equal that feat.

Sooner than later, investors will realize what a fantastic opportunity EnWave truly is. We’re adding some shares to our portfolio.