Less than three weeks after Costco launched Moon Cheese at its Northwest stores, the well-known chain of membership warehouses, already placed a second order, indicating that sales are way above expectations.

EnWave Corp. (TSXV:ENW – $1.45 & OTC:NWVCF – $1.16 & Frankfurt:E4U – €0.93), which sells the crunchy cheese snack through its wholly owned subsidiary NutraDried, secured an initial order, worth approximately $500,000, from the Northwest division (purple area on map) about a month ago. We can only guess, but sales must have gone through the roof, as Costco already felt the need to restock.

Starting in December 2017, the all-natural REV dried cheese snack became available in Cheddar and Pepper Jack flavors in approximately 70 stores at Costco’s Midwest division (blue area on map). For the first time, NutraDried offered the 10 ounce packages – coined the club format. These retail for about $10, while the regular 2 ounce packages sell for $3.99. Last month, a substantial repeat order was received from the Midwest division.

NutraDried will continue to pursue expanded distribution with Costco through both additional repeat orders and potential expansion into other Costco divisions. The Midwest and Northwest divisions together count approximately 120 stores. Knowing however, that Costco in total has over 500 stores in the United States, it’s clear that there are ample expansion opportunities.

The four orders from Costco, combined could be worth well over $1.5 million, also demonstrate the success of the club format packaging. Consequently, NutraDried is vigorously pursuing additional club format distribution opportunities to build further momentum. 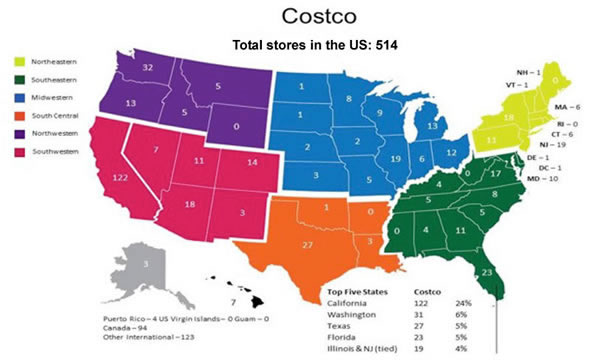 EnWave also continues to expand its efforts in the cannabis space, as it signed a Technology Evaluation and License Option Agreement (TELOA) with a major Canadian cannabis player.

EnWave hasn’t released the name of its new partner, but it did mention that it is one of Canada’s largest licensed cannabis producers (LP). When doing an online search for the biggest cannabis companies, returning names are Canopy Growth, Aurora Cannabis, Aphria Inc., and MedReleaf Corp., all billion dollar companies!

The Licensed Producer was granted six months to evaluate EnWave’s Radiant Energy Vacuum (REV) technology for cannabis decontamination and dehydration. During that period, the LP will rent a pilot-scale REV dryer, which will generate revenue for EnWave. Moreover, EnWave granted the LP an exclusive option to license the REV technology for processing cannabis in an unnamed European country.

This new deal is obviously an important new step for EnWave to expand its presence in the cannabis industry. Late 2017, it already signed a royalty bearing agreement with Tilray, a major Canadian cannabis player with international presence and an Authorized Licensed Producer.

The exclusive license granted Tilray the exclusive right to use the Company’s proprietary REV dehydration technology to dry and decontaminate cannabis in Canada. This agreement was expanded in February 2018 to also include Portugal.

Also important to note is that royalties in the cannabis industry could be up to three times higher than what EnWave receives from companies that are active in the food sector.

Moon Cheese at Costco is a exciting success story in the making. Sales are clearly going very well, and each Costco purchase order represents significant revenue growth for NutraDried.

With solid profit margins and additional revenue opportunities, NutraDried is well positioned for growth which in turn further solidifies the business case for the use of EnWave’s technology to produce high quality, nutritious snacks.

The constant flow of excellent news from EnWave is finally being reflected in its shares price. The stock is now up 50% on solid volume since its most recent low of 96 cents in December 2017. We feel this is only the beginning though. Recommendation: BUY.