Since Tuesday, Cheddar and Gouda Moon Cheese snacks are available at approximately 3,400 Starbucks locations in the United States.

The standard 2oz cheese packs will be promoted in-store during the first nine weeks of the program, while the following seven weeks will be used to collect sales data and to determine whether the product can sell without extra promotion.

Based on this trial period, Starbucks will determine if it’s justified to continue selling the product. If sales go well, it may even expand distribution to more locations.

Many on social media have already “Liked” the Moon Cheese snacks at Starbucks. One of the most popular unofficial Starbucks blogs StarbucksMelody commented: “The Cheddar Moon Cheese was incredible. It’s like extremely fancy Cheetos. I strongly suggest you try this! For the aspiring coffee masters reading this, I bet Moon Cheese would pair beautifully with Sumatra.”

The Starbucks deal is excellent for NutraDried, the producer of Moon Cheese, and as such also for EnWave Corporation (TSXV:ENW – $0.90 CAD & OTC:NWVCF – $0.69 USD), which holds a 51% stake in NutraDried. If, for example, only 2 packs of Moon Cheese are sold per day in each store, the 16-week trial period would generate $1.56 million in sales at a realistic $2 wholesale price per pack.

Starbucks typically designs menus to meet the needs of customers at different times of the day and evening. For the summer months, the large coffee chain created a snack selection for the millions of Americans on the go, from getting an early start at work, going on picnics, taking road trips, to backyard camping.

Most of the 3,400 stores are located in major metropolitan areas and were selected because they are known to have customers who are more likely to buy these kind of grab-n-go type items. 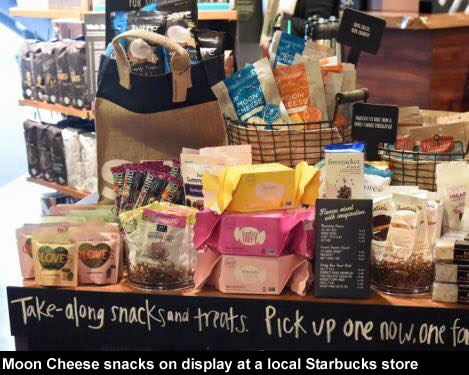 Ellie Halevy, Starbucks vice president, Food commented: “Since so many people are snacking these days, we decided to increase the number of snacks we offer in our stores. We looked for companies that could help us provide a wider variety of options both sweet and savory.”

Lake Blue has submitted a purchase order, and immediately paid a deposit, for a small commercial REV machine. In addition, Lake Blue has agreed to pay a 5% royalty to EnWave on the wholesale value of the dried cheese products they sell. First production is expected late 2015.

Lake Blue plans to build a market for several dried cheese products and if successful, purchase a large commercial REV unit within the next 18 months. Moreover, it plans to pursue other REV-dried product opportunities, such as dried fruit and vegetable products.

What makes this deal very attractive is that Lake Blue is an experienced company with over 60 years of dairy and meat production history in Chile. A company that has been around for that long, usually has a vast network of contacts and distributors to make a product succeed.

Looking for the reason of the drop, we can exclude short selling, as only 6,200 shares are shorted at the moment. A much greater possibility is that a large institutional holder liquidated (part of) its position. This is an odd time to sell shares of EnWave as its outlook has never been better, but sometimes funds have to deal with unexpected redemptions. Perhaps the huge volume, last week on Thursday – more than 1.5 million shares traded hands – signaled the final chapter. On that day, the stock dipped to 69 cents and has since recovered to 90 cents.

On the flip side, this presents a short-term opportunity to pick up some additional shares at an inflated stock price. And that’s exactly what we’re going to do.

Although selling state-of-the-art dehydration equipment remains EnWave’s core business, it’s clear that the decision to start producing snacks was very smart. According to a study by the Hartman Group, snacks represent 50% of what Americans eat each day.

Thanks to its growing number of distributors, NutraDried has secured additional distribution in several Canadian and U.S. grocery chains. With the addition of the 3,400 Starbucks shops, Moon Cheese is now available in over 5,000 stores.

In the meanwhile, EnWave is really accelerating its number of commercial start-ups that generate royalties. During the past few weeks, it started up three commercial REV machines. The first unit was installed at Umland LLC, which sells high kosher cheese snacks, the second at Gay Lea, the second largest dairy co-operative in Canada and the third one at Natural Nutrition, a Chilean fruit processor. Lake Blue will be added to that list later this year. Buy recommendation.