The decrease in revenue is primarily due to a lower number of purchase orders for Radiant Energy Vacuum (REV) machinery. The timing of large-scale machine purchase orders is hard to predict, and in this year’s third quarter less orders were received compared to last year’s. However, the Company is making up for this… fast.

Since April 1st, 2017 EnWave received the following REV purchase orders:
• An order for a 10kW small-scale machine from Pitalia, a Costa Rican company formerly operating under the name Agricola Industrial La Lydia S.A. This order represents the second purchase of a 10kW small-scale machine by Pitalia for processing fruits in Costa Rica.
• A few weeks later, Pitalia ordered a large commercial 100kW quantaREV, representing a significant expansion of its royalty-bearing processing capacity. Delivery of this machine is expected for mid-2018. It will allow Pitalia to start selling pineapple, apple, mango and banana snack products through its Pure Joy brand in the European and South, Central and North American markets. This order alone is estimated to be worth approximately $1.5 million.
• An order for a 10kW REV dryer from Ashgrove Cheese, a diversified dairy processor based in Australia. The goal is to produce dried cheese products similar to EnWave’s Moon Cheese snacks.

And it doesn’t stop there. Just this week, EnWave signed more commercial agreements with machine purchase orders attached (see below).

Moreover, EnWave has numerous prospective royalty partners evaluating its REV technology under Technology Evaluation and License Option Agreements (TELOAs). The strategy under these arrangements is to co-develop product applications using the technology for specific partner opportunities and to ultimately convert them into commercial licenses. EnWave earns revenues under TELOAs from short-term REV machine rentals as well as fees for access to EnWave’s R&D facilities and product development expertise. Since April 1st, 2017 EnWave signed no less than six new TELOAs with food and other processing companies that will evaluate the use of REV technology to develop new product applications.

Finally, the Company made significant progress with the construction and testing of the first commercial powderREV machine for Sutro Biopharma, a U.S. based pharmaceutical partner. More news is expected shortly. EnWave also commenced the assembly and construction phase for the first scaled-up GMP freezeREV for Merck. If the powderREV and freezeREV platforms prove to yield superior performance to incumbent dehydration technologies, it would be a major breakthrough for EnWave.

More Machine Sales in Past Week

The license grants Ultima the exclusive right to use EnWave’s REV technology to process yogurt products in Canada. In exchange for this exclusivity, Ultima has agreed to purchase a 10kW commercial REV machine to enable a focused market trial in early 2018. Subject to maintaining the exclusivity of the license, Ultima is also required to order a larger, continuous REV machine before the end of 2018. Moreover, Ultima will have to pay EnWave a royalty – typically between 3 and 5 percent – on the wholesale price of all REV-dried products sold. 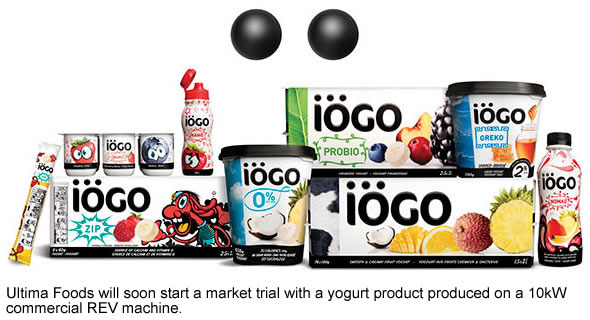 Ultima Foods, a joint venture of two of Canada’s largest dairy cooperatives Agropur and Agrifoods, has over 700 employees and produces more than 100 million kilos (220 million lbs) of fresh dairy products each year at its Granby, Quebec plant. Ultima is a big player in the market, with well-known brands such as Iögo and Olympic.

Also this week, Milne Fruit Products paid a USD$100,000 non-refundable deposit towards the purchase of additional REV machinery. The U.S. based processor and supplier for the industrial food ingredient, beverage, and health & wellness markets has to order REV machines with a total minimum capacity of 100kW within 18 months. This was part of an amendment of the existing commercial license agreement between Milne Fruit and EnWave.

Prior to the amendment, Milne’s exclusive territory for drying blueberries and strawberries with EnWave’s REV technology was the State of Idaho. Now Milne was granted the right to produce those dried fruits in the entire United States.

This deal is a clear win-win for both parties. EnWave will sell more machinery, while Milne Fruit has eliminated any other party from producing REV dried versions of these popular fruits within the United States.

Milne Fruit is one of EnWave’s largest customers. In fact, more than 50 consumer products on the market today already use its ingredients.

Up until a few weeks ago, Milne produced all these products on a large scale commercial dryer. Then, early August a new 120kW quantaREV dryer was commissioned, which significantly expanded the company’s processing capacity. With its new commitment to buy additional machinery, Milne has indicated that the demand for its REV dried fruits continues to grow.

The increase in royalty revenues is due to EnWave’s royalty partners’ advancing the commercialization of REV products in the marketplace, as well as the payment of minimum royalties under the terms of the license agreements. These royalties are expected to increase dramatically over the coming years as additional REV machinery orders, for example from Ereğli Agrosan, Bonduelle, Pitalia, and many others are taken into operation.

Results from NutraDried for the third quarter, and especially the nine months; were negatively impacted by slow transition of the customer accounts from Spire Brands to NutraDried. Remember that in December of last year, Spire Brands, the former master distributor of Moon Cheese, was replaced by Slant Design. Spire was reluctant to turn over all the necessary information, which disrupted the consistency of Moon Cheese orders. This situation was rectified in the third quarter.

Meanwhile, Slant has expanded the distribution of the dried cheese snack into 2,000 Rite Aid pharmacy stores, 1,600 CVS stores, and 440 Targets in the United States. All in all, Moon Cheese in now available in over 20,000 stores in the U.S. and Canada.

However, Trade receivables, Due from customers on contract, and inventory increased by $1.19 million, $.69 million, and $.86 million respectively compared to the previous year. These increases were all related to EnWave’s higher machine production number.

In other news, EnWave hired Adelaide Capital Markets (ACM) to provide investor relations and corporate development services for the Company.

ACM’s President, Ms. Deborah Honig, the president of ACM, has extensive experience working in the Canadian capital markets. As such, the main goal is to introduce the Company to ACM’s institutional investor network in Canada.

The constantly growing number of TELOAs, commercial agreements and machine purchase orders help to build a strong and prosperous future for EnWave. In addition, the higher number of commercial machines is beneficial for EnWave’s royalty income.

As for NutraDried, the transition from Spire to Slant is now complete. This should be positive for both sales and margins.

In addition, several important milestones are ahead. To name two, we could hear more about the cooperation with the US Army Natick Soldier R&D Center to jointly develop low weight, high quality, nutritious field rations for the U.S. and/or about the startup of the powderREV machine at Sutro Biopharma. Success in either one of these cases would be a major event for EnWave. Recommendation BUY.