Sales and distribution of Moon Cheese throughout Canada and the U.S. is building. At the end of fiscal year 2018, NutraDried commissioned its second large-scale 100kW REV machine and doubled its production capacity so satisfy increasing demand for its products.

NutraDried began selling its Moon Cheese product in a 10oz Club Pack format to Costco in the first quarter of 2018 and continues to do so as a product rotation in several of Costco’s divisions. The Company will attempt to secure additional Costco distribution as part of its overall channel strategy.

Next to the success of Moon Cheese, EnWave also sold additional REV machines to both Milne Fruit and Bare Snacks in Q1 of 2019.

Milne purchased its third 120kW REV machine for the production of an extensive portfolio of dried vegetable and fruit applications. The installation is planned towards the end of calendar year 2019, and will significantly increase Milne’s processing capacity for royalty-bearing REV products.

Also Bare Snacks purchased its third REV unit. A small-scale 10kW machine will be used to fill the increasing market demand for its REV-dried snack products. The third equipment purchase by Bare Snacks again confirms the growing commercial acceptance of EnWave’s REV technology in the rapidly-growing “better for you” snacking vertical of the consumer-packaged goods sector. Bare Snacks is a wholly-owned subsidiary of PepsiCo, Inc and distributes premium fruit snacks throughout the U.S. under its Bare brand of products.

EnWave has set the pace for 2019 in its first quarter. It wouldn’t be a surprise if EnWave surpassed total sales of $35 million in fiscal 2019.

Although EnWave is already on the right track to achieve sustained growth and profitability, it has a vast number of solid growth opportunities in its pipeline.

One of the biggest opportunities for EnWave is situated in the cannabis space. As one of the first cannabis companies to recognize the potential for REV technology in its operations, Tilray established a partnership with EnWave in 2017 to begin using REV machines process its significant cannabis production.

In May 2018, Tilray ordered a second 60kW REV machine to serve the Portuguese market, and early 2019, EnWave announced the signing of a royalty bearing license with The Green Organic Dutchman Holdings Ltd. (TGOD), another well-known Canadian cannabis producer. However, EnWave’s REV technology has so many advantages for cannabis processors, that many more of them will follow suit.

In addition, EnWave doesn’t pursue any business activities related to cannabis in the United States until the regulatory environment becomes more favorable. However, in December 2018, the U.S. government signed into law the 2018 Farm Bill, which included the Hemp Farming Act, a bill that removed hemp from the federal list of controlled substances and legalized industrial hemp production. As a consequence, EnWave is now evaluating commercial opportunities in the U.S. for legalized hemp production with its rapid dehydration technology. 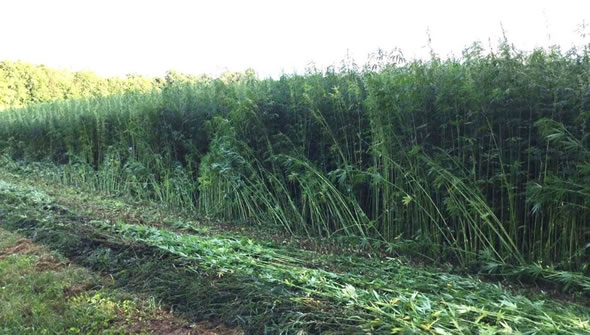 Hemp is distinct from cannabis in that it only has a miniscule concentration of tetrahydrocannabinol (THC), and thus no narcotic capability. Hemp does however contain cannabidiol (CBD), a substance often produced from cannabis that has certain medicinal benefits.

Also in the U.S., further developments are expected this year in regards to the U.S. Army field ration development project. EnWave and the United States Army Natick Soldier Research, Development and Engineering Center (“NSRDEC”) are conducting a collaborative R&D project for the development of nutrient rich field rations for soldiers. The U.S. Army purchased the 10kW REV machine in 2018 to facilitate an accelerated path to improved close combat assault ration deployment. This opportunity for EnWave is enormous, as potentially hundreds of thousands of men and women in active duty could be served REV-dried rations.

In the pharmaceutical field, EnWave has completed fabrication and installation of the first scaled-up Good Manufacturing Practices (“GMP”) freezeREV for Merck as a part of a multi-year project to develop EnWave’s REV dehydration technology for the pharmaceutical industry. The first scaled-up machine was designed to provide Merck with the ability to continuously dehydrate liquid vaccination in vials, and has the potential to displace the need for lyophilisation.

In July of 2018, EnWave also signed a Collaboration and License Option Agreement with GEA Lyophil GmbH of Germany. The two companies will evaluate a potential partnership to manufacture and deploy continuous cGMP REV equipment into the global pharmaceutical sector. No additional news has been announced since, but the negotiations seem to be going in the right direction.

Finally, a few weeks ago, Bonduelle launched its InFlavor dehydrofrozen vegetable product line to its food service customers and confirmed plans to launch its retail product in late 2019. Bonduelle’s InFlavor makes use of EnWave’s REV technology to provide a premium frozen vegetable offering to consumers.

In exchange for exclusive North American rights to use EnWave’s technology to produce dehydrofrozen vegetables, Bonduelle must purchase a 400kW REV machine before September 30, 2019. As consideration for the extension, Bonduelle agreed to pay a milestone payment to EnWave and agreed to buy-out the operating lease on the 120kW quantaREV machine currently operating at Bonduelle’s plant in Sainte-Martine, Quebec.

While 2018 was a breakthrough year in many ways for EnWave, it is clear that the pace of growth will continue to accelerate into 2019. We expect a strong surge in NutraDried sales to at least $25 million, a boost in royalties, and some significant machine purchase orders.

We also expect to see several agreements and orders in the cannabis space in 2019, along with continued positive developments at the US Army Natick R&D Center. Smallcaps Recommendation: BUY.