These solid results can mainly be attributed to increased machine sales and royalties. NutraDried sales were more or less flat as the subsidiary was still impacted by the reorganization that occurred in December of last year. Stronger results are expected in the current quarter.

During the past few months, the Company has continued to push the number of commercial licenses, machine purchase orders and technology evaluation agreements forward.

In addition, EnWave Canada earned royalties of $122,000 during the three months ended December 31, 2016 compared to $48,000 for the three months ended December 31, 2015. Royalties are payable to EnWave as a percentage of the value of products sold or based on the number of units produced by the Company’s royalty partners. The increase in royalty revenues is due to more and more royalty partners starting up commercial production (Also see below).

EnWave Canada reported a net loss of $744,000 for the first quarter of fiscal year 2017, while it had a net loss of $429,000 in the comparable period last year. The increased loss was especially related to the design and construction of a large amount of REV equipment for current and future customers.

NutraDried reported a net income of $126,000 in the first quarter of 2017 compared to a net loss of $54,000 in the first quarter of 2016. Although this is a strong achievement, more growth is expected from the current quarter onwards. A few weeks ago, EnWave implemented organization changes at NutraDried to create operational efficiencies and to allow for growth of the Moon Cheese brand.

It is worth noting that during the first quarter, NutraDried launched its new mozzarella flavoured Moon Cheese at Starbucks and that sales are doing well.

A few items on the balance sheet stand out. First, the “Due from Customers on Contract” figure, which grew by about $538,000 relates to work already performed on equipment construction contracts, but where the amounts are still to be invoiced to the customer based on the contract terms. Also “Inventories” rose with approximately $580,000.

Both items are related to the higher number of REV machines that are being produced at the moment. In addition, the decline in “Cash and Cash Equivalents” is also correlated to higher production activities.

Number of Commercial Products on the Rise

Next to the growing number of research and commercial customers, also the amount of REV dried products on the market continues to rise.

Moon Cheese is by far the most successful REV-dried product on the market today, with sales going into the millions of dollars annually. The crunchy cheese snacks are available in over 20,000 grocery stores across the United States and Canada and in all of Starbucks’ corporate stores in North America.

Most recently, the Chilean food processing company Lake Blue launched four variants of its INTAKT cheese snacks and Merom Farms entered the North American market with Your Wasabi, a dried and encapsulated wasabi powder for the natural health supplement market.

In 2016, two more dried cheese snacks were brought to the market. First, Gay Lea Foods started producing its Nothing but Cheese on-the-go crunchy snack made with 100% cheese. And a few months ago, Portuguese firm Dominant Slice launched a dried cheese product, coined B!t Cheese, for the European market. 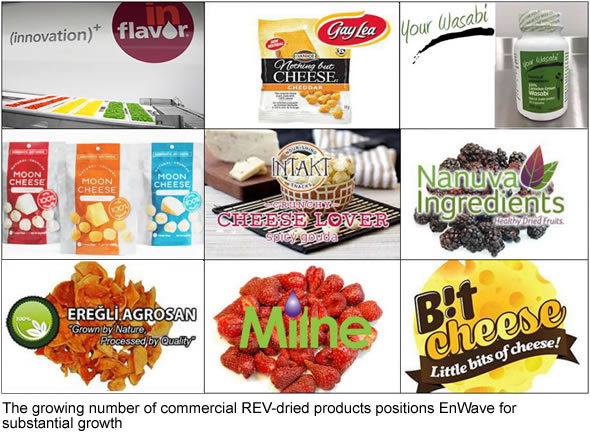 In the fruits category, Natural Nutrition has positioned itself as a leading provider of 100% natural dried fruits with colours, shapes, flavours and nutrients very similar to those of fresh fruit. These are used in the snack food, functional food, nutraceutical and cosmetics industry in Latin America, the United States, Asia and Europe.

In addition, the MicroDried products by US based Milne Fruit have been gaining traction with a growing network of customers. Also, Turkish company Ereğli Agrosan, which obtained the right from EnWave to process a variety of fruit, vegetable and cheese products, is progressing rapidly, as it produces products for the food, cosmetic and health sectors.

On average, royalty streams from partners vary between 2% and 10% on commercial products produced with a REV machine.

EnWave in the Spots

The Canadian Investment dealer Cormark Securities has resumed coverage on EnWave with a Buy rating and a $1.75 target.

Although we feel that the target is too low, as the report underestimates the number of future machine sales and subsequent royalties, it’s very positive that the well-known firm again introduces EnWave to its institutional investors.

Moreover, EnWave was also featured in Food Navigator, a daily online news service for the food and beverage markets.

A very interesting read in which Brent Charleton, SVP Business Development for EnWave was quoted saying, “The key difference between our radiant energy vacuum (REV) and the other vacuum microwave technologies being developed is that we’ve established a continuous, large-scale and reliable way of homogeneously drying product loads. Other players in this space typically offer smaller scale batch units whereas we’ve got to the scale where we can incorporate entry and exit lock systems to continuously introduce and remove organic materials through the process.”

The Company continues to progress with its royalty partners by receiving purchase orders for additional REV machinery to expand their royalty bearing production capacities. EnWave also advanced with several prospective royalty partners that are conducting initial testing and product development under TELOAs.

To date, EnWave has entered into eighteen royalty-bearing commercial licenses with major food processing and pharmaceutical companies. Plenty more are in the pipeline.

The commercialization of both powderREV and freezeREV technology platforms continued to progress during the first quarter, with EnWave advancing the design and manufacture of scaled-up versions of each platform for Sutro Biopharma and Merck. Installation and start-up of these machines is planned for 2017. If the installation of the powderREV and freezeREV platforms in the pharmaceutical sector yields superior performance to incumbent dehydration technologies, it will solidify EnWave’s value proposition with potential new partners in the pharmaceutical industry.

EnWave has started the year where it left off the previous one: with strong revenue growth. In addition, the Company is executing as planned with more TELOAs and royalty bearing commercial agreements.

Following quarters may still be a bit lumpy profit wise, but the Company has clearly set the pace for an outstanding 2017. Buy recommendation.