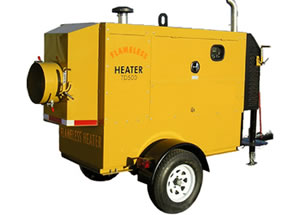 Example of a flameless heating device (not necessarily from the target company as the name is not yet disclosed), which uses a diesel engine to heat oil. The hot oil is then circulated to heat exchangers, providing a clean, pollution free discharge of warm air. The photo above shows a 600 - 900 BTU's unit, while Enterprise's target company has units of up to 3,000,000 BTU's.

Enterprise Group (E – $0.21 & 3EO – €0.138) is on an acquisition path. After signing a Letter Of Intent (LOI) to acquire a utility services & maintenance company a few weeks ago, Enterprise now has signed another LOI to purchase a company that rents out flameless heating equipment.

Similar to last month, the name of the takeover target wasn’t disclosed, but Enterprise did reveal other information about the deal and the company it intends to buy.

The private company, out of Alberta, was founded in 1998 and is an industry leader in renting flameless heaters to the construction and oil & gas industries in Western Canada. Its equipment ranges in heat output from 375,000 British Thermal Units (“BTU’s”) to 3,000,000 BTU’s.

Also some very interesting financial details were given. During the twelve consecutive months, ending March 31, 2012, the private company generated sales of $4.7 million resulting in an EBITDA in excess of $2.7 million and a net profit of over $2.0 million. Enterprise will pay $6.5 million for the company, which will be funded by a certain amount of cash, asset debt financing, 2,000,000 common shares of Enterprise Group valued at 25 cents per share and $1,000,000 in vender take-back financing to be paid over two years.

Looking at the entire picture, it’s clear this is terrific deal for Enterprise as it’s able to buy a company, which generates an annual profit of $2 million, for only $6.5 million. This acquisition alone would add more than 3 cents per share to Enterprise’s bottom line, not including the expected growth (see ‘Growth Plans’ below).

A Vendor Take-Back Financing is a type of loan in which the seller offers to lend funds to the buyer to help facilitate the purchase of the property or company. This type of loan is often used in the housing market where it’s called a ‘Vendor Take-Back Mortgage’. The take-back loan usually represents a secondary lien on the property or company, as most buyers will have a primary source of funding other than the seller. In most cases, the take-back mortgage is offered at an interest rate below regular market rates.

Enterprise’s strategy to grow the new company is similar to what its done with previous acquisitions: inject capital to expand manpower and equipment where needed in order to service a larger customer base.

The Company has already successfully done this when it bought A.G. Grant in 2005, growing its revenues from $7 million to $22 million in just one year. And repeated this feat in 2007 after it bought T.C. Backhoe & Directional Drilling Inc.

Growth plans for the potential acquisition of the utility services & maintenance company, which was announced last month, are similar. This company is complimentary with Enterprise’s existing T.C. Backhoe & Directional Drilling subsidiary as T.C. Backhoe provides directional drilling and installation of new underground power, telecommunications and natural gas lines, while the target company specializes in maintenance, servicing and integrity testing of existing utilities.

Enterprise Group will pay these acquisitions, and their expansion plans, with its new $12.5 million finance facility with the Canadian branch of PNC Bank.

Enterprise expects to close the flameless heating company acquisition on or before September 14, 2012, which is only a few days away.

The coming quarters look very robust for Enterprise Group. When the results for the third and fourth quarter are only as good as those in 2011, the Company will add 3 cents per share to its bottom line, or 4 cents in total for fiscal year 2012. Of course, 3 cents per share for the second half of 2012 is the absolute minimum as it doesn’t include any organic growth nor any contribution from acquisitions.

After the acquisitions of the flameless heating and utility services & maintenance companies are closed, we’ll start work on an update Company Report for Enterprise Group. Our initial Company Report (pdf) has a price target of $1.17. So it’ll be interesting to see what effect the new acquisitions have on the Company’s valuation. In the meantime, this remains a buy recommendation.