For a junior resource developer, a well-funded treasury is one of the most important factors that contributes to a successful outcome. Since Chatham Rock does not have current operations to supply recurring cash flow, the Company depends on raising capital through periodic equity offerings. A couple of weeks ago, Chatham Rock reported closing a small placement to raise gross proceeds of nearly $600,000.

While the total dollar amount of the deal is perhaps not a big deal, the placement is sufficient to fund the next important milestone for Chatham Rock: recommencing the reapplication process for the Marine Consent (environmental permit).

Meanwhile, a subsequent equity placement has been announced at the exact same terms of the recently closed offering, with the provision that existing shareholders as of June 19, 2018 may participate. This will enable Canadian shareholders to buy units of the placement using the Existing Shareholder exemption, and this will open a wider pool of investors to the deal beyond the previous placement that was limited to accredited investors.

While the Company has secured approval to raise as much as $10 million in the offering, realistically the plan is to achieve subscriptions in the range of $1 million and ensure that existing shareholders may access the pricing for units at $0.25 and including an attached half warrant with a $0.45 exercise price.

The Company announced that it is now moving forward to resubmit the application to secure Marine Consent which in turn is necessary prior to the commencement of an offshore mining operation. Although a Mining Permit for the Chatham Rise project has already been granted and remains in good standing through to 2033, the Marine Consent permit is critical to move forward with development. 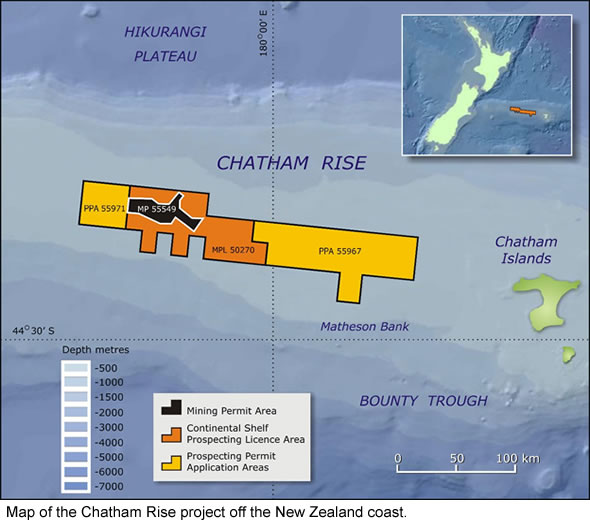 The first stage in the application process is a review that will consider all the available data, including information that was assembled during a previously attempted application. Various stakeholders that may be affected by the planned operations will also be consulted, including Maori stakeholders, other users of the oceans, and residents on the nearby coastline. A Scoping Study will then be submitted to the EPA, in order to obtain feedback from the regulator on the required content for the marine consent application, ensuring it is consistent with the expectations of regulators, other government agencies and Maori and community stakeholders. This study is being completed by Renee Grogan.

Ms. Grogan is an expert in this field, with over twelve years of experience in terrestrial and deep ocean mining, and who currently serves as a Director of the World Ocean Council, and an advisor to bodies including the World Bank, European Union, and International Seabed Authority. With previous work experience on behalf of government agencies and also private industries, her background includes participation in the permitting process, and also in an advisory capacity to resource extraction companies towards the priority of sustainable development. Grogan is an ideal choice to present a thorough report on behalf of Chatham Rock that will address the concerns of the EPA.

The preliminary phase of the application is scheduled to be submitted by November 2018. Thereafter the panel will review the planned mining operation and present its feedback to be delivered prior to the end of this year. Chatham Rock will then be in position to proceed in earnest with the approval process early in 2019.

In other news, Chatham Rock was pleased to participate in the National Field Days (Fieldays) Event early June. As the largest agribusiness event in the Southern hemisphere, this provided an opportunity for the Company to present its business plan to industry representatives and local farmers that are the prime beneficiaries of a phosphate extraction operation.

The event generated positive response from the participants, and allowed Chatham Rock to showcase the water and soil quality benefits from access to high quality, low cadmium phosphates that would be produced from undersea mining at the Chatham Rise project. Given that commentary from interested individuals will be considered during the Marine Consent application process, the positive reaction to the business plan is potentially significant.

Chatham Rock also interacted with existing shareholders at Fieldays, and reached out to market its story to potential new investors that may also wish to participate in the latest equity placement.

The Chatham Rise project represents a large, undeveloped resource of essential phosphates that are in demand for agricultural fertilizers to increase agricultural yields. As an offshore resource, there are several additional stages that must be successfully completed in order to achieve production, and Chatham Rock is working to navigate through the process and advance the project along the development curve.

With the successful closure of an equity placement earlier in June, the Company has secured the funding to apply for the necessary Marine Consent permit. A subsequently announced equity offering under the same price terms will allow Chatham Rock to raise additional funding.

Attendance at an important agricultural industry event enabled the Company to build further support for its aspirations. Showcasing the appeal to local New Zealand residents that may be the beneficiaries of a large, desirable resource just offshore, the Company was also able to invite new investors to consider buying shares of the stock.

All of these activities contribute towards successfully advancing the project, and perhaps towards securing the Marine Consent approval that will open the door to enable the prospect of undersea phosphate mining operation to become a reality. With each phase that is achieved, the risk level for the overall project declines and the upside potential for Chatham Rock is enhanced. Management has demonstrated its commitment to continue working to resolve each stage of the process with the goal of ultimately achieving production at Chatham Rise. Recommendation: BUY.