News » Charles & Colvard – A True Gem in the Making

Charles & Colvard – A True Gem in the Making

Charles & Colvard, Ltd (CTHR $1.27) is the original and leading worldwide source of moissanite gemstones. The Company’s goal is to position moissanite as an affordable, luxurious alternative to other gemstones, such as diamond.

Natural moissanite is only found in minute quantities on Earth. Charles & Colvard’s manufacturing process however mimics nature. Gem-grade Silicon Carbide (SiC) crystals are grown slowly, subjecting them to tremendous heat and pressure for days until crystals of moissanite take shape. Then each stone is cut and polished by master craftsmen. Only the stones with the best clarity are chosen to become one of Charles & Colvard’s gemstones. The Company has an exclusive supply agreement for silicon carbide crystals with Cree, Inc. (CREE).

Moissanite stones are available in three color grades: colorless (Forever One brand), near-colorless (Forever Brilliant brand), and faint color (Forever Classic brand). All these gemstones surpass the fire, brilliance, and sparkle of diamonds, but retail for only a fraction of the cost.

C&C’s Moissanite is sold as loose stones or set in a wide variety of quality metal setting options. Moissanite jewelry is sold in fine jewelry stores, on domestic and international shopping networks, in catalogs, at home parties, and online.

Moreover, C&C has recently introduced gemstones with an unprecedented color and its distribution continues to expand.

In addition to carat size, important characteristics of a gemstone are rarity, durability, and beauty.

And the beauty of a gemstone is characterized by its color, brilliance, and fire. Diamonds come in a variety of colors, some of them highly prized (pinks, blues, even yellow). However in a white diamond, the presence of a yellow tint will lower the price. The less body color in a white diamond, the more true color it will reflect, and thus the greater its value.

GIA grades diamonds on a scale of D (colorless) through Z (light color). All D-Z diamonds are considered white, even though they contain varying degrees of color. True fancy colored diamonds (such as yellows, pinks, and blues) are graded on a separate color scale.

GIA is the oldest, largest, and one of the most respected independent laboratories in the world, issuing certifications for diamonds in the form of a Grading Report or Dossier.

Moissanite jewels have a unique combination of brilliance, fire, durability, and rarity. Moissanite’s beauty is objectively derived from its refractive index, which is higher than other gemstones, including diamond, and its hardness is greater than all known gemstone materials except diamond.

In September 2015, C&C introduced its Forever One gemstones, a true game changer in the industry, because the stones are colorless. So far, the Company had only been able to produce Forever Brilliant near-colorless (G-H-I), and the original Forever Classic faint color (J-K) gemstones. Now thanks to recent technological advancements, the first colorless grade D-E-F Moissanite stones were produced.

Forever One is the ultimate innovation in a colorless gemstone that is the end-desire of consumers who seek to own a colorless gem that would usually be completely out of their reach monetarily.

The stones have been very well received. In fact, during the third quarter of 2015 more than 10% of the Company’s total sales were Forever One.

The Company’s wholesale business operates through a broad range of channels, including jewelry stores, online retailers, television shopping networks, department stores, and catalogs. The wholesale loose jewel business has historically been the largest percentage of total sales, and this trend has continued despite significant growth in the wholesale finished jewelry business that was launched in 2010. For the years ended December 31, 2014 and 2013, the wholesale distribution segment represented 81% and 90% of our total consolidated net sales, respectively, of which wholesale loose jewel sales comprised 59% and 71%, respectively.

C&C also sells moissanite stones and finished jewelry through its direct-to-consumer Moissanite.com e-commerce website. The Company is convinced that its e-commerce sales channel will not only add to top-line revenues in a significant manner, but will also play a key role in increasing overall consumer awareness of moissanite. For the years ended December 31, 2014 and 2013, the e-consumer segment represented 13% and 9% of total net sales, respectively.

In the direct-to-consumer home parties segment, finished moissanite jewelry is offered under the Lulu Avenue brand. Since sales of moissanite are highest when the consumer is educated about its attributes and has the opportunity to see and touch it, home parties are an excellent venue for selling product and expanding consumer awareness. Lulu Avenue was test launched in April 2012. This segment generated 6% and 1% of total net sales during the years ended December 31, 2014 and 2013 respectively. 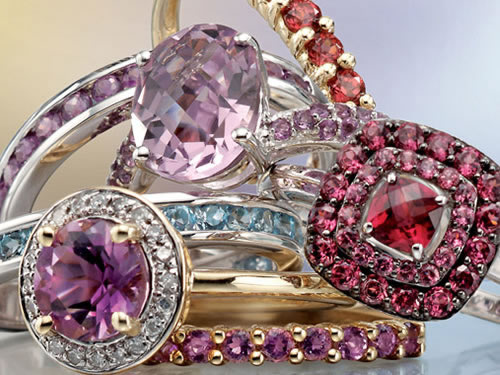 Tejmohan Sawhney, Vice President/DMM, Jewelry at Boscov’s said, “This is a great opportunity for Boscov’s Department Stores as we believe that Charles & Colvard Created Moissanite is a fantastic incremental business for our fine jewelry department. Our customers will love the large stone settings that moissanite provides at such an extraordinary value and we believe introducing this beautiful gemstone during the holiday season is a great benefit for Boscov’s. We believe this gemstone is exactly what our customers are looking for.”

In addition, the Company recently launched its Forever Brilliant jewelry at an undisclosed nationwide U.S. retailer for a 50-store test.

Effective December 1, 2015, Suzanne Miglucci will become the next President and Chief Executive Officer of Charles & Colvard. The current CEO will retire as of that date.

In order to excel in today’s retail environment, understanding omni-channel marketing and distribution strategies is key. This is exactly the forte of Ms. Miglucci. She was ChannelAdvisor’s Chief Marketing Officer since 2012, and previously held executive marketing positions at SciQuest, MicroMass Communications and Arsenal Digital Solutions.

Neal Goldman, Executive Chairman of the Board of Directors of Charles & Colvard commented, “As corporations strive to optimize the customer experience and gain market share in an increasingly complex digital marketing space, it is no surprise they are turning to their marketing bench to lead the charge. With our decision to appoint Ms. Miglucci, Charles & Colvard joins the ranks of other brand name market-leading companies which have also recently appointed marketing executives to their helms. We believe Suzanne, as our new President and Chief Executive Officer, will advance the Company to its next levels of success.”

Net sales for C&C’s third quarter, ended September 30, 2015 increased 44% to $6.5 million compared with $4.5 million in net sales during the same period of 2014. This improvement was primarily due to the launch of the new colorless gemstones Forever One.

The Company’s net sales of loose jewels increased approximately 23% to $2.9 million in the third quarter and comprised 44% of sales, compared with $2.3 million or 51% of sales in last year’s third quarter. Finished jewelry net sales during the third quarter of 2015 were $3.7 million, an increase of 66% as compared to the same quarter in 2014.

Cash and liquid investments totaled $5.6 million at September 30, 2015, an increase of $1.6 million from approximately $4.0 million as of December 31, 2014. The Company has no long-term debt and has not utilized the $10 million credit facility it entered with Wells Fargo at the end 2014.

We believe that Charles & Colvard is ready for a true growth spurt in coming quarters, thanks to several recent and upcoming events.

Sales in the Company’s third quarter of 2015 were up 44% and gross margins improved 1,200 basis points to 40% in the same quarter. Much of the sales growth was derived from the new colorless Forever One gemstones, which were only launched in September 2015. We expect to see lots more from this best-in-class brand.

In addition, since online retail sales are increasingly important, we’re convinced that the Company’s new CEO will be able to boost sales through that channel.