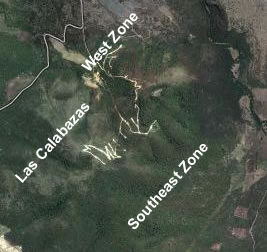 Satellite image of the Cerro Jumil property in Mexico with its three gold dominant zones: the Southeast, Las Calabazas and the West Zone. Gold associated silver mineralization is mainly concentrated in the West and Las Calabazas Zones.

Esperanza Resources (EPZ – $1.54) completed an additional 4,000 meters of drilling on its Cerro Jumil gold/silver property in the State of Morelos, Mexico. The drilling concentrated on the area between the Las Calabazas and West Zones and is part of a 15,000 meter drill program that commenced in April of 2011.

The results of the 23 drill holes, shown in the table below, clearly indicate several interesting mineralized veins.

The new 15,000 meter drill campaign, which is aimed at expanding and upgrading the currently defined gold resource of Cerro Jumil, will bring the total meters drilled at the property to over 56,000.

At this moment, the drills have moved to the southwest edge of the Las Calabazas Zone and additional drilling will also be done to further define the West Zone.

Golder Associates, a third party consultant, is working to update the Preliminary Economic Assessment (PEA) for Cerro Jumil, which should be published in the course of the current quarter. The PEA will be based on the resources announced in September of 2010 and will unfortunately not include the expanded results from the current drill campaign.

As part of the Preliminary Economic Assessment, Esperanza recently completed additional metallurgical tests under simulated heap-leach conditions. Approximately 18 tonnes of mineralized material was used to construct three 20-foot tall columns. One column was filled with uncrushed material and the other two columns were filled with material crushed to -50mm and -20mm respectively. Results showed that crushing the material to -50mm (approx. 1 inch) provides the best results with gold and silver recovery around 76% and 25% respectively.

Heap leaching is an industrial mining process to extract metals and other compounds from ore. The mined ore is usually crushed into small chunks and heaped so it can be irrigated with a dilute alkaline cyanide solution to dissolve the valuable metals.

The solution then percolates through the crushed ore until it reaches the storage pond. The leach solution containing the dissolved minerals is then collected and treated in a process plant to recover up to 90% of the target mineral.

The dilute cyanide solution is either re-used in the heap-leach-process or sent to an industrial water treatment facility where the residual cyanide is treated and residual metals are removed.

With an ongoing drill program to evaluate areas adjacent to the known resources and to fill-in areas that are still classified as inferred resource, the resource estimate for Cerro Jumil is bound to be expanded. Additionally, the shortly expected updated Preliminary Economic Assessment will bring the property one step closer to production. Esperanza Resources is a buy recommendation.

Read our full Company Report on the Company, click here.