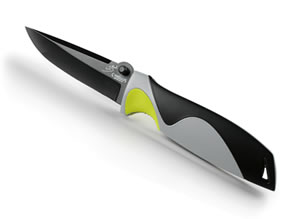 The SK Desert is a mid-sized folding knife and is part of the Camillus Les Stroud signature series.

Camillus knives has received orders from several mass market retailers for its regular line of knives and the Les Stroud signature series. First shipments are commencing this month. Moreover, new products like the Westcott Scissor Mouse and paper trimmers along with the increased distribution of Pac-Kit products to mass market clients are also expected to be big contributors to the growth.

Next to rising revenues and earnings, increased distribution and new product introductions, Acme United’s growth story is also supported by a 7 cents quarterly dividend, which at today’s share price is an annual yield of almost 3%. This is why Acme remains a safe investment, even at uncertain times.

We expect sales to reach $82.5 million in 2012. Taking into account that we expect gross margins and taxes to remain fairly stable, we estimate earnings per share to reach $1.02, or an increase of 12% compared with fiscal year 2011. We reiterate our buy recommendation for Acme United Corp. with a short term price target of $13.71, which is more than 38% above today’s stock price.