This is the final post in a three-part series about EnWave Corp’s (TSXV:ENW) most significant clients, the influence of their REV dried products on the market, and the impact of their success on EnWave’s sales and earnings.

The previous two weeks, we covered Milne Fruit Products, Inc, a processor and global supplier for the industrial food ingredient and beverage markets; and Ereğli Agrosan, a Turkish company that produces high value natural products for the food, cosmetic and health sectors.

This week, we feature NutraDried LLP, which develops, manufactures, markets and sells 100% all-natural cheese snacks under the Moon Cheese brand.

NutraDried is somewhat of a special customer for EnWave, as the latter holds a 51% stake in the company through it daughter EnWave USA Corporation. The remaining 49% of NutraDried is controlled by ND Creations, a private company majority owned by a former director of EnWave. 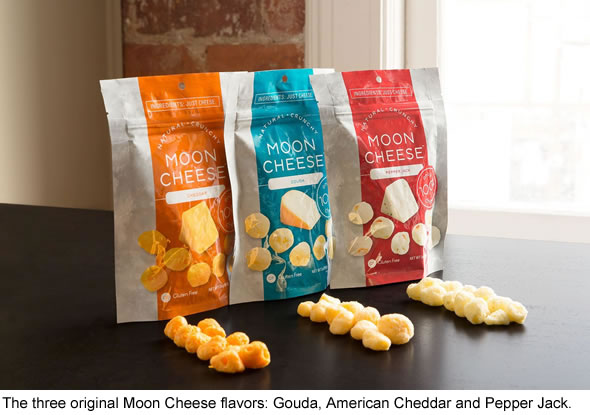 Launching Moon Cheese in two of the most well-known grocery banners in the Pacific Northwest was the perfect opportunity to build brand awareness and test several in-store promotional plans.

After starting production on a smaller unit, the LLP soon installed a 100kW nutraREV machine in its facility in Ferndale, Washington, which has been producing commercial products since.

Since then, its distribution has expanded very rapidly. The cheese snack is now available at over 30,000 stores across the United States and Canada. A few of months ago, NutraDried confirmed that Moon Cheese would be sold at Ahold supermarkets, which are known under brands as Stop & Shop, Giant Food Stores, Martin’s Food Markets, and Peapod. In addition, Moon Cheese distribution was also broadened to stores of 7-Eleven.

Moreover, very soon the snack will be available at 2,000 Rite Aid pharmacy stores, 1,600 CVS stores, and 440 Targets in the United States.

The subsidiary’s strongest accomplishment so far however, is that Moon Cheese snacks are available at Starbucks. The adventure at the world’s largest coffee chain started mid-July 2015, when the cheese snacks became available at approximately 3,400 Starbucks locations in the United States, as part of a 16-week long trial.

Earlier this year, Starbucks switched the Pepper Jack flavor to the new Mozzarella Moon Cheese. Total sales of Moon Cheese at Starbucks seem to have stabilized at a high level.

The advantage of NutraDried being a 51% daughter of EnWave is that exact sales and earnings numbers are publicly available.

Knowing that EnWave had total sales of $14.93 million in FY 2016, it is clear that NutraDried is currently the biggest contributor to the Company’s results.

With NutraDried’s ever increasing distribution, the big question is when a second large scale REV dryer will be needed to continue to meet demand.

But obviously, EnWave not only benefits from selling REV machines to the joint venture, it also receives an attractive revenue-based royalty of 5%.

Moon Cheese is currently available in four flavors: Gouda, American Cheddar, Pepper Jack, and Mozzarella. Other flavors are being tested and may be launched in the future.

Finally, it is also worth noting that the success of Moon Cheese has been instrumental to attract other food companies worldwide to launch their own dried cheese snack produced with REV technology. Next to NutraDried, seven other companies have a Moon Cheese like variety either in development stage or on the market.