Relatively quiet summers are common within the junior mining sector. Nonetheless, important updates have been issued recently by partner companies from Globex Mining Enterprises Inc. (CA: GMX – $0.92 & US: GLBXF – $0.70 & GER: G1MN – €0.69) as work continues at several projects. In addition, Globex reported this week that it has acquired another attractive property holding in Quebec as part of its strategy to maintain a full pipeline of transaction candidates.

Through staking, Globex secured 100% ownership of a property featuring the Pointe-Aux-Morts dolomite deposit. This land holding is located on the north shore of the Saint Lawrence River near the town of Havre St-Pierre. Within the property boundary, a historic, non-compliant resource of more than 23 million tonnes has been documented grading 20.5% MgO, 30.5% CaO and 0.92% SiO2. The resource was based on 56 drill holes completed in 1980-81 by QIT Iron and Titanium, a previous operator of the project.

A separate report for the project was published in 1992 based on a preliminary study of the deposit. In this study an independent analyst concluded that the deposit had good potential, envisioning a production scenario of 400,000 tonnes per annum of crushed carbonate rock, plus a potential 200,000 tonnes per year of magnesium oxide.

Of note, the deposit is believed to be free of contaminants and deleterious elements such as arsenic, asbestos or sulphides. Therefore, material sourced from this deposit could be of value for a variety of industrial applications, including iron and steel production, refractory uses, agricultural additives, and water decontamination. Globex plans to review all historic data for the project and consider follow up work to bring the data up to contemporary reporting standards.

Globex secured most of a historic silver mining district in Germany in 2017 with the acquisition of the Braunsdorf License. The land package covered an area of 164 square kilometers and included an extensive epithermal vein system. Numerous formerly producing silver mines had been developed throughout this district during a span of hundreds of years. Globex completed preliminary exploration to validate the resource potential. The project was vended to Excellon Resources [EXN] in 2019. The transaction enabled Excellon to earn 100% ownership of the project for a total consideration of $500,000 in cash plus shares of Excellon valued at $1.6 million, over a 3-year term. Excellon subsequently renamed the project the Silver City Property. 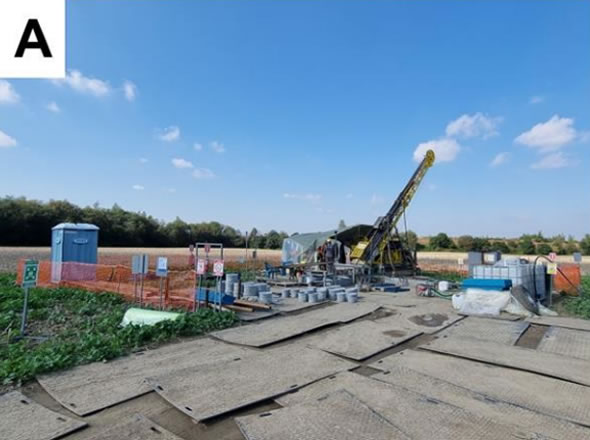 Drilling activities during the 2021 campaign at Silver City.

Last month, Excellon presented an updated Technical Report for the Silver City project. This report, prepared by an independent consulting firm, documented numerous work programs proposed for Silver City as part of the overall exploration effort. These detailed items include step out drilling further along strike and below historic resource zones at historic mine locations, as well as exploration drilling at interpreted contact zones of structural targets. Geophysical survey programs are also recommended including aerial mag and high-resolution chargeability and resistivity surveys. Additionally, soil geochemical surveys are planned for certain portions of the property and anomalies from previously completed soil sampling work were highlighted for follow up. Globex is in agreement with the various exploration work programs suggested in the report to enable Excellon to continue efficiently advancing the project.

Globex retains a 3% GMR on precious metals and a 2.5% GMR on all other metals produced from this property. In addition, upon filing of a resource estimate, Excellon agreed to issue a $300,000 cash payment to Globex. Following a successful mine development, a further payment of $700,000 shall be issued to Globex.

When Voyageur Metals Inc [VONE] acquired its Mont Sorcier project, the resolve to advance through to a development decision was part of the strategy. This commitment included completing exploration work to confirm and delineate iron ore and vanadium resources. Successful infill drilling achieved numerous high grade intervals as part of this objective.

Voyageur has now reported a resource estimate for Mont Sorcier based on the upgraded data presented through this work program. Data was compiled separately for the North and South deposit areas. The technical report documented an impressive increase of 565 million tonnes to the Indicated resources, most of which was defined in the North Zone of the deposit.

The resource estimate documented total Indicated resources for the project amounting to 678.5 million tonnes with an average of 27.7% magnetite plus 0.20% vanadium. In the Inferred resource category, a further 546.6 million tonnes was reported bearing 26.1% magnetite and 0.17% vanadium. Following conventional processing, this mineralization is estimated to generate a concentrate grading 65% iron along with 0.52% vanadium pentoxide.

With the report of this compliant resource estimate, the next milestone along the development curve is the completion of a full bankable feasibility study. Voyageur has targeted Q1 of 2023 for the release of this study, which represents the next critical phase prior to the decision to commence the construction of a mine. Established commodity trader Glencore plc has pledged financial support for the project.

Globex retains a GMR of 1% on Mont Sorcier for all iron ore produced from a successful mine development. Globex shareholders furthermore benefit from a successful outcome at Mont Sorcier through ownership of nearly 12 million shares of Electric Royalties Ltd. [ELEC], and their 1% GMR held on the vanadium production from this project.

With the latest property acquisition this week, Globex now controls a suite of over 210 separate property assets, including 89 royalty holdings. Many of the projects are already advancing in partnership arrangements through previously completed transactions. This asset base has contributed to create significant shareholder value in recent years as numerous deals have been announced involving the issuance of large cash and share payments to Globex. The addition of the Pointe-Aux-Morts dolomite deposit represents yet another property that may be attractive for a future transaction partner.

The ongoing advancement of the Silver City and Mont Sorcier projects by partner companies validates the successful Globex strategy. The Company has secured capital gains at the front end of these deals and retains leverage through subsequent payment events and royalty interests as the projects remain active. Also of interest, the ongoing work commitments and planned exploration programs for these assets are fully funded by the partner companies. As long as work continues the potential for a production royalty is enhanced and yet this is entirely risk-free as there is no funding obligation payable by Globex.

The fall and early winter months are often the busiest exploration season for junior mining and exploration. While newsworthy events continue to be reported during the summer, the pace of activity is likely to increase shortly. This may provide further catalysts for renewed speculative interest in the stock as transaction partners continue with their exploration objectives. Globex remains abundantly funded with cash and no debt on the balance sheet. The stock currently trades in an attractive value range with the prospect for further upside in the months ahead. Smallcaps Recommendation: BUY.