The 331kW TEDOM CHP system was installed at The Dome leisure center in Doncaster, UK. Under the terms of a 15 year agreement, the leisure center buys the efficient energy produced by the system from EuroSite Power at a rate guaranteed to be lower than if it were to buy directly from the British national grid. The center is estimated to save around $700,000 (£532,500) over the next 15 years.

The startup is also excellent news for EuroSite Power, as it can now begin to earn revenues from the installation. In addition, next year the Company can apply for additional Enhanced Capital Allowance (ECA) incentives from the UK government resulting from this installation.

The contract with The Dome, originally agreed with the customer in March 2016, is the first of its type to be funded by Societe Generale Equipment Finance following a project financing agreement with EuroSite Power.

Speaking about the project, EuroSite Power’s Chief Executive Officer Dr. Elias Samaras noted, “The Societe Generale financing was put in place to enable EuroSite Power to deliver larger and more frequent installations of our On-Site Utility projects. Doncaster Dome is much larger than most of our projects prior to the agreement with Societe Generale, demonstrating the amazing contribution of our financial partner to our future expansion.” 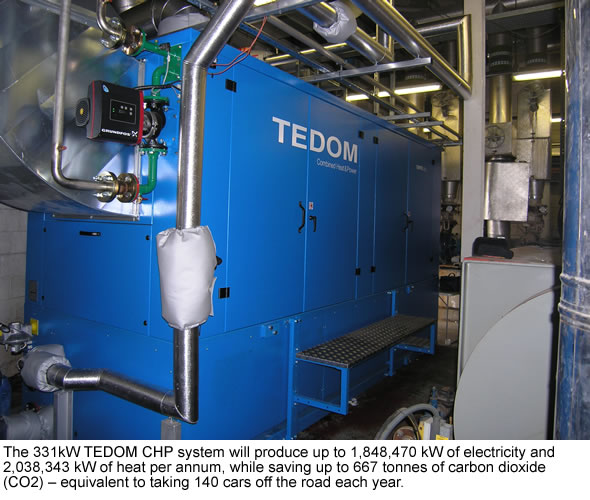 With 32 systems up and running, the current contracted project backlog is 6 systems for a total of 990 kW in capacity. Bringing the total number of systems under contract (both operating and in backlog) to 38, totaling 4,498 kW of capacity for a combined lifetime contract value of approximately $102.12 (£70.3) million on a local currency basis. Two more systems are scheduled to come online in 2016.

Take On Larger Projects Thanks to Financing

Before these financing agreements were in place, the Company used to entirely fund the cost of the CHP and the installation of the unit at a customer’s facility. In order to do so, it relied on equity financing. However, that approach limited the Company’s ability to grow. Now thanks to these two agreements, the Company can handle much larger projects both in system size (kW) and in terms of the number of sites.

The credit approval process basically goes through three stages. First, EuroSite Power, along with the financing group, have a process that enables them to pre-screen potential customers and projects. They basically, look at each project and its future cash flows. In addition, they research the credit worthiness of the possible customer.

When the outcome of the screening process is positive, the next step is to get an indicative assessment from Macquarie or Societe Generale while also continuing negotiation with the customer. At this stage certain documents and information have to be provided to the financial institution. Typically within two days, the finance group responds with information such as the interest rate at which it wants to offer the loan, the monthly payment, the termination structure, etc. Although this is a formal response to EuroSite Power, it’s not yet a credit approval.

This final credit approval step occurs after the customer indicates that it wishes to sign an On-Site Utility agreement with EuroSite Power. At that moment, the Company applies for a formal credit approval, and Macquarie or Societe Generale subsequently commits the funds.

Once the unit is installed, the lender, either Macquarie or Societe Generale, will refund EuroSite Power all costs associated with the purchase and the installation of the unit. From then on, the project will pay off the loan in monthly installments, typically over 5 years. This is obviously a major advantage for the Company, as it now has an almost unlimited access to funds from two major financial institutions for projects which meet the financing criteria.

Combined Heat and Power equipment does not automatically qualify for an ECA benefit. In order to qualify, a machine needs to meet certain standards. Once a certificate of energy efficiency has been granted, the installation can qualify for an ECA incentive payment. EuroSite Power is exceptionally efficient in this matter, as in fact all its installed units meet or exceed the quality standard and have qualified for an ECA. This is a true quality measure and adds credibility to the Company’s team and its installed units.

In May 2015, EuroSite Power received its initial Enhanced Capital Allowance funds from the UK government for the years 2012 and 2013 in the amount of approximately $625,000. In January of this year the Company received close to $360,000 cash in ECA incentives for 2014.

In other news, EuroSite Power has been selected as a finalist in two categories at the prestigious Association for Decentralized Energy (ADE) Awards 2016.

With over 100 members in the United Kingdom, the Association for Decentralized Energy brings together interested parties to develop a strong, dynamic and sustainable environment for a range of technologies, including combined heat and power, district heating networks and demand side energy services.

There are eight award categories in total. EuroSite Power has been shortlisted for both the Commercial / Public Sector Project of the Year Award and for the Customer Engagement Award.

In the first category it will compete with the Kingfisher Leisure Centre project against seven other nominees. In October 2015, EuroSite Power started up a 125 kW Combined Heat & Power system at the Kingfisher facilities in Sudbury, UK.

Estimated savings for the customer are in excess of $20,156 (£12,598) per year, with no capital or maintenance costs, as they are all covered by EuroSite Power.

In the second category, EuroSite Power competes with the Haverhill Leisure Centre project against three other companies. In 2012, the Company reached an agreement with Haverhill to install an InVerde 100 kW CHP system, along with a unit to provide air-conditioning to a number of the leisure centre’s fitness suites and its cafe area. Similar to Kingfisher Leisure Centre, the systems are installed and operated by EuroSite Power, which retains ownership of the equipment on site.

The reason why a project from 2012 was nominated by ADE, is because for this particular award the long term benefits for the customer are key. At Haverhill those benefits are very real and clear, as the leisure centre has been able to reinvest the savings generated by the installation of the CHP into a new gym and power room refurbishment and upgrade.

The award winners will be announced at a ceremony on 23rd November 2016 at The Natural History Museum, London.

Even if the Company doesn’t win, these selections provide unbiased recognition of how EuroSite Power’s solutions represent a pioneering way to help customers access the benefits of CHP in a way that is demonstrably superior to other methods of sale.

The financing arrangements with Macquarie or Societe Generale clearly pay off. The 331 kW project at The Dome would most likely have been too large for EuroSite Power to handle without the financing structure.

Moreover, because the Company can now handle the installation of larger units, it will move towards being cash flow positive faster.

As we wrote last week, EuroSite Power’s stock price rebounded nicely after the sell-off without any fundamental reason. The stock climbed more than 22% the past week. We expect that it will continue its rise the following weeks, back to more reasonable levels. Buy recommendation.