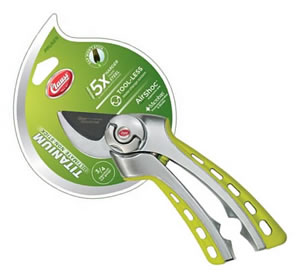 An entire family of Clauss Garden Tools is set to enter stores later this year and early 2011.

Sales to the office channel on the other hand were slow. Although they were higher compared with the third quarter last year, they were weaker than the Company wanted them to be. Sales to Staples were good, but sales to Office Depot were pretty soft. The reason for this is simple, companies aren’t hiring, so they need less new equipment.

At first glance, this looks pretty bad, but there’s a little catch to these numbers. See, both the third quarter of 2010 and 2009 include an extraordinary item.

In 2009, third quarter earnings include a one time pre-tax income of $458,000. This was a bonus because the remediation of the Company’s old Bridgeport property, which was sold in December 2008, went much better than originally projected.

That’s a whole lot better than a 16% decline, which is what you get when you simply look at the numbers and don’t dig a little deeper.

Balance Sheet – Affected By Back To School And China

Two items on the above balance sheet stand out.

More important, because it isn’t a momentary increase, are the Company’s inventories. They are more than $2 million higher compared with last year and are most likely to increase some more.

The reason is that Acme United, like most other companies, continues to experience labor shortages in its Chinese factories and is therefore increasing its inventories. Although this is a burden on the Company’s cash position, it also has three big advantages.

A few noteworthy trends for the fourth quarter and first half of 2011.