The team learned that the diamond sharpening tools brand has plenty of growth opportunities, both in the number of market segments where the products are offered, as well as in the number of customers. Moreover, they discovered where potential synergies are possible.

Getting to Know the DMT Market and Customers

The International Hardware Fair in Cologne, Germany is a major bi-annual event for the hardware industry. This year, the 3-day show attracted around 2,670 exhibitors from 55 countries, and approximately 44,000 people from 124 countries attended the fair.

The main goal for Acme United at the show was to get acquainted with the customer network of DMT in Europe. To make the transition as smooth as possible, Mark Brandon, the former owner of the sharpener brand, also attended the fair. This way, customers left the meeting with confidence that Acme will continue the successful DMT strategy.

The few changes that will be implemented are to the advantage of European customers. For example, as of June 1st, 2016 Acme will warehouse all DMT products in Germany. This way, delivery times will be much shorter, as in the past European customers had to order in the US. In addition, customers won’t have to worry anymore about currency fluctuations, as Acme United Europe will offer the products in euro instead of US dollar. 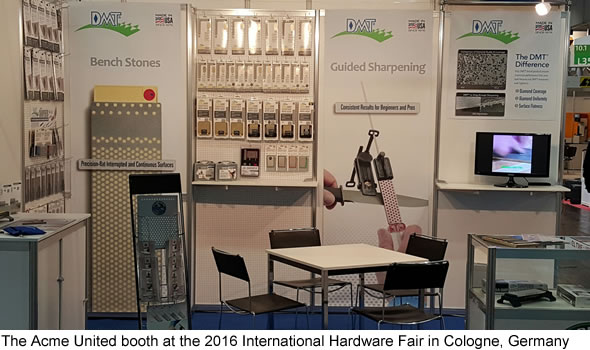 While speaking with the current customers, the Acme team soon found out about the expansion possibilities for the sharpener brand. For instance, existing customers are very interested in DMT products for sports & hunting purposes. In fact, the famous polka dot sharpener has already won seven Knife Accessory of the Year awards from Blade Magazine.

Also, there are lots of opportunities for DMT in the kitchen area. As a result, Acme will immediately start to pursue new customers in those areas.

In addition, although DMT already has some market share in very special niche markets, such as ice skating and skiing, those areas will receive more attention from Acme in the future.

A final conclusion from the Hardware Fair is that lots of Clauss tools, such as industrial scissors and cutters, fit ideally in the DMT customers’ range of products. Additional Clauss sales should emerge from this.

The IWA OutdoorClassics, held each year in Nuremberg, Germany is the largest European trade fair for hunting, shooting sports, outdoor and security equipment. The fair attracted 1,455 exhibitors and welcomed more than 45,000 visitors, both record numbers. 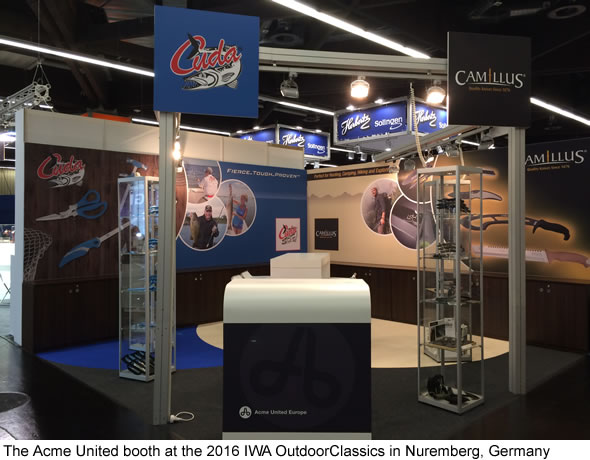 At IWA, Acme United had two booths. One for Camillus and Cuda, and the other one for DMT. Basically, IWA was used to strengthen the distribution network of Cuda and Camillus and to intensify the customer base of DMT. Interestingly, both customer segments showed great interest into the other product group.

The high number of attendants to both shows indicates that the sport and outdoors industries are doing well, and that there are ample growth opportunities.

In the background of a solid industry, the Acme United team confirmed that DMT is a well-known and highly respected brand. Thanks to conversations with about 90% of DMT’s European customers, it’s clear that solid expansion is possible in number of customers and addressable markets.

In 2015, DMT had revenues of $5.4 million and EBITDA of approximately $1.0 million. We foresee double digit growth for the brand in 2016. Buy recommendation.