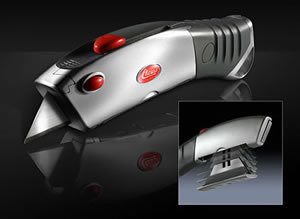 The SpeedPak is now being sold at major industrial distributors, catalogs and at online stores.

On Friday, Acme United Corporation (ACU – $7.20) announced sales and earnings for the first quarter ended March 31, 2009. As expected, those numbers were soft due to a reduction in orders from many of the Company’s customers as a result of the contracting global economy.

However, the Company did manage to remain profitable thanks to a series of cost cutting measures that were implemented and that will result in annualized savings of more than $1.5 million.

Walter C. Johnsen, President and CEO said, “Our sales declines were across the school, home, office, and industrial markets. Nearly all our customers purchased less in the first quarter of 2009 compared to last year. We have cut many expenses including incentive pay, travel, telecommunications and legal fees, but continue to fund our next generation of products.”

During the conference call management said Acme United gained 5 large mass market industrial and hardware accounts during the past six months who are now placing orders.

Management also said they recently started shipping their SpeekPak Utility Knife to a major do-it-yourself chain where it has a prominent place at eye level. What is very encouraging is that re-orders are already coming in.

Looking forward to the following quarters, Mr. Johnsen said, the Company is seeing an uptrend in the order rate as the 2nd en 3rd quarter are historically stronger due to back to school shipments. Additionally, the next generation non-stick cutting tools will be on the market when the back-to-school season starts.

Looking a bit further ahead, management said they have a broad array of new items which will be brought to market in September of 2009.

Mr. Johnsen ended the conference call with saying it was a frustrating quarter. Although the Company made some good progress with gaining new customers and introducing products, they simply didn’t sell as much as they did last year due to economic reasons, and that’s something you can’t control.

Acme’s first quarter was soft mainly because customers reduced their inventories. However, those inventories were at an unusual low at the end of February/early March and since then customers have started to re-order.

It’s encouraging that we hear this story with many other companies as well. So I hope these are the first signs of the economy slowly picking up speed again. Obviously, that would be positive for Acme United as it could start to produce stronger sales and earnings numbers again.

Two more positive notes are that the Company’s SpeedPak is being well received in major chains and that a series of new products will hit the market later this year. ACU remains a buy.