A Sunny Message from Rainy Mooseland 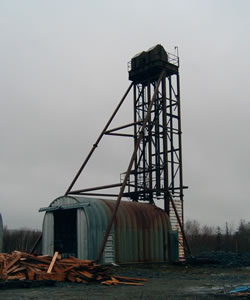 It rained the entire day when I visited Mooseland on Monday. Luckily, the friendly and heartwarming Nova Scotians made up for it.

Earlier this week I spent a couple of days in Nova Scotia. After hearing and writing about NSGold’s (NSX – $0.54) properties for so long, I wanted to see with my own eyes what they were all about. I was fortunate to get a tour around Mooseland – NSGold’s most advanced gold project – from Glenn Holmes (CFO) and Perry MacKinnon (Chief Geologist).

Mr. MacKinnon explained the complex vein structure at Mooseland really well. Remember that most of the gold deposits in the area host gold within quartz veins. It’s surprising that even the vein structures of the West Zone and East Zone (only separated by the Tangier River) are very different.

This explains why the first gold rush at Mooseland, back in the 19th century, only lasted a few years. Next to the veins that were visible on the surface, it was simply impossible for the early gold diggers to locate the gold.

After NSGold announced the strong resource estimate for Mooseland’s West Zone, earlier this month, I received an e-mail asking how it was possible that these results were 80% higher than the estimates of previous owners of Mooseland. Well, the above explanation applies here as well. Due to the complex vein structure, those companies didn’t have a full understanding of Mooseland’s subsurface. And because of various reasons they pulled out before their work was completed.

Now NSGold will finish the job. 26 holes were drilled late last year. And based on those results an updated resource estimate and work outline for both the West and East Zone will be produced.

In the next few weeks we will get an updated resource estimate for Mooseland’s East Zone. I honestly cant wait to see those results. Remember that findings from previous owners indicate that the East Zone contains more gold than the West Zone.

Based on the updated reports for the West and East Zone, NSGold will initiate an additional drill program during the summer to fully understand the entire structure and the property’s potential.

The first results from the West Zone prove that Mooseland’s potential is much greater than first anticipated.

Additionally, my visit to Mooseland has convinced me even more that NSGold has a very capable team and that good things are ahead.