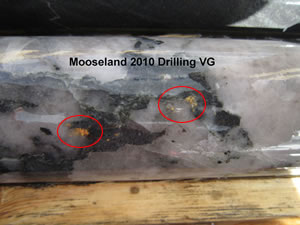 Again good news from NSGold (NSX – $0.49) as the Company received an NI 43-101 compliant resource estimate for the East Zone of its wholly owned Mooseland gold property in Nova Scotia, Canada. In May, the Company already received a resource estimate for the other half of the property, called the West Zone. So now the estimation for Mooseland is complete.

Inferred gold resources for the West Zone and East Zone together are estimated at 390,000 ounces of gold. The estimate is based on drill core assay results from NSGold and the previous owners of Mooseland, Hecla Mining and Azure Resources. In total, 40,371 meter was drilled in 167 holes.

Based on these results, 101 mineralized zones, many consisting of multiple veins, were identified in the Mooseland gold deposit. Many veins are tens of centimeters wide while other parts are up to several meters wide.

390,000 ounces of gold is a solid result. Knowing that the Company used conservative criteria to reach this number, makes it even better.

While this article is published, budgets and drilling schedules are being developed by the Company’s geologists. In the next few months more drilling will be conducted both at the West and East Zone of Mooseland.

Remember that NSGold’s 2010 drill program was designed to confirm the historic data from previous owners and to get a better understanding of the property. In order to do this, all 26 holes were drilled within the parameters of known ore zones defined by earlier programs. So no drilling was done outside the known historic limits.

That will be different this time as drilling will be focused on delineating and expanding the mineralized zones.

At this moment I still see lots of upside potential for Mooseland’s resource estimate for the following reasons:

The beauty about a mining property is that the resources that you find today will also be there tomorrow. They’re not going away. The only thing that can happen as more work is conducted and more data is collected, is that the resource estimate increases. It can’t possibly decrease.

One variable that we have to take into account is the price of the commodity, in Mooseland’s case: gold. Again, we have a sound foundation here as the resource estimate was calculated very conservatively. So in case the price of gold declines, it will only have a limited effect on Mooseland’s potential.