3 Reasons Why We Expect Acme United to Continue to Excel 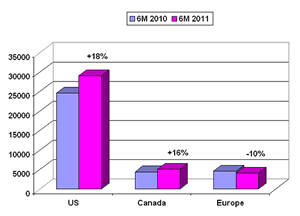 Sales breakdown per segment in thousands of dollars for the first six months of FY 2011 and FY 2010. The US and Canadian segment grew 18% and 16% respectively. Sales in Europe declined 10%, but are expected to pick up during the second half. Source: Company Filings.

Since mid August, Acme United’s (ACU – $10.10) stock has risen over 6%. A true achievement amid this market turmoil, thanks to its solid fundamentals, a 3% dividend and strong outlook.

In the U.S., net sales rose by 22% in the second quarter compared to the same period in 2010 mainly as a result of strong iPoint Pencil Sharpener sales and Pac-Kit, which contributed about $1.8 million.

In Canada, sales increased by 15% in the second quarter compared with last year, thanks to growth in office products sales, increased distribution channels and a good reception of the AirShoc garden products.

In Europe, sales decreased by about 20% compared with last year, but are expected to pick up strongly in the second half of 2011. In fact, mass market promotional sales, new business in the manicure and office channel along with the deep cost reductions will make Europe profitable during the remainder of 2011.

Acme United’s balance sheet remained relatively stable compared with June 30, 2010. The Company had a current ratio of 3.94, a return on equity of 9.65 and working capital of $39.23 million.

To show confidence in the business and the market, Acme’s Board of Directors increased the Company’s quarterly dividend with 1 cent to 7 cents per share. At today’s share price, that’s an annual yield of almost 3%, which is substantially higher than the interest rate you earn on a regular savings account or a 10-year bond.

Our overall guidance for fiscal year 2011 remains at $70 to $75 million in sales and $1.00 to $1.05 earnings per share with potential upward revision in the following report thanks to increased business and possible higher gross margins than first anticipated. Based on our calculations, we reiterate our buy recommendation for Acme United Corp. with a price target of $12.98, which is about 40% above today’s stock price.