News » Will Acme United Reach $100 Million in Sales for the First Time in its History?

Will Acme United Reach $100 Million in Sales for the First Time in its History?

Organic sales for the third quarter increased approximately $3.5 million, or 16%, year over year. This was mainly driven by strong back-to-school sales where iPoint pencil sharpers excelled, increased Camillus knives distribution where Les Stroud continues to do well and first aid sales. Recently acquired First Aid Only, contributed about $4.3 million in sales during the quarter and is on target to meet its goals for this year.

During the conference call, following the announcement of the third quarter results, Walter C. Johnsen, Acme United’s Chairman and CEO, gave sales guidance for 2014 of between $107 million and $109 million. If all goes well this will be the first time in the Company’s history that it generates $100 million in sales. The Company foresees earnings in 2014 of $1.34 per share, slightly down from the previous estimate, because there will be one-time costs for the move of the corporate headquarters in the United States and Hong Kong. For 2015, Mr. Johnsen expects Acme to reach $125 million in sales.

Acme United reports financial information on three separate business segments: the United States (including Asia), Canada and Europe. And although the U.S. segment has historically been the largest, it continues to be the fastest grower.

In the U.S., sales during the third quarter increased by an astonishing 41% compared to the same period in 2013, thanks to increased sales of first aid products, additional sales resulting from the acquisition of First Aid Only, Inc. and increased sales of Camillus knives.

Net sales in Canada for the three months ended September 30, 2014 increased 23% in U.S. dollars and 28% in local currency compared to the same period in 2013. The increase in sales is primarily due to strong back to school sales, higher sales of Camillus knives and the introduction of new lawn and garden products.

In Europe, net sales for the three months ended September 30, 2014 decreased 5% in both U.S. dollars and local currency compared to the same period in 2013. The decrease in sales can be attributed to less promotional sales to mass market chains. Sales of back-to-school items, office products and medical instruments on the other hand increased nicely.

Solid Balance Sheet Despite Acquisition and Purchase of Warehouse

The Company’s bank debt less cash on September 30, 2014 was $24.5 million compared to $13.2 million on September 30, 2013. During the past 12 months, the Company acquired First Aid Only, Inc. for approximately $13.8 million, made capital improvements to its new distribution facility in Rocky Mount, NC for $1.5 million and paid $1.0 million in dividends on its common stock.

During the same 12 months period, the Company generated $5.0 million in cash flow from operations and sold its Fremont, NC plant for $0.8 million.

The Accounts Receivable is up about 37% compared with last year, but that’s due to the 41% increase in sales. Also, the rise in Inventories of only $2.2 million despite the sales growth, the increase of available products and the acquisition of First Aid Only is impressive.

First Aid Only Integration On Track

First Aid Only (FAO), in its first full quarter after being acquired by Acme, contributed $4.3 million in sales and was accretive. In the coming months the acquisition is expected to start generating cost savings as a result of the higher combined volumes that Acme will achieve. This should lead to lower negotiated freight costs, increased purchasing power for raw materials and access to new customers.

The integration of FAO into the Company and into Acme’s two existing first aid brands, Pac-Kit and PhysiciansCare, is going smoothly. The initial goals of combining the sales forces and expanding the offerings have been completed.

Next on the agenda are the reduction of duplicate products between the three first aid brands and the integration of Acme’s computer system at FAO. In addition, some of Acme’s first aid production, that’s currently takes place in other facilities, will be transferred to the First Aid Only site to reduce fixed costs.

Since Acme donated 150,000 disposable respirator masks last week to help fight the Ebola outbreak, it received many inquiries from cities, police departments, as well as from medical and industrial distributors.

The first cases of Ebola diagnosed in the United States and Europe have made it painstakingly clear to cities and government institutions that they need to be prepared.

This is where Acme’s first aid brand Pac-Kit can be very helpful because it has medical supplies such as face masks, gloves, isolation gowns, eye and face shields, and clean up wipes readily available. 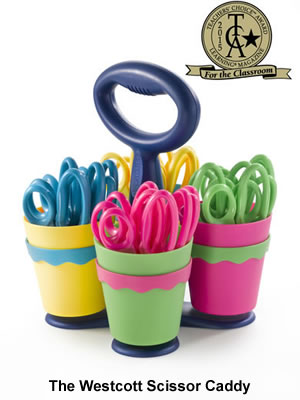 In other news, Learning magazine announced that the Westcott Scissor Caddy with Blunt Scissors won a prestigious 2015 Teachers’ Choice Award for exceptional quality and outstanding performance in an educational setting. The product was selected based on teacher and in-classroom feedback and teacher recommendations.

This innovative product helps to keep classroom scissors, school tools, and art supplies organized and is designed with four colorful, removable cups for easy storage and supply distribution. The Scissor Caddy comes with 24 scissors and the caddy and scissor handles are all infused with an anti-microbial product protection to inhibit the growth of bacterial odors.

For 20 years, the Teachers’ Choice Awards have heralded the very best in classroom-tested, teacher-recommended products. Each year, a nationwide panel of teacher-judges names the standouts in books, classroom supplies, educational games, software, websites, and more. After receiving top ratings in two rounds of rigorous judging, the winners are chosen.