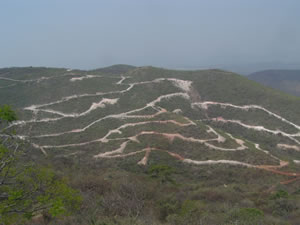 View of the drill roads on the Las Calabasas zone at Cerro Jumil.

Esperanza Resources (EPZ – $1.15) announced more positive analytic results from its 100% owned Cerro Jumil gold project in Morelos State, Mexico. The results were from infill drill holes (see map below) and intersected gold mineralization with values between 0.43 grams and 2.98 grams of gold per tonne.

An updated resource estimate, based on 63,000 metres of drilling, compared with only 41,000 metres in the previous estimate, is expected to be published in the course of this quarter.

Based on those results and the recommended work in the report, Esperanza initiated a new drill program in April of 2011 to both upgrade areas with an inferred resource by infill drilling, and to expand the resource by step-out drilling. Since then, 22,000 additional metres have been drilled with overall solid gold grades.

Additionally, lots of successful infill drilling was conducted between the West Zone, Las Calabazas Zone and Southeast Zone, which undoubtedly will move much of the previously inferred resource to the measured and indicated categories.

All these positive analytic results from both step-out and infill drill holes should lead to a significant expansion of Cerro Jumil’s resource. We also believe that the percentage in the measured and indicated categories will be higher (80% in the 2010 estimate), thanks to the large amount of infill drilling conducted since.

Moreover, Esperanza still has two drill rigs operating at Cerro Jumil to drill the Southwest Extension and Colotepec Zones. Based on initial analytic results from these areas, described above, it’s fair to assume that the resource will be expanded even more. In fact, it wouldn’t be a surprise when the following resource estimate moves the property to 2 million gold equivalent ounces.

All in all, Esperanza Resources is definitely one of the most undervalued commodities stocks out there with little downside risk. We have a price target of $3.78 on the stock. I’m adding shares to my position at these low valuations.