News » What A Week For EnWave!

What A Week For EnWave!

Next to the 7,500 Starbucks corporate stores in the US where Moon Cheese is already available, the coffee chain will start distributing the 100% all-natural cheese snacks to its 1,400 corporate stores in Canada as well. In addition, Moon Cheese will soon be available at Wallgreens, the largest drug retailing chain in the United States, and at several other major grocery store chains, such as Ahold.

In other news, EnWave received a milestone payment from Merck to start manufacturing a freezeREV machine designed to provide high-speed dehydration for live and active organisms in vials. The agreement with Merck could be worth several million dollars in the future.

Distribution of Moon Cheese is expanding very rapidly, especially since last August, when Spire Enterprises became the exclusive distributor of all NutraDried products in the United States. Two months ago, the cheese snack was sold at about 9,400 locations. Now, two months later, availability has grown to over 23,600 stores.

Most recently, NutraDried confirmed that Moon Cheese will be sold at all 8,000 Wallgreens stores in the United States. They will also be available at Ahold’s 700+ supermarkets, which are known under brands as Stop & Shop, Giant Food Stores, Martin’s Food Markets, and Peapod.

When Starbucks started selling 2oz packs of Cheddar and Gouda Moon Cheese snacks in July 2015, it was immediately clear they were a big hit. And sales continue to outperform at the coffee chain. They have even exceeded the forecasted buy plan by as much as 30%. No wonder they keep increasing distribution.

A success story, such as Starbucks’, opens doors of other retailers. We wouldn’t be surprised if distribution of Moon Cheese continues to expand by thousands of stores in the following months.

Don’t forget that NutraDried is working hard to bring other healthy dried snack products, such as nutrition and energy bars, to the market. Also for these snacks Spire Enterprises will be the exclusive distributor in the US.

In December 2014, EnWave signed a Research and Development agreement with Merck, one of the world’s leading pharmaceutical, chemical and life science companies. Under the terms of the 10 year agreement, both parties established a work plan for the production of a specifically designed non-GMP freezeREV dryer. Merck should bear all the costs associated with this process.

Good Manufacturing Practices (GMP) are the practices required in order to conform to guidelines for manufacture and sale of food, drug products, and active pharmaceutical products. These guidelines provide minimum requirements that a pharmaceutical or food products manufacturer must meet to assure that the products are of high quality and don’t pose any risk to the consumer or public.

Good manufacturing practices, along with good laboratory practices and good clinical practices, are overseen by regulatory agencies in the United States, Canada, Europe, China, and other countries.

The idea was to evaluate EnWave’s REV technology as a viable replacement for lyophilization in the pharmaceutical industry. More specifically, the developmental work and testing has focused on the potential of dehydrating several vaccinations.

Freeze drying, technically known as lyophilization, is a dehydration process typically used to preserve a perishable material or to make the material more convenient for transport. Pharmaceutical companies often apply freeze drying on products such as vaccines and other injectables.

Because lyophilization is the most complex and expensive form of drying, its use is usually restricted to delicate, heat-sensitive materials of high value.

Unlike lyophilization, freezeREV employs a combination of microwave energy with a low pressure environment to achieve rapid, highly controlled dehydration of live or active biological materials.

Tests conducted on a lab-scale freezeREV show that processing times are far less than with lyophilization, which dramatically reduces costs. In addition, the footprint of a freezeREV machine is sizably smaller than a lyophilizer. And finally, third party tests show no key differences between freezeREV and lyophilizer dried products. All in all, solid test results have been achieved, and EnWave has satisfied all of Merck’s requirements to proceed. 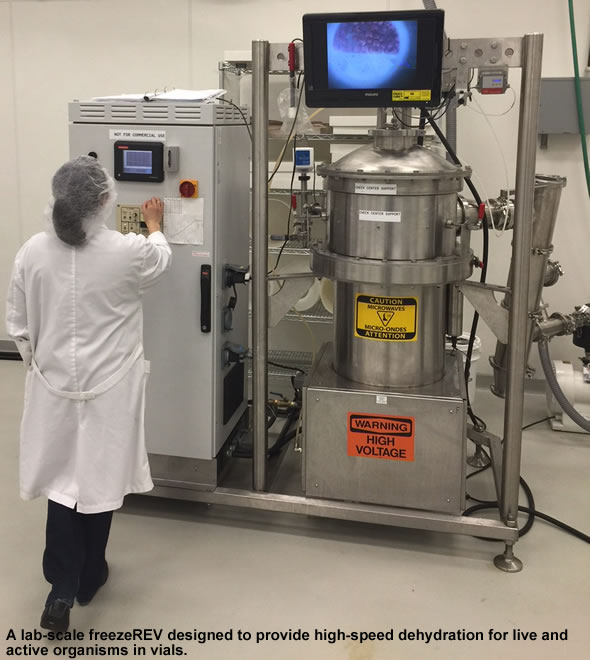 Now EnWave has commenced manufacturing a commercial scale freezeREV, for which it received an initial milestone payment from Merck. Additional milestone payments are expected on the delivery and start-up of the machine. In total we expect EnWave to eventually generate several million dollars of revenues from this deal.

When finished, the REV unit will enable further testing and advancement of the dehydration technology in the pharmaceutical industry. If all goes well, the idea is to augment the design to satisfy the GMP requirements (GMP certification). This would obviously require a more substantial investment from Merck to build such a machine. At that moment, Merck would be able to pursue FDA approval.

While Merck retains the option to exclusively license REV for the drying of several specific vaccines, the agreement is non-exclusive, which enables EnWave to pursue additional partners in the pharma field. This could ultimately help all biotechs in their potential future pursuit of regulatory approval for the use of REV, as the FDA will likely be more compelled to expedite the approval process if more than one company is lobbying for it.

The increasing distribution of Moon Cheese is very good news. It indicates that the sales momentum of the cheese snack is only just beginning. NutraDried’s revenues in the third quarter of 2015, ended June 30, 2015 reached $705,077, while they were only $37,223 in the comparable quarter last year. We expect this boom to continue for many more quarters. Sales of $5 to $6 million in fiscal year 2016 are certainly achievable for NutraDried.

Test results with freezeREV have been very encouraging, prompting the manufacture of a scaled-up REV machine for continued development and product testing. Although it will take some more time to develop and commercialize freezeREV, the agreement with Merck provides revenues for EnWave from the sale of the machine, and it again confirms the high potential of the technology when a giant like Merck decides to proceed after a long test period.

As we’ve shown in the past few weeks, EnWave is growing rapidly in several areas of the drying industry. Sectors such as fruits, meat and dairy are becoming pillars of EnWave’s success.

When EnWave publishes improved financials in the following quarters, plenty of investors will wake up and realize what a gem this Company truly is. Unfortunately for those investors, by then the stock will be trading at much higher valuations than today. Buy recommendation.