During the last several years Globex Mining Enterprises Inc. (CA: GMX – $1.16 & US: GLBXF – $0.91 & GER: G1MN – €0.88) has delivered a steady progression of lucrative property transactions. These deals typically involve payments of cash and shares of partner companies to Globex, which has contributed to build shareholder value. Option terms frequently require aggressive exploration commitments over specific intervals. As a result, a large roster of active projects is currently advancing, fully funded by partner companies. Positive results achieved along the way at these projects generate the potential for additional value creation through retained royalties.

Several partner companies have reported news this spring highlighting the enhanced value proposition for Globex. This week, Globex updated progress achieved by Manganese X [MN] at the Battery Hill project and by Orford Mining [ORM] with its ongoing exploration program at the Joutel Eagle project. Another batch of assay results was also reported this week by royalty partner Starr Peak Mining [STE] for the NewMetal project. In April, Labyrinth Resources [ASX: LRL] presented an update on its exploration program, as part of the ambition to resume mining at the Labyrinth Gold project. Globex holds royalty interests for each of these projects, so the positive news carries the potential for royalty income as work advances.

Aggressive exploration work is advancing at the NewMetal project by royalty partner Starr Peak Mining Ltd. Another batch of assay results was reported this week, including the discovery of a new horizon of enriched VMS style alteration. The news featured results from seven more drill holes targeting the Deep Zone of the deposit. These assay values were highlighted by a section spanning 12.5m bearing an average grade above 5% Zinc-equivalent content, including 1.01% copper. High grade chalcopyrite values above 15% were encountered in another drill hole, within an interval spanning 3.7m of core. The copper content is estimated above 5% within this section.

So far, numerous wide intervals with exceptional base metals grades have been reported in several batches of assay results since exploration work commenced. The scope of the drilling programs has also been increased several times and an additional drill rig was mobilized to the project.

Meanwhile, even as the overall deposit area continues to expand along the Normetmar trend, both along strike and to depth, Starr Peak reported a new discovery of another zone of VMS style alteration at the project. As the magnitude of defined resources continues to increase, the potential for a successful mine development is also enhanced.

Globex owns over one million shares of Starr Peak, and it also retains a 2.5% Gross Metals Royalty (GMR) held on the project that would become more valuable as the prospect of a mine development becomes more likely.

The Battery Hill Manganese project, controlled by Manganese X Energy Corp. is one of the most advanced prospects under consideration for development of a domestic manganese mine. This property was acquired from Globex in an option deal enabling Manganese X to earn 100% ownership in the project. Globex was paid a significant minority interest of shares in its partner Manganese X under the terms of this deal, and also retains a 1% GMR on the project. Manganese X proceeded with a drill program to further delineate the historic manganese-iron resource zones.

Manganese X presented a compliant resource estimate with attractive grades. Last year, the company commenced a Preliminary Economic Assessment for Battery Hill, which was presented on May 12th. The study demonstrated robust economics with a 25% IRR, for a mine development that could sustain operations for more than 40 years. The open pit mine plan envisioned in this study is projected to deliver lower operating costs over the life of mine, estimated at just $122 per tonne of material processed.

The next phase in the advancement of the project will involve establishing Pilot Plant testing. This program will determine the efficiency of a proprietary processing circuit designed to produce manganese sulfate without consuming selenium. If the circuit performs up to expectations using sample material from Battery Hill, the outlook to develop a new domestic manganese mine will come into focus. This would be a very positive scenario for Globex shareholders.

Positive exploration results were also reported by Orford Mining Corporation following its initial drilling program at the Joutel Eagle property. Located within the Abitibi Greenstone Belt in Quebec, the Joutel Eagle claims cover extensions of productive structural corridors. Several gold and base metals mines are located in close proximity to the property within this highly productive mining district. Historical drilling completed by previous operators of the project outlined the South Gold Zone, a significant area of enriched gold mineralization encountered for more than 700m along strike, and down to 500m depth.

Orford acquired this property from Globex in November of 2021, through an option deal involving three separate claims packages spanning a total area of roughly 50 square kilometers. Exploration drilling commenced shortly thereafter, to confirm the historic resource zones. Assay results were reported this week from the first two drill holes of this program. Both of the drill holes encountered high grade gold mineralization, highlighted by a section of 0.84m bearing 10.8g/t gold. Of note, this interval was much higher grade than the historical gold values encountered previously. Wider gold zones were also encountered closer to surface. Work continues and additional assay results are expected.

The option agreement is structured to provide Globex with a capital gain and also a potential back-end windfall through royalty leverage. To earn 100% ownership of Joutel Eagle, Orford must issue payments in cash and shares over a 5-year term, for a total of $1.65 million. There is also the commitment to complete significant exploration expenditures within that time frame, all fully funded by Orford. Globex retains a 3.5% GMR on the property, of which Orford may repurchase 1.5% for a cash payment of $2 million.

Efforts to resume development at the Labyrinth Gold project are continuing as royalty partner Labyrinth Resources focuses on underground exploration. Labyrinth is in the midst of a program of at least 5000m of drilling work designed to confirm historic resource zones of the JORC gold deposit. Step out drilling is also underway to outline additional gold discovery sections. More than 2000m of drilling had been completed as of the update presented in April. This work included eight drill holes, all of which intersected the targeted Boucher lode. Inspection of the drill core revealed that gold-bearing quartz veins had been encountered, within alteration ranging from 1.5 – 6 meters in width. Visible gold was also noted in the mineralized sections, another positive factor. 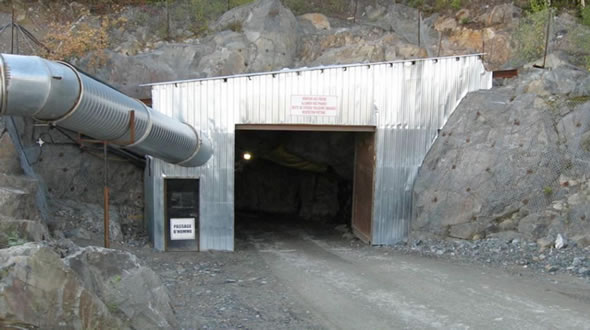 Underground sampling is also underway at exposed gold zones within mine workings developed by a previous operator of the project. These access points are expected to provide a head start for ore development to support the resumption of mining operations. Labyrinth aspires to complete a compliant resource calculation for the JORC deposit area. The company remains on track to present this report later this year.

The acquisition of the project by Labyrinth has restored the potential for sustained mining to continue. Positive exploration results to outline a larger gold resource will provide greater confidence for a successful outcome. Extensive underground and surface infrastructure at the project will support a faster development cycle when operations resume. This is good news for Globex shareholders as the Company retains a lavish 5% GMR royalty for the first 25,000 ounces of gold produced. Thereafter, a 3% GMR will apply to all subsequent mine output in perpetuity. The production ambitions of Labyrinth may thus contribute directly to a significant recurring revenue stream payable to Globex.

Globex assembled an attractive portfolio of property holdings as the foundation of shareholder value. However, it is the recruitment of motivated transaction partners to advance these projects that is the key to the Globex strategy. All four of the projects updated in recent weeks were originally held by Globex and then vended to partner companies. Each has delivered notable discovery success thereafter. Globex shareholders participate in this value proposition through royalty interests and minority ownership.

At Battery Hill, studies are in process to demonstrate the economic potential for development a domestic mine source for manganese. The potential life of this mine could span decades of operations, with the expectation of significant royalty payments due on all production. Another favorable aspect to Battery Hill is the significant minority ownership position of Electric Royalties Ltd. (ER) held by Globex. Globex transferred a package of royalties in a previous transaction, including a 1% GMR on Battery Hill.

Attractive high grade discovery results continue to be reported by royalty partner Starr Peak Mining at the NewMetal property in Quebec. A similar outcome is in play with work advancing at Orford’s Joutel Eagle project as confirmation of a large potential gold resource is now in process. Also, as Labyrinth continues work to enable productive mining to resume, Globex shareholders may anticipate the potential of a lucrative royalty payment stream from this project.

This update represents just a small selection of the various projects advancing under similar circumstances. Other transactions may be arranged in the months ahead to add to the pipeline of active projects. By securing a proprietary slice of many exploration pies, Globex is creating significant long-term value for shareholders. Smallcaps Recommendation: BUY.