While most explorers are fortunate to control just one high quality property, Blue Sky Uranium Corp. (TSXV:BSK – $0.13 & OTC:BKUCF – $0.10 & Fra:MAL2 – €0.09) has assembled a portfolio of several attractive exploration projects in Argentina, including 100% ownership of one large property that spans an entire uranium district. This affords the Company a tremendous opportunity to expand on the established resources within the project boundary and follow up along structural corridors for additional discovery potential.

The Amarillo Grande project, located in Rio Negro Province within the southern half of Argentina, is an exceptional candidate to establish a vast domestic uranium production source. Blue Sky has been active in this region since 2006 and the commitment to exploration has paid off with the discovery of the Ivana deposit which is now the largest NI43-101 compliant uranium resource in Argentina. Blue Sky is committed to an ambitious program to outline new resource zones within a trend spanning 145 kilometers where the Company has identified several highly prospective uranium targets.

A few days ago, Blue Sky reported highly encouraging exploration results from a program of pit sampling underway in proximity to the Ivana deposit area. Excavation of a series of widely spaced, shallow pits, roughly 2 meters in depth, is in process as part of a low-cost method for extensive sampling of soil horizons near surface. This program is active across an area of one kilometer along strike and 500 meters in width, to the west of Ivana.

Highlights of results from channel samples collected from pit walls with significant uranium or vanadium mineralization include:

With numerous reported sample intervals in hand bearing grades above 1,000ppm uranium and 500ppm vanadium, the economic potential for this new zone is significantly enhanced. The highest grade reported so far of 10,658ppm uranium (1.7% U308) from one pit is an immensely appealing highlight from what may be considered an excellent set of assay results so far. Work continues as a total of 133 pits are planned for this area. 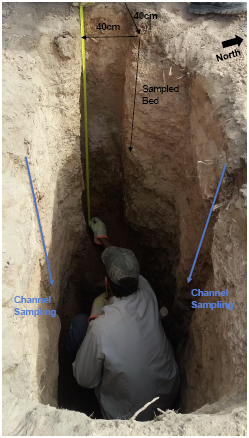 The pit sampling program at Amarillo Grande is on-going, with a total of 133 pits planned.

More assay results are expected to be reported from the program in December. If the assays continue demonstrating enriched uranium and vanadium content in line with the nearby Ivana deposit, the potential for this large area to become a new deposit zone increases. A subsequent drilling program can then follow up with the outlook to achieve a more significant discovery and provide the data necessary for NI43-101 reporting standards.

The pit sampling program follows on the heels of another batch of results announced from exploration work at the periphery of the Ivana deposit. Last month, Blue Sky reported on a reverse circulation drilling program completed for a large target area extending up to one kilometer south of the established deposit.

A total of 61 shallow drill holes were completed. This program demonstrated upside potential for expansion of the Ivana resources, as the drilling consistently encountered a near surface horizon between one to three meters in thickness, bearing enriched grades of uranium and vanadium.

Blue Sky will be able to update the compliant resource estimate for the project to include the additional drill data such that a much larger total deposit may be calculated. And with many more target areas still pending for future exploration work, it is very likely that the total resource endowment of this project will be significantly increased as the Company continues to advance the scope of its efforts.

As the magnitude of the total resource increases so too does the attractiveness of this project for development. The benefit of a larger resource would support the potential to extend the productive life of a mining operation and perhaps enable more intense extraction and higher quarterly production numbers. These factors generate a more robust return on the long term investment to build a mine.

While the presentation of a compliant resource estimate for the Ivana deposit earlier this year represented a milestone achievement for Blue Sky, the objective at hand is to advance towards establishing a development candidate to support a new uranium mine. To do so, the Company must continue to outline additional resource zones while completing studies to confirm positive economic factors that would contribute to the success and profitability of a mine plan.

The recent exploration work to the west and the south therefore is a very positive step forward as it has demonstrated very large additional zones of enrichment beyond the original deposit which may now be included when the next upgrade on the total resources is calculated.

Despite the presence of three nuclear power plants currently in operation and the intention to build two more in the country in the near future, Argentina does not currently have any domestic production for uranium. As an advanced explorer with a legitimate potential to define a development prospect that may become a uranium mine, Blue Sky is well positioned with support at various levels of government.

Another very appealing aspect to this project is the presence of vanadium, encountered along with uranium in the deposit areas. Increasing industrial demand for this metal has contributed to a surge in the price for vanadium to where it is now valued higher than uranium. Therefore the bonus of a significant vanadium by-product to this project adds a valuable economic component that further boosts the viability of a potential mine development.

A Preliminary Economic Assessment (PEA) study is underway to analyze the economic variables for the project and consider the optimum scenario for a potential mine development. Ongoing metallurgical testing of samples from the deposit is in process at the Saskatchewan Research Council (SRC). This data will contribute towards establishing recovery efficiency for a proposed heap-leaching circuit. If the results are favorable it will provide some of the most important information regarding the economic outlook for development. A leach pad recovery option is one of the lowest cost processing solutions for a future mine plan. The PEA will be completed shortly.

Meanwhile, within the Amarillo Grande property spanning more than 300,000 hectares, Blue Sky has identified an exceptional inventory of further exploration targets that will keep the Company busy for a long time to come, and perhaps yield even more attractive discovery results that make this entire project area even more attractive for a future mine development.

Uranium and vanadium has been encountered along a corridor extending more than 100 kilometers within Amarillo Grande, and that is just one of the properties controlled by the Company in Argentina. The legitimate potential to advance along the value curve and achieve a world class uranium deposit supports the speculative upside for this aspiring explorer. Recommendation: BUY.