The agricultural biotechnology Company Stevia First Corp. (STVF – $0.41) continues to lay the foundation to succeed with stevia, the all-natural zero-calorie sweetener that is rapidly transforming the food and beverage industry.

Since our introduction, both the Company and the stevia sector have made quite some progress, mainly because the trend towards calorie reduction and sugar reduction is growing, and is being accelerated by mounting clinical data and public health campaigns that are having an effect on consumer buying trends.

Stevia is a great enabler of this new shift in priorities as it is a truly zero-calorie, plant-derived sweetener. It continues to hold the promise of being the leading natural high-potency sweetener.

The sugar substitute market is valued at more than $11 billion annually. Stevia’s share of this market is expected to grow rapidly due to multinational food and beverage giants including it as an ingredient in hundreds of new products each year. These companies simply adhere to consumers, who are steadily increasing their desire to improve and maintain wellness through the consumption of natural, organic and healthier products.

Americans currently consume almost 15% of their calories from added sugars, while the World Health Organization (WHO) announced last year that the amount should be cut to 5% of daily calories, which is less than the amount found in a single 12-oz sugary drink.

So it’s no surprise that in the last year key members of the beverage industry, which consumes 31% of the U.S. sugar supply, announced calorie reduction plans and product launches that include stevia. 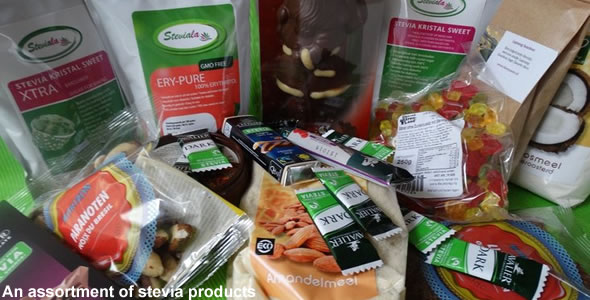 At the 10th annual Clinton Global Initiative, held in September last year, the three largest soda companies – Coca-Cola, PepsiCo and Dr. Pepper – even went as far as to pledge that they would reduce the number of sugary drink calories that are being consumed by 20 percent in a decade. Stevia will undoubtedly play a major role in that effort.

Basically, Stevia First’s goal is to enable a large and reliable global supply of stevia. This makes perfect sense, as increased and efficient supply will fuel even more global product launches and reformulations, which are already enabling calorie reduction on a massive scale.

In order for the Company to reach that goal, it has developed and patented novel methods of stevia production. Its proprietary bioprocessing methods for Reb A, the purified form of stevia most commonly used today, obtains two or three times as much stevia from the same amount of leaf, potentially achieving dramatic cost savings over its competitors.

What makes Stevia First even more unique is that next to its pioneering methods to extract stevia, it’s also making sure that there’s a constant and steady supply of stevia leaves. In order to do so, it has set up a collaboration with several grower partners in California.

During late August 2014, the Company harvested stevia fields at locations throughout California and the results indicated that local stevia dry leaf yields meet or exceed the average yields reported globally.

Stevia First’s CEO, Robert Brooke, stated, “We are very pleased with the results of our 2014 agricultural and extract production activities. We hit our primary objectives while continuing to expand our grower community. Stevia can be a valuable addition to the lucrative specialty crop market that California growers are so good at serving.”

Although it’s still a couple of years away, a North American supply chain, with notable advantages over overseas production, could set new standards for the industry in terms of energy efficiency, water conservation, and environmental safety.

Before the first dedicated North American stevia facility can be taken into production, Stevia First has commenced marketing its stevia products to multinational food, beverage, and ingredient manufacturers. In order to do so, it signed an exclusive distribution and licensing agreement with Qualipride International, a Chinese company with extensive stevia production capacity. With over 16 years’ experience in stevia extraction and refining practices Qualipride operates 6 production facilities through a variety of partnerships.

Stevia has emerged as a mainstream ingredient that is useful in the prevention of diabetes and obesity, and it has also been shown to be an effective alternative to help consumers abandon sugar.

The market for all-natural, zero-calorie stevia sweeteners is expanding rapidly, and the World Health Organization (WHO) estimates stevia intake could eventually replace 20-30% of all dietary sweeteners.

In the last two years Stevia First created a technology that can double or triple the global output of stevia. The Company is now better positioned than ever to become a premier global stevia supplier and the only large-scale producer in North America.

In addition, it signed a deal with Qualipride so it can immediately start commercializing stevia products. Even just one significant agreement with a beverage or food producer could quickly generate substantial revenues.

Although the Company’s stock price has come down somewhat since our initial recommendation, we continue to firmly believe in its future.