Moon Cheese continues to sell extremely well at Starbucks. In fact, the coffee chain has confirmed that it will expand the distribution of the all-natural cheese snack from 3,400 to 7,500 corporate stores and that it will extend the availability of the product into calendar year 2016.

This is excellent news for EnWave Corporation (TSXV:ENW – $0.85 CAD & OTC:NWVCF – $0.64 USD), as it owns 51% of NutraDried, the exclusive producer of Moon Cheese snacks for the United States.

We heard that in fiscal year 2015 NutraDried has grown from receiving an average of 13 purchasing orders per month to 130 POs per month currently. These include orders from Starbucks distribution outlets, and also from retail chains across North America. Sales are truly trending up on a month-by-month basis. Reports indicate that NutraDried is close to being cash flow positive.

Starbucks basically has three types of stores:
a) corporate stores, which can have a drive thru or be a complete walk-in store;
b) licensed stores, which are like corporate stores, but they are usually located inside another store such as Kroger or Target. In addition, they have a slightly different foods and drinks selection; and lastly
c) “We Proudly Brew” stores, which are located inside hotels, colleges, business, etc. These are not licensed stores and usually only serve Starbucks’ basic coffees.

Since mid-July 2015, 2oz packs of Cheddar and Gouda Moon Cheese snacks are available at approximately 3,400 Starbucks locations in the United States, as part of sixteen week long trial.

It was the intention that based on the trial period, Starbucks would determine if it was justified to continue selling the product. However, right from the start it was clear that Moon Cheese was a big hit, as comments on social media, blogs and forums were overwhelmingly positive. 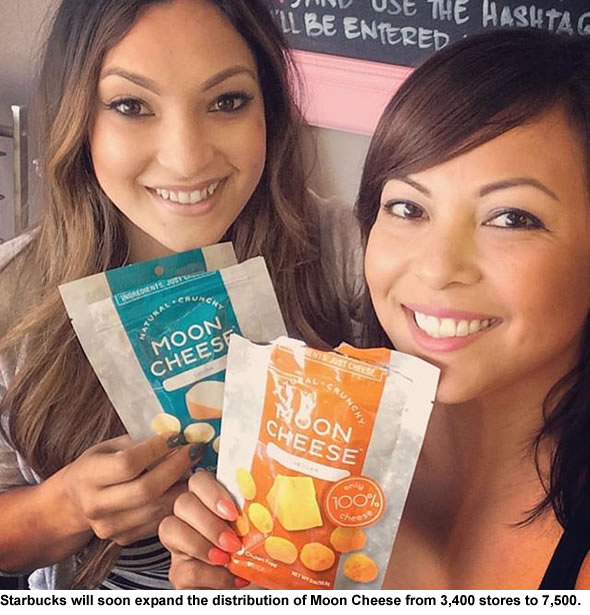 That positive impression was soon confirmed. NutraDried received over forty reorders from different Starbucks distribution outlets less than five weeks after the start of the trial. Moreover, a couple of weeks later, sales were going so well that Starbucks extended the availability of Moon Cheese until the end of 2015 at a minimum.

Sales of the cheese snack continue to outperform at Starbucks. They have even exceeded the forecasted buy plan by as much as 30%. As a result, the coffee chain has decided to expand and extend the availability of Moon Cheese.

Cheese Snacks Around the World

Next to Starbucks, Moon Cheese is available in more than 6,000 other stores across North America. And that number continues to in increase rapidly. Other food companies worldwide are sensing an opportunity and have signed agreements with EnWave to produce similar dried cheese snacks.

We’re convinced more cheese snack agreements for other territories will be signed shortly, as the snacks are an obvious success and food companies are eager to launch new innovative products.

At this moment, NutraDried produces all its snacks on a 100kW nutraREV machine, which has been producing commercial products since June 2014. We’re curious how long NutraDried can keep up with demand with just one dryer. Remember that EnWave benefits from receiving a revenue-based royalty of 5% from NutraDried, and also from selling REV machines to the subsidiary.

Moreover, we’re sure that other food and dairy companies are paying attention to Moon Cheese’s developments. Because of EnWave’s business model, it’s a matter of signing an agreement first before a competitor snatches away the exclusive rights for a certain territory. Similar agreements, such as the ones above, are most likely on the horizon.