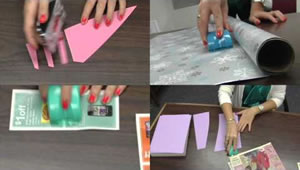 The Westcott Scissor Mouse, mainly used in arts and crafts markets, is one of those new items that contribute to Acme's rising revenues.

Acme United (ACU – $11.87) had good sales and earnings for the third quarter ended September 30, 2012. In fact, these were the Company’s highest third quarter numbers in its most recent history.

For the fourth quarter, sales are expected to remain strong, thanks to increased demand for Westcott iPoint pencil sharpeners, Clauss tools and Camillus knives. Also 2013 looks very promising, as Acme’s management foresees sales between $90 and $95 million for the year.

Net sales for the third quarter of 2012 in the U.S. segment increased 11% compared to the same period in 2011. This was mainly due to higher Camillus knives sales as the hunting season has commenced and the Les Stroud knives started shipping, and also thanks to a good contribution from C-Thru Ruler, which was acquired in June of this year. Noteworthy, is that Walter Johnsen, Acme United’s Chairman and CEO, mentioned during the conference call that C-Thru Ruler sales already reached about $900,000 in the third quarter, while $2 million was targeted for the entire year.

Moreover, revenues of iPoint pencil sharpeners, paper trimmers and first aid kits were higher as well during the third quarter.

Net sales in Canada for the three months ended September 30, 2012 increased 19% compared to the same period in 2011 thanks to increased sales of Camillus knives.

In Europe however, sales for the third quarter decreased 25% compared with last year, because of the recent liquidation of Schlecker, a German retailer where Acme mainly sold manicure products. The Company is very hopeful though that increased attention to European mass market retailers, like Lidl and Aldi, will offset most of the lost Schlecker business.

Acme United’s third quarter results, along with its short to medium term outlook, make us happy. All brands are performing very well. As a result, the Company’s management has already indicated that the fourth quarter will be strong.

Its recent C-Thru Ruler acquisition is already performing better than expected and other takeovers may be in the pipeline.

New products continue to be introduced. The Westcott Scissor Mouse, for example, looks like a computer mouse, but is used to cut paper. There’s a little tab under the tool that grabs and cuts the paper. It’s mainly used in arts and crafts markets to cut any lightweight papers and is expected to contribute nicely to sales in the coming quarters.